We will be using create-react-app to quickly setup a react application with basic dependencies installed.

Command to create the app

This will create folder named frontend containing all the basic files with dependencies installed.

commands to install the above

Below is the simple UI code which has

This is how it will look (No fancy colors or animations) 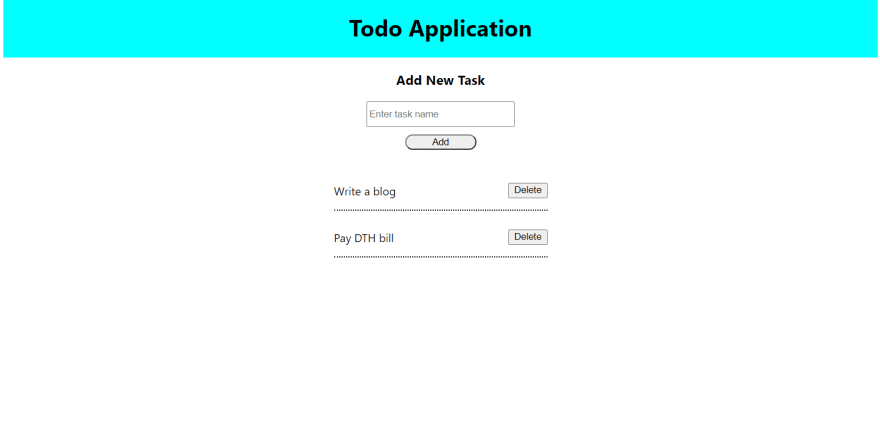 API handlers are maintained in a separate file.

It has
a. GET /tasks endpoint to get the list of tasks.
b. POST /tasks to create a new task.
c. DELETE /tasks to delete a task.

All the tasks are stored in-memory. The tasks data will be lost as soon the server is stopped.
(So, NOT exactly a FULL STACK application)

You can test APIs using a REST Client like Postman or simple CURL commands.

Even though the correct endpoints are mentioned in UI, it will not be able to reach the backend APIs due to CORS.

To solve this we need to use a proxy.
It is very simple to proxy the calls by just updating the UI package.json file.

Add the below configuration.

Now the UI should be able to connect to backend APIs.

Generating the UI bundle and serving it through express.

This is will create a folder named build in your frontend root directory containing index.html file along with JavaScript and CSS files.

This can be served using a static server like "serve" package.

BUT, the UI will not be able to reach backend servers.
BECAUSE, proxy feature is available only in development mode.

To solve this issue, we can serve the UI using same express server. YES you read it right. a single server to server both frontend and backend.

We can give the absolute path also, just keeping it simple here :)

Now start the express server. At '/' path the UI will be served and at other paths, the APIs will be available.

Deploying the application in a container.

Till now we have developed and deployed the application on local machine.

If you are a docker guy, then we can quickly deploy this application in a container as well.

Complete project is available at: https://github.com/SagarTrimukhe/todo-app