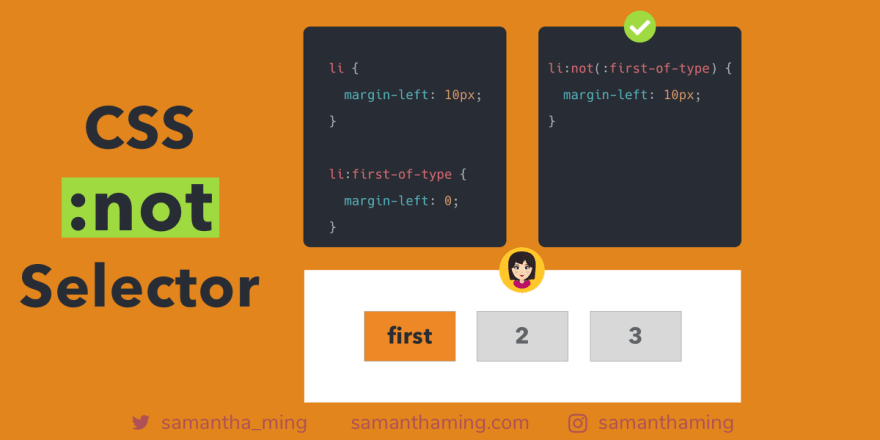 Instead of using 2 different selectors to assign styling and then another to negate it. Use the :not selector to select every element except those that match the argument you passed through 👍

In the current draft, CSS Selectors Level 3, you can only pass simple selector as your argument.

Rachel Andrew wrote a fantastic article explaining CSS Levels, I also linked it in the Resource section, so have a read if you're interested 🤓

In the current version, you can only pass in simple selectors as your argument. However, in CSS Selectors Level 4, you will be able to pass in a list of selectors. So cool, right 👏.

And here is what will be selected

One thing to point out is that negations maybe not be nested. So this is a no-no:

Let's start by defining them individually:

:first-of-type will select the first element of the type you specified. Even if it's not the first child of its parent. So a result will always appear if you use this selector (unless you picked an element that doesn't exist at all).

Alright, let's look at some examples.

Children are all the same type

Because the child type is all the same, the result is the same for both.

BUT because p is no longer the first child. If you call p:first-child, NOTHING will be selected.

So you might be wondering, what if I don't care about the type, I just want to select the first child of its parent. In that case, you can do this:

And this understanding applies to the other cousin classes:

The :not selector is supported by most modern browsers and Internet Explorer 9 and up.

I created my own Pure CSS Micro-Framework, a tale 🙃