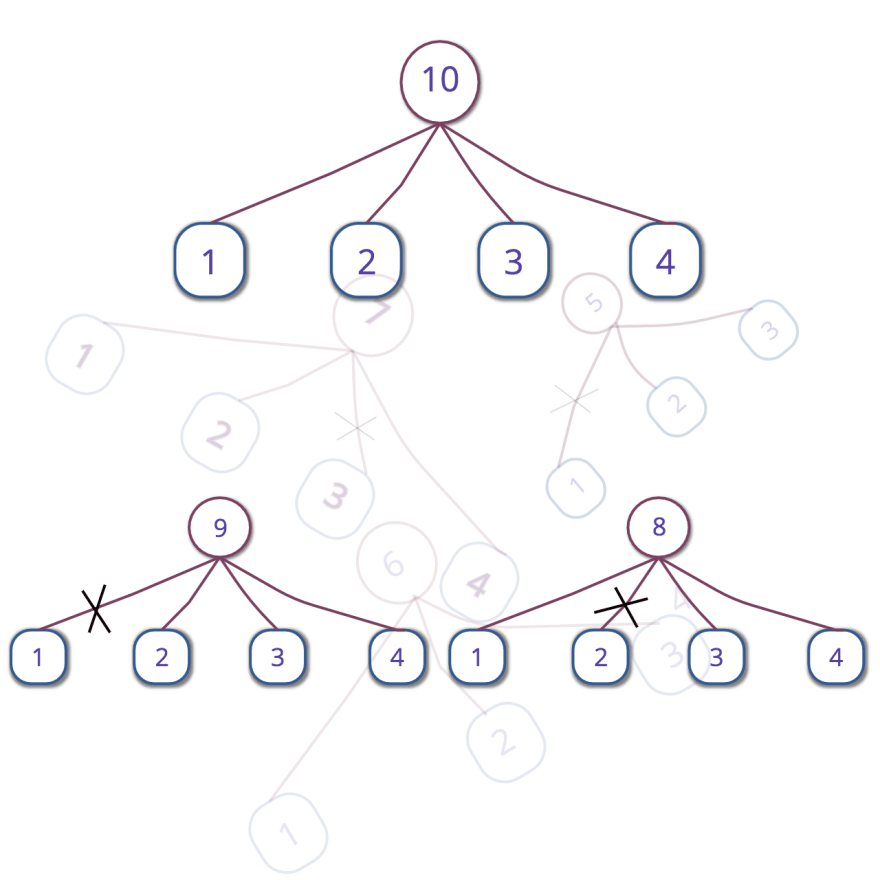 You’re organizing a hackathon and decide to give free cloud storage as prizes to the winners. For the prize fund, you’ve got 1024 GB of cloud space. You would be giving these gigabytes with the condition that a higher place in the hackathon gets a larger amount of space. Since you want to make as many participants happy as possible, you want to find the maximum number of places for which you’ll be awarding the prizes. That means, if you had just 8 GB available, you’d be having total 3 positions — the winner gets 5 GB, the runner-up gets 2 GB and the person who came third gets 1 GB (another variation is possible — 4, 3 and 1 GBs, but the number of positions is still 3 for 8 GB).

So how do you solve this? Note that (as demonstrated in the above example) there are multiple distributions possible for a given number of positions (let’s call this number p). Indeed, this boils down to representing a number in terms of the sum of distinct smaller numbers in such a way that there are as many of these numbers as possible. For 8 gigs, we could’ve chosen the form 8 = 7 + 1 or 8 = 5 + 3, but these wouldn’t have been optimum since 8 can be expressed as a sum of more than just a couple of numbers — as in 8 = 5 + 2 + 1. A mathematical concept which can add convenience to solving this problem is that of partitions — to quote Wikipedia, a partition of a positive integer n, also called an integer partition, is a way of writing n as a sum of positive integers. So in our case, we simply want to calculate the partition of 512 which has as many numbers as possible. Let’s call this a max partition for the sake of the conversation.

In computer science, this problem falls into a certain class of problems whose solutions use greedy algorithms — procedures that make the locally optimal choice at each stage of the solution with the hope of finding a global optimum.
The “greedy” approach to solving our example is as follows: doesn’t it seem natural to start with 1 as the first summand? All that remains then is to express 7 as a max partition and add 1 to it. But now expressing 7 as a max partition has a constraint — we cannot use 1. So we use 2 and move on to represent 8 - (1+2) = 5 as a max partition. Again, for that, we can’t use 1 and 2. Neither can we use 3 or 4 because then we’ll end up using 2 and 1 again, respectively. Thus, we represent 5 as just itself and we’re done — we now have our max partition as 8 = 1 + 2 + 5. It can be shown easily that this final condition arises when the number we originally wanted to pop out (here 3) is at least half the remaining number (here 5). I leave that part for you to figure out.

So, to put this strategy more formally — consider that we initially have two numbers n= 8 and l = 1. If n ≤ 2l, we simply represent n as itself, otherwise we pop out l and then solve the subproblem of representing n - l as a max partition such that each number in the partition is at least l+1. The value of l for this subproblem is 1 greater than that of the original problem. So for our example (n, l) of representing 8 as a max partition, we first pop out 1 and then solve the subproblem (n-l, l+1), i.e (7, 2). For this subproblem, we pop out 2 and then solve the subproblem (7-2, 2+1), that is (5, 3). Now, since 5 ≤ 2x3, we just pop out 5 and we’re done. We now just sum up the popped out numbers to get 8 = 1 + 2 + 5.
Since we’ve articulated the strategy more formally now, it’s easy to come up with a working program to solve our problem. Here’s a straightforward implementation in Python 3:

By the way, the last character of the above paragraph isn’t for a factorial 🙂. Let’s visualize the idea we’ve learned so far. Usually, Ferrers diagrams are used to visualize partitions, but for our purposes, I found my custom visualization more convenient: in the below tree, the top node is the number whose max partition we wish to evaluate. The leaves are the numbers in the max-partition representation, that, of course, sum up to give the number on the top node. For a senior number, everything’s good: 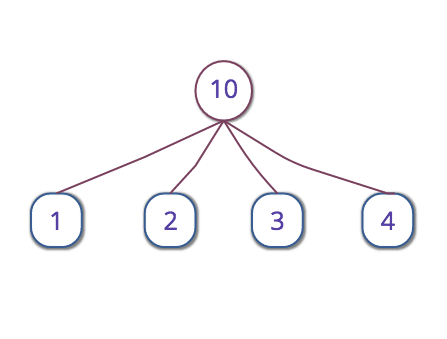 For a number that’s not senior, we cut the appropriate branch so that the number on the leaf which was connected to the top node via that branch isn’t added. Consider the case of 9: 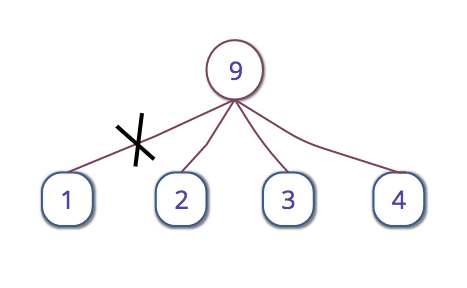 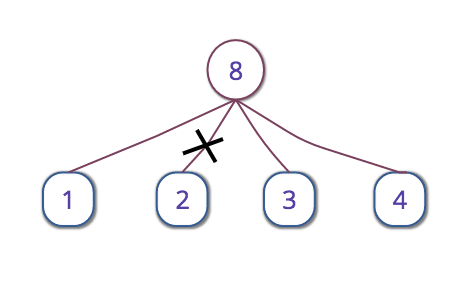 The max partition then is simply the sum of the remaining leaves. I hope you understand my algorithm by now.

One subtlety that’s remaining to be uncovered is the method to find out the “just large enough k”. But it’s a pretty straightforward calculation. The sum of first k natural numbers is n = k * (k+1) / 2. After solving this equation for a positive k, we get k = (√(1 + 8*n) – 1) / 2. Since k is going to be fractional if n wasn’t a senior number, we take the ceiling of it. That makes k large enough.

I think by now I’ve articulated this algorithm clearly. We can thus proceed to programming the solution. Here’s another straightforward implementation in Python 3:

If we do some analysis of both the algorithms, we discover that both of them run in linear time, that is O(n). However, the invisible constant hidden in O(n) is perhaps much less for optimal_summands() than for max_partition().

I did some simple checks in Python to see which method is quicker and the latter one turned out to execute more than thrice as fast as the former. I used Python’s timeit module to time both the algorithms, and here’s an instance of one of my checks on the Python interpreter:

I’ve often observed that knowing some mathematical facts allows one to develop a better algorithm, or at least develop an algorithm faster and with more intuition. Mathematical insights can often dramatically improve the runtime of one’s programs. Math and computer science — especially the study of algorithms, are great friends!

If you know about some other factors which make the latter program work faster, please let me know in the comments. At the end, perhaps greed isn’t always good, but math is. 😀