I got banned from the Wordpress forums (and for a fair reason, I broke the rules by mentioning ClassicPress in response to a review - and I also got a little bit ranty in a review I wrote of Gutenberg, sorry guys :s) and while I was chatting with the Wordpress forum team on their Slack channel about it I got the most definitive statement about Gutenberg that I've had to date: 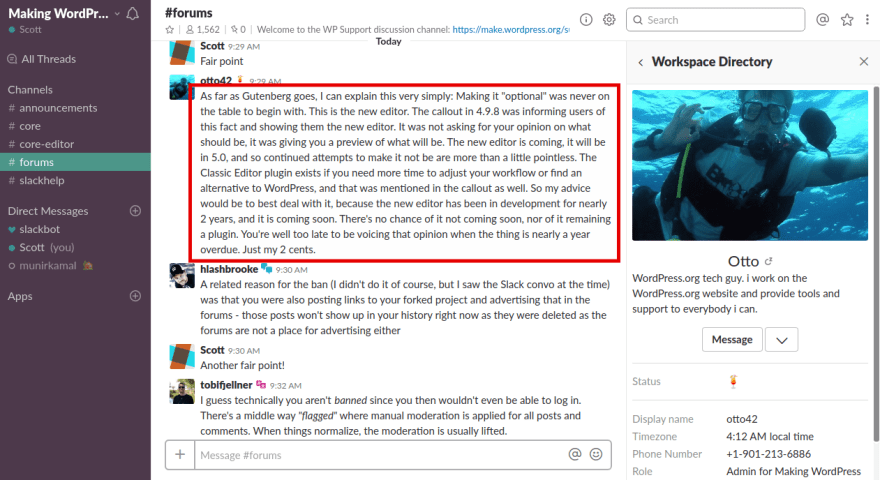 "As far as Gutenberg goes, I can explain this very simply: Making it "optional" was never on the table to begin with. This is the new editor. The callout in 4.9.8 was informing users of this fact and showing them the new editor. It was not asking for your opinion on what should be, it was giving you a preview of what will be. The new editor is coming, it will be in 5.0, and so continued attempts to make it not be are more than a little pointless. The Classic Editor plugin exists if you need more time to adjust your workflow or find an alternative to WordPress, and that was mentioned in the callout as well. So my advice would be to best deal with it, because the new editor has been in development for nearly 2 years, and it is coming soon. There's no chance of it not coming soon, nor of it remaining a plugin. You're well too late to be voicing that opinion when the thing is nearly a year overdue. Just my 2 cents."

So there you have it!

Once suspended, scottybo will not be able to comment or publish posts until their suspension is removed.

Once unsuspended, scottybo will be able to comment and publish posts again.

Once unpublished, all posts by scottybo will become hidden and only accessible to themselves.

If scottybo is not suspended, they can still re-publish their posts from their dashboard.