I'm a PC guy, I have always been. I played around a little bit with Linux back in the university days, but that was it.

But now, Windows brought Linux a little closer. I don't have to do anything complicated like dual booting or having another computer set up just to experience the Linux (non-GUI) environment.

As a Windows Insider, I tried the Windows Subsystem for Linux since day 1 and I really enjoyed it.

Now that Falls Creators Update is out, I'm using the Ubuntu distro from the store, and the first thing I want to do is having the Docker client installed.. It is not rocket science, but I did have some bumps on the road (because of my pretty low knowledge of Linux), so I thought I'd write what I've done to achieve that, in case it could be useful to somebody else.

There's something you need to understand first. The Docker Engine does not run on WSL, you HAVE to have Docker For Windows installed on your host machine. What we'll end up with at the end of this document is the Docker client running on Linux (WSL) sending commands to your Docker Engine daemon installed on Windows.

So, open you Ubuntu bash console, the first thing is to install the client. In order to do that, you have to use apt-get, which is Ubuntu's package manager (more info about apt here).

When that finishes, you'll end up having everything installed in Linux, but as I mentioned before, the Docker Engine does not run in WSL so if you write any command like docker images, you'll see a message like this one:

Cannot connect to the Docker daemon at unix:///var/run/docker.sock. Is the docker daemon running?

No, it is not running and it'll never be, at least for now.

You need to tell the Docker client where the Docker host is, and you can do that by using the -H option as follows:

If you don't want to type the host every time, you can set up and environment variable called DOCKER_HOST to localhost:2375

Now just running docker images will show the images in your host environment.
But, that environment variable will last only as long as the session does. You would have to set it every time you open bash. So, in order to avoid that, you set that variable in a file called .bash_profile in your home directory, like this:

Restart the bash console and the DOCKER_HOST variable should be there, just type

docker images to check everything is there.

I hope this post will help others, if it does, let me know.

EDIT: Make sure you expose the daemon on Windows, otherwise it won't work. 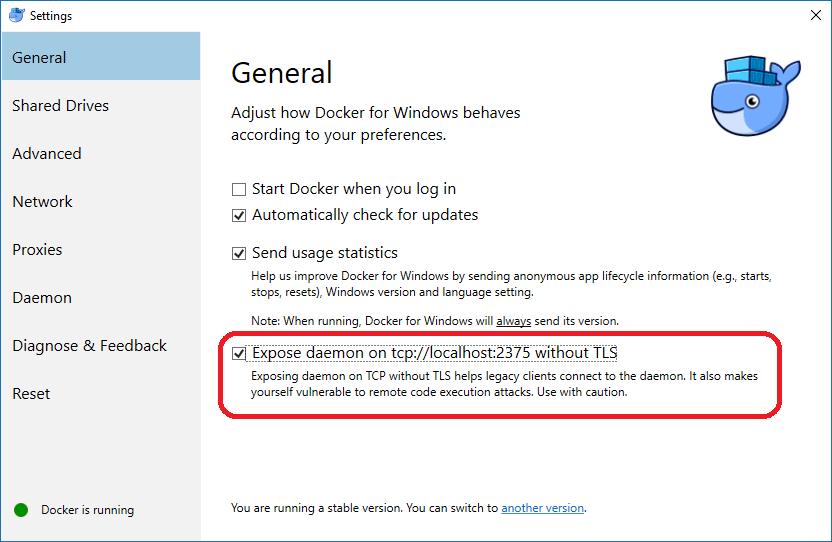 References: Get Docker CE for Ubuntu

Special thanks to Rich Turner for his kindness and patience.

EDIT: I recently learned there's an official, more complicated but secure way of achieving the same, so I thought I'd share it here: WSL Interoperability with Docker

How to setup an Ubuntu VPS server

Once suspended, sebagomez will not be able to comment or publish posts until their suspension is removed.

Once unsuspended, sebagomez will be able to comment and publish posts again.

Once unpublished, all posts by sebagomez will become hidden and only accessible to themselves.

If sebagomez is not suspended, they can still re-publish their posts from their dashboard.

Once unpublished, this post will become invisible to the public and only accessible to Sebastián Gómez.

Thanks for keeping DEV Community 👩‍💻👨‍💻 safe. Here is what you can do to flag sebagomez:

Unflagging sebagomez will restore default visibility to their posts.