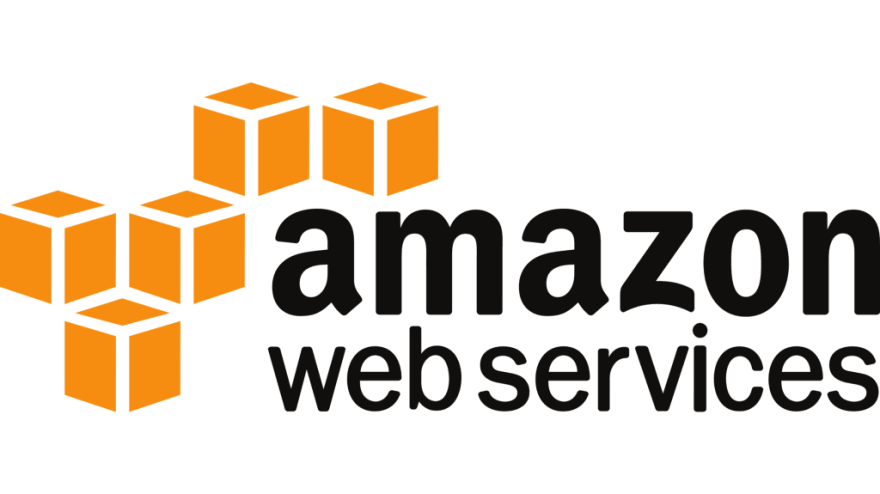 One of the shortcomings of the cloud-based architecture is the fact, that it can cost much more than when using own bare-metal servers. With this, cloud providers can have a confusing billing scheme, where you’ll pay for resources used, traffic, and so on.

So, in this post, we will try to understand — for what are paying when using Amazon Web Services, and in the following parts will check useful AWS services to control and optimize AWS environments with Cost Explorer, Trusted Advisor, Compute Optimizer, AWS Budget, etc.

All costs can be splitter into three main groups — Compute, Storage, and Data Transfer:

And I’d add another category for Data processing : this will include charges for HTTP(S) requests and data processing by an AWS service.

Knowing these categories, it will be easy to understand for what do you pay on AWS.

Also, we are charged additional costs for the:

Let’s collect main AWS services to a table to see for what we are paying for when using a Service: 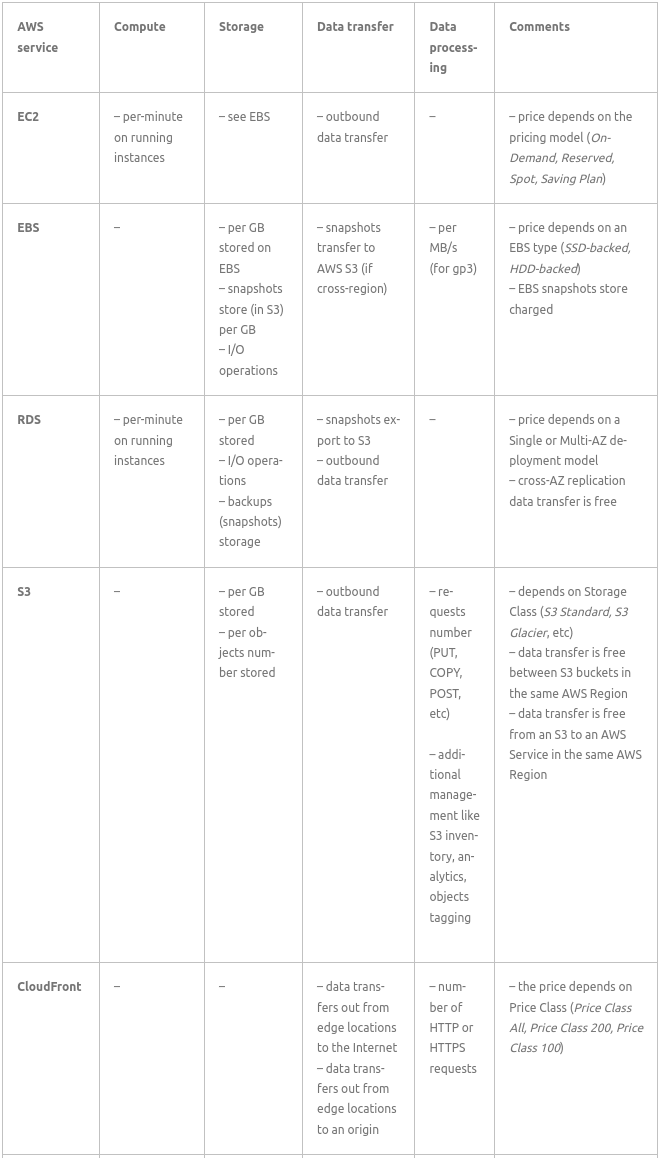 And let’s discuss the most interesting topic: for what are we paying when sending traffic on AWS?.

As a general rule, traffic on AWS can be divided into two parts — between Amazon Web Services and the Internet, and inside of the AWS network. Also, traffic price can be different depending on its direction — into the same or another Availability Zone, AWS VPC, or an AWS Region.

So, just keep in mind that:

AWS Data Transfers over the Internet

Inbound traffic from the Internet into AWS

Almost all incoming traffic from the Internet to the AWS Cloud is free of charge.

And vise versa — almost all outbound traffic will cost us some money.

Outbound traffic from the AWS Cloud to the Internet

Also, when AWS will charge you for the outgoing traffic, it will summarize outbound traffic from the following services in your account:

Data Transfer Costs inside of the AWS Cloud

Data transfer between AWS Regions will be charged by the price of the source region. In the same table on the Amazon EC2 On-Demand Pricing > Data Transfer page in the Data Transfer OUT From Amazon EC2 To you can see a price for each region.

Here, we are paying for the:

And again — the price will depend on the source and target region, see more at Amazon CloudFront Pricing.

AWS Data transfer inside on an AWS Region

When AWS services communicate in the bound of the same AWS Region, some traffic can be charged as well.

For example, we are sending 500 GB from a Redshift cluster in a VPC-1 to an EC2 instance in the same VPC, but neighboring Availability Zone — in that case, we will be charged $5 for the outgoing traffic from the VPC-1, and another $5 for the incoming traffic to the VPC-2.

If you have two EC2, each with its own Elastic IP attached — then we will be charged for the data transfer.

Here is simple enough: use only Private IPs inside of a VPC, do not pass the AZ-borders — and you’ll pay nothing.

Also, some cross-AZ traffic is free for services that use multi-AZ deployments, such as Amazon Aurora, Amazon Neptune, and Amazon RDS.

Also, traffic between Classic or Application Load Balancer and EC2 in the same AWS Region is free.

During a lot of googling while writing this post, I didn’t get something similar to a map with an illustrative demonstration on the AWS traffic charges. The only thing I’ve found is the Overview of Data Transfer Costs for Common Architectures on AWS Blogs.

So, on the scheme below I’ve tried to demonstrate which traffic will be billed on AWS: 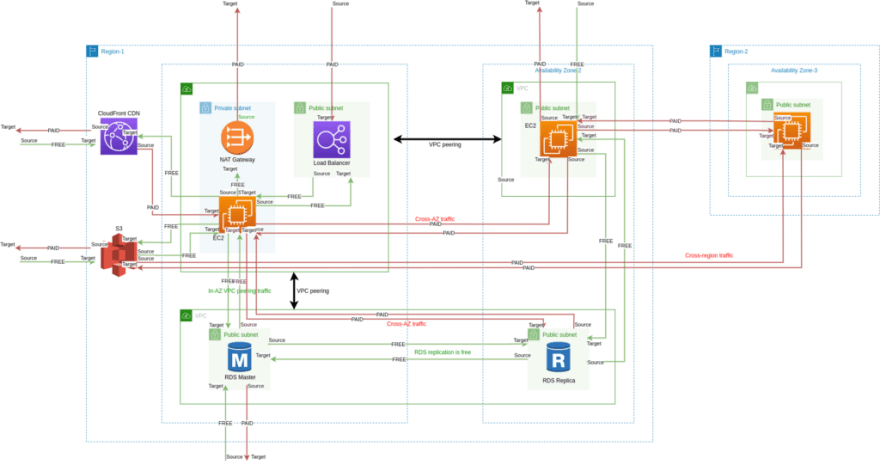 Let’s check it step-by-step starting from an “entry point” — the Load Balancer in the Region-1 and AZ-1.

What you should know about AWS Community Builder