During the SAML SSO configuration for our Jenkins, I faced an issue, when some attributes weren’t passed from Okta to the Jenkins instance.

So in this post will try to figure out what is SAML in general, will take a short overview of its architecture and main components, and will make some SAML-requests tracing/sniffing to see which data exactly is passed during authentication process using SAML SSO.

As there is a lot of technical information about SAML – we will take a closer look only at components that are used during Jenkins <=> Okta communication.

See the following posts about our Jenkins-Okta integration:

During this post writing mainly used the Security Assertion Markup Language (SAML) V2.0 Technical Overview from 25 March 2008, so here can be some inaccuracies but in general it looks correct (I hope so).

Other useful materials about SAML are:

As here is a lot of text and it was initially written in this blog in Russian – my apologies for the errors/misprints here. Please, fill free to comment about them as well as any mistakes in the processes described below.

The SAML SSO authentication includes at least two main parties – a Service Provider (SP), and an Identity Provider (IdP), and the process itself consists of the Trust Establishment process and actually an authentication process.

For example, in our case, the Jenkins instance will play the Service Provider role and Okta will be the Identity Provider.

Shortly, an authentication process has the next flow:

To pass data about a user SAML uses an Assertion object which includes all necessary information – a user username, its authentication status, groups, etc, depending on an Assert type.

Before going deeper let’s take a short overview of SAML use cases.

During the SAML authentication information exchange at least two sides included – a SAML asserting party and a SAML relying party.

When a SAML asserting party or SAML relying party performs a request – it becomes a SAML requester side, and the second side – a SAML responder side.

During the SAML authentication participants in the process operates by the SAML roles which describe SAML services, SAML protocols and asserts types to be used.

Another example can be the Attribute Authority role when one side generates an assert in the response of attributes request from another side – an Attribute Requester.

In most of the SAML asserts there is a subject that needs to be authenticated. Such a subject can be a user or, for example, a dedicated server.

Usually, an Assert contains information like “This is John Smith, he has a mailbox “john.smith@google.com” and he was authenticated with the Password Authentication mechanism“.

In its turn a Service Provider will decide itself which of this information it needs and depending on its own local access policies will grant or deny access to John.

Multi-domain Web Single Sign-on – one of the most used SAM Web SSO use cases.

In this case, a user has a login session (e.g. a security context) on some website, for example, airline.example.com. At some point in time directly or indirectly for a user he is redirected to a partner’s website, let’s say cars.example.co.uk, which is playing the Service provider role in this example. An IdP website (the airline.example.com in this case) creates an assert for this SP (cars.example.co.uk), affirming that this user is known, authenticated, and has a set of attributes.

Because the SP cars.example.co.uk trusts to its IdP airline.example.com – it creates a local authentication session for this user: 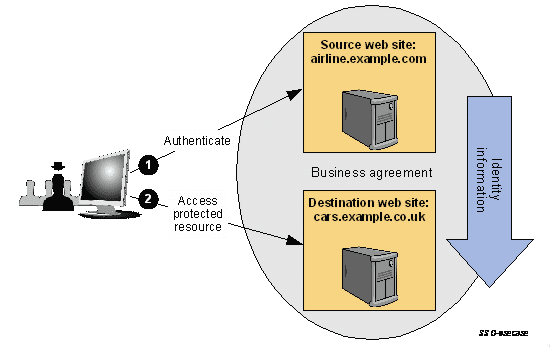 With this approach, a user is authenticated on the IdP first and after this can access a protected resource on an SP.

This way is known as an _ IdP-initiated Web SSO _.

A more widely use case is viсe versa – when a user first accessing a Service Provider resource which redirects this user to an IdP service to authenticate him.

After the user performs authentification steps on an IdP – this IdP will create an assert that will be used by the SP to check the user’s permissions on this SP.

The SAML “consists” from a bunch of building blocks which fitted together allows building various ways to work with SAML.

Those components are describing mechanisms to be used to pass an identity data, authentication information, and a user’s attributes.

The SAML assert contains data (the statements discussed above) about an authenticated object. An assert contains a subject of the assert (e.g. a user), conditions for this assert to be valid, and a set of statements.

Usually, asserts are created on an IdP side which received a request from an SP. To pass those requests SAML protocols are used which describes their structure and content for those messages in the SAML-defined protocol XML schema.

Ways to deliver those messages via low-level network protocols such as HTTP or SOAP are set in the SAML bindings.

Below we will take an overview of HTTP Redirect Binding, which is used during Jenkins <=> Okta authentication (see the SP-Initiated SSO: Redirect/POST Bindings part of this post).

And the last is the SAML profiles which are defines SAML use cases, for example, the Web Browser SSO profile.

A Profile describes the content of SAML asserts, protocols, and bindings to be used together to solve specific business needs.

There are also Attribute Profiles, which not relates to messages protocols or bindings, but describes how to exchange information about attributes by using asserts.

In some cases, a Service Provider may require more detailed information about the authentification type used on an IdP side.

In this case, a SAML Authentication Context is used which is added to the authentication statement of an assert passed between them.

All together can be displayed with the next scheme: 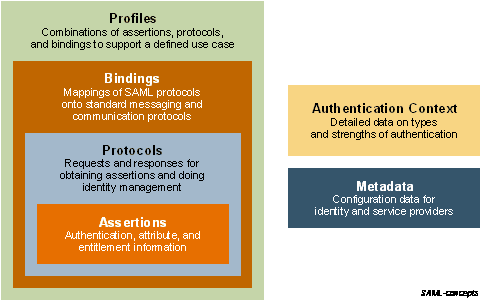 SAML asserts includes one or more statements, and are passed via a network with HTTP, SOAP or other data transfer protocols:

To make a SAML-request tracing and parsing let’s use a Chrome’s saml-chrome-panel extension.

Install it, open Chrome Developer Tools, open Jenkins tab, log in and let’s investigate what data is transferred between our Jenkins and Okta.

The Assertion, Subject, and Statement Structure

Let’s take a closer look at an Assert, Subject and its statements:

In this XML fragment we can see an assert example with one authentication statement:

The next part is the <AttributeStatement>:

In addition to the information about authentication discussed above, an IdP can pass attributes about an authenticated object.

As already mentioned SAML defines a bunch of different profiles for different use cases.

In our case with Jenkins and Okta the Web Browser SSO Profile is used which is the most widely used SAML authentification type used.

We already discussed IdP-initiated and SP-initiated roles above, and in our case, it will be the SP-initialized (a user opens Jenkins URL, which requests this user authentication from an IdP).

The back-way authentication initialization will work too, when a user first opens its Okta account, then clicks on a Jenkins icon in there – then Okta will play an initializator role and will generate an assert which will be passed to the Jenkins instance.

The second thing defined by the profile are bindings used to pass data between an IdP and an SP.

In doing so, in the same authentication session, an Authentication Request can be sent by using one binding type, and a Response message by using another one, which is described by an IdP and SP configuration.

And finally, let’s speak in details about the whole SSO authentification process between the Jenkins and Okta by using the SP-Initiated SSO: Redirect/POST Bindings , which can be easy to identify by the HTTP methods from the saml-chrome-panel output: 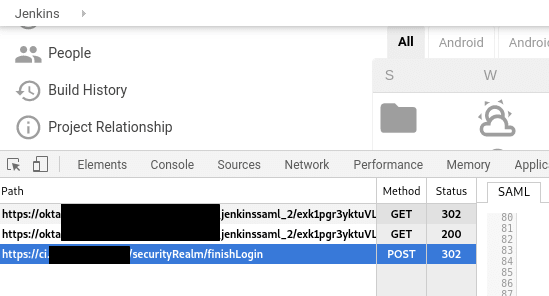 Schematically this process can be displayed as the next:

Well, that’s all in general.

AWS Incident Response: How To Contain An EC2 Instance?