When I first began to use the React framework, the go-to guide that is ubiquitous is a tool called create-react-app, it helps you set up a react project with just one command isn't that great?😃 It's great I know, but as a software dev, sometimes there's that feeling that probes you to want to learn why some things work the way they should and what actually happens behind the scenes, that was how I got to know about parcel-js.

Parcel is a bundler that is used in building apps, it requires zero-configuration unlike the other app bundlers out there, like webpack which gives you the freedom to do as you wish with your configurations, but sometimes what we need is a simple tool that helps us get started with running our apps as fast and soon as possible, and since it is a tool with no-configs at all, all that is required of you is to point at the entry point of your application.

Parcel has some nice features, which actually depicts why you should use it, which includes but not limited to;

Okay, enough talk, let's see how we can actually use parcel.

To begin, create a new directory on your machine by running the command below.

Then you'd have to install parcel in your project directory, using the command below

Since our main(entry point) file as index.js we'd have to link it in our HTML file, now we'd go ahead to create a src directory and inside we'd add index.html and index.js files there.

The packages that we've installed above would allow us to write react, and since React is written in ES6 (EcmaScript 6), we'd have to look for a way to transpile our code to what the browser understands, all we have to do is to install the presets

the flag --save-dev enables us to add these presets as dev dependencies in our project.

once we're done installing the presets, let's create a .babelrc file which would contain the following;

Now let's edit the content of the index.js file we created before.

Now let's style our component, we'd be using scss which to our advantage, parcel has a support for scss, to use files with the .scss extension let's install the node-sass package;

Once we've had node-sass installed we can import scss files from our components, let's create a scss directory and then create app.scss in it.

Now let's edit the content of index.js by adding snippet below.

Wow! if you got to this point, I appreciate you 🙌 Now that we've got to this point in setting up our application, running it would require us to configure our package.json file by adding the code below.

The --open flag enables your script to open the app in your browser.

The snippet above shows that whenever we run npm start command, we are communicating with parcel to start a dev server using the index.html as an entry point, when you run the command you'd be able to view the App at http://localhost:1234 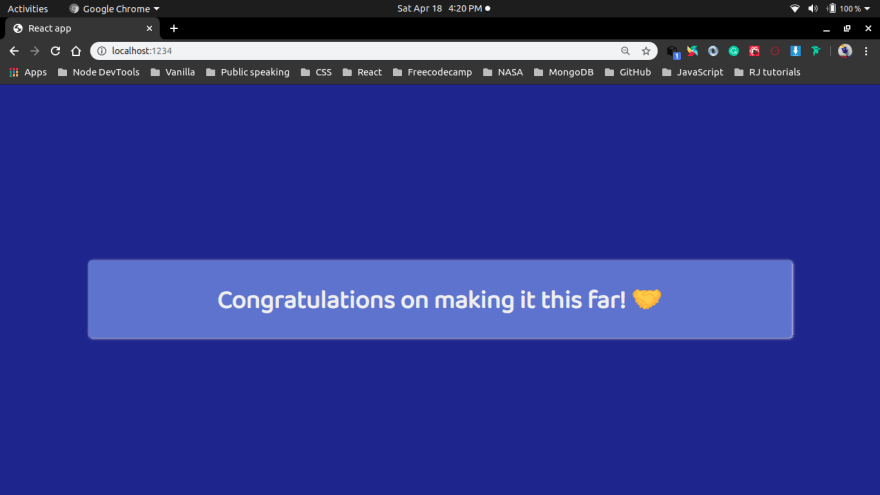 When we want to build the app for production we'd have to run parcel build index.html command, so we'll then add that to the scripts object in our package.json file.

We also have some other options which we can choose on how our app is prepared for production.

Normally dist is the default directory in which the production files are kept, but you can specify another directory of your choice, by adding --out-dir directory-name at the end of the build property in package.json

Thanks for reading this article, I hope you've fully understood how to use parcel to make a react project, if you don't get it right now, you'd have to keep using parcel till when you're super comfortable with it.

Count Common Words With One Occurrence

How to start your career in Data Analysis?

Caleb O.
Building on, and for the JAMStack and writing about my progress. Exploring the Web3 ecosystem.
I reduced an npm package size by 50% with minification
#javascript #webperf #opensource #react
How to implement protected routes in Next.js
#nextjs #javascript #react #webdev
Break into web3 by joining this hackathon
#web3 #javascript #beginners #programming

Once suspended, seven will not be able to comment or publish posts until their suspension is removed.

Once unsuspended, seven will be able to comment and publish posts again.

Once unpublished, all posts by seven will become hidden and only accessible to themselves.

If seven is not suspended, they can still re-publish their posts from their dashboard.

Once unpublished, this post will become invisible to the public and only accessible to Caleb O..

Thanks for keeping DEV Community 👩‍💻👨‍💻 safe. Here is what you can do to flag seven:

Unflagging seven will restore default visibility to their posts.