This article explores the topic of "binary" and "text" files. What is the difference between the two (if any)? Is there a clear definition for what constitutes a "binary" or a "text" file?

We start our journey with two candidate files whose content we would intuitively categorize as "text" and "binary" data, respectively:

We have created two files: A file named message with the textual content "hello 🌍" (including the Unicode symbol "Earth Globe Europe-Africa") and a PNG image with a single white pixel called white. File extensions are deliberately left out.

To demonstrate that some programs distinguish between "text" and "binary" files, check out how grep changes its behavior:

diff does something similar:

How do these programs distinguish between "text" and "binary" files?

Before we answer this question, let us first try to come up with a definition. Clearly, on a fundamental file-system level, every file is just a collection of bytes and could therefore be viewed as binary data. On the other hand, a distinction between "text" and "non-text" (hereafter: "binary") data seems helpful for programs like grep or diff, if only not to mess up the output of your terminal emulator.

So maybe we can start by defining "text" data. It seems reasonable to begin with an abstract notion of text as being a sequence of Unicode code points. Examples of code points are characters like k, ä or א, as well as special symbols like %, ☢ or 🙈. To store a given text as a sequence of bytes, we need to choose an encoding. If we want to be able to represent the whole Unicode range, we typically choose UTF-8, sometimes UTF-16 or UTF-32. Historically, encodings which support just a part of todays Unicode are also important. The most prominent ones are US-ASCII and Latin1 (ISO 8859-1), but there are many more. And all of these look different on a byte level.

Given just the contents of a file (not the history on how it was created), we can therefore try the following definition:

A file is called "text file" if its content consists of an encoded sequence of Unicode code points.

There are two practical problems with this definition. First, we would need a list of all possible encodings. Second, in order to test if the contents of a file is encoded in a given encoding, we would have to decode the whole contents of the file and see if it succeeds¹. The whole process would be really slow.

It turns out that there is a much faster way to distinguish between text and binary files, but it comes at the cost of precision.

To see how this works, let's go back to our two candidate files and explore their byte level content. I am using hexyl as a hex viewer, but you can also use hexdump -C: 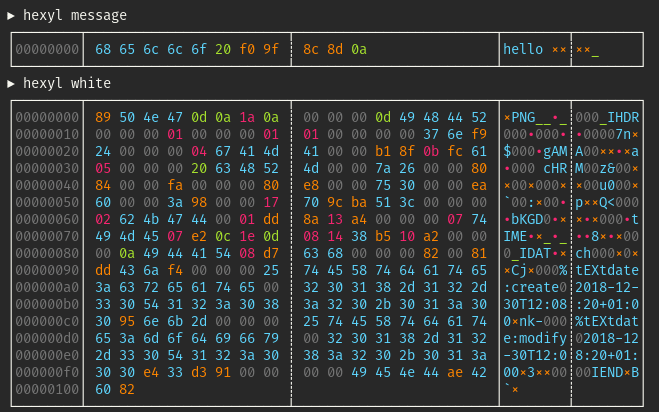 Note that both files contain bytes within and outside of the ASCII range (00…7f). The four bytes f0 9f 8c 8d in the message file, for example, are the UTF-8 encoded version of the Unicode code point U+1F30D (🌍). On the other hand, the bytes 50 4e 47 at the beginning of the white image are a simple ASCII-encoded version of the characters PNG².

So clearly, looking at bytes outside the ASCII range can not be used as a method to detect "binary" files. However, there is a difference between the two files. The image file contains a lot of NULL bytes (00) while the short text message does not. It turns out that this can be turned into a simple heuristic method to detect binary files, since a lot of encoded text data does not contain any NULL bytes (even though it might be legal).

In fact, this is exactly what diff and grep use to detect "binary" files. The following macro is included in diffs source code (src/io.c):

Here, the memchr(const void *s, int c, size_t n) function is used to search the initial size bytes of the memory region starting at buf for the character 0. To speed this process up even more, typically only the first few bytes of the file are read into the buffer buf (e.g. 1024 bytes). To summarize, grep and diff use the following heuristic approach:

A file is very likely to be a "text file" if the first 1024 bytes of its content do not contain any NULL bytes.

Note that there are counterexamples where this fails. For example, even if unlikely, UTF-8-encoded text can legally contain NULL bytes. Conversely, some particular binary formats (like binary PGM) do not contain NULL bytes. This method will also typically classify UTF-16 and UTF-32 encoded text as "binary", as they encode common Latin-1 code points with NULL bytes:

Nevertheless, this heuristic approach is very useful. I have written a small library in Rust which uses a slightly refined version of this method to quickly determine whether a given file contains "binary" or "text" data. It is used in my program bat to prevent "binary" files from being dumped to the terminal: 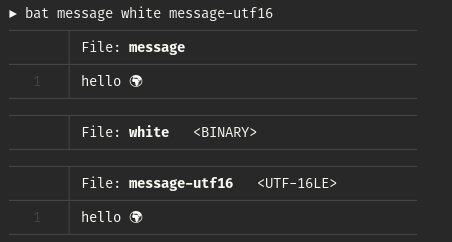 ¹ Note that there are some encodings that write so-called byte order marks (BOM) at the beginning of a file to indicate the type of encoding. For example, the little-endian variant of UTF-32 uses ff fe 00 00. These BOMs would help with the second point because we would not need to decode the whole content of the file. Unfortunately, adding BOMs is optional and a lot of encodings do not specify one.

Guide to writing, compiling, and running MIPS binaries on Linux

What the #! shebang really does

David Peter
What was your win this week?
#discuss #weeklyretro
15,000 GH stars in a year: how we did it 🤩
#opensource #career #devjournal #programming
The perfect open-sourcer does not exist
#opensource #beginners #github #productivity

Once suspended, sharkdp will not be able to comment or publish posts until their suspension is removed.

Once unsuspended, sharkdp will be able to comment and publish posts again.

Once unpublished, all posts by sharkdp will become hidden and only accessible to themselves.

If sharkdp is not suspended, they can still re-publish their posts from their dashboard.

Once unpublished, this post will become invisible to the public and only accessible to David Peter.

Thanks for keeping DEV Community 👩‍💻👨‍💻 safe. Here is what you can do to flag sharkdp:

Unflagging sharkdp will restore default visibility to their posts.