As well as a dev, I’m a fiction writer, and sometimes I run out of ideas for what to write. A couple of weeks ago this gave me an idea for what to code—a writing prompt generator! 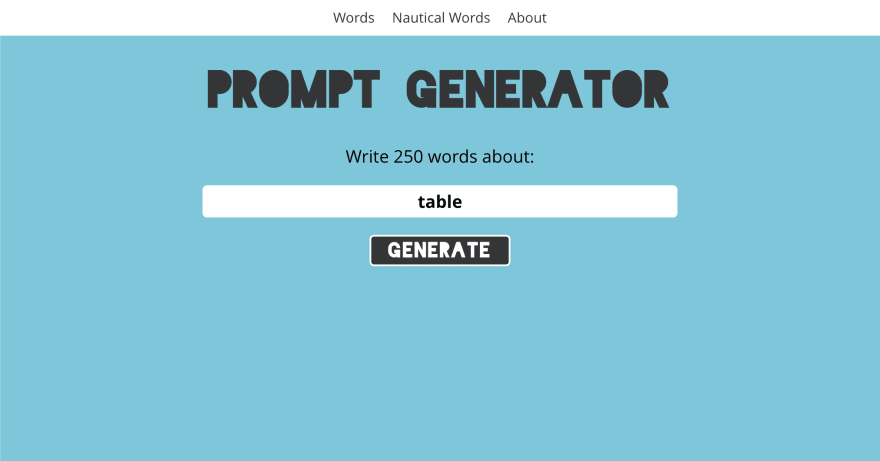 There are a lot of these out there, of course, but making one myself was fun, and as my previous React app was made with mostly class components, for this project I took the opportunity to get more familiar with function components in React along the way.

This post will walk through how I set this up! It assumes some familiarity with React as a library.

The first thing I wanted to accomplish with this generator was allowing the user to generate prompts from multiple sets of words, with different pages for each set of prompts. To this aim, I created two prompt page components and one generator component that could be rendered with a different set of props in each of them.

Here the WordsPromptPage component is rendering a Generator component with a dataset of words, which is an array in a separate file. I could have made a database for different types of prompts, but I decided to keep them in asset files on the frontend instead to be able to host the generator more simply as a frontend on Netlify instead of hosting a backend and frontend separately.

To switch between different generator pages (and my about page) in the app, I used react-router-dom in the main App component so that when the URL changes, the component shown changes too.

In the NavBar component, I put the links to these different routes:

According to the React documentation, hooks are “functions that let you 'hook into' React state and lifecycle features from function components… they let you use React without classes.”

For my generator component, I used useState to return a prompt variable and also a setPrompt function to let me update the prompt.

The initial state here was set to the string, “Click to generate a prompt!”, and on button click, prompt is set to the return value of the generate() function.

After getting this set up though, I realized it would be a better idea to have the site load with a random prompt generated as well, and I could probably use useState to do this too.

As long as the generate() method was declared before useState was set up (because JavaScript doesn’t hoist function expressions), I could set the initial state for prompt to the return value of generate() as well, so that the app would have a newly generate prompt on loading and on refresh.

I had a lot of fun building this app, and it was a good way to spend a few days familiarizing myself with function components, as well as spending more time with React after a break away from it! I look forward to diving deeper into functional React in the future—and expanding the types of writing prompts in the generator!

How to Build an Exciting Blockchain Voting System with React, Solidity, and CometChat

Build a Job Board with Next Using Xata and Cloudinary

Once suspended, sharkham will not be able to comment or publish posts until their suspension is removed.

Once unsuspended, sharkham will be able to comment and publish posts again.

Once unpublished, all posts by sharkham will become hidden and only accessible to themselves.

If sharkham is not suspended, they can still re-publish their posts from their dashboard.

Once unpublished, this post will become invisible to the public and only accessible to Sam Markham.

Thanks for keeping DEV Community 👩‍💻👨‍💻 safe. Here is what you can do to flag sharkham:

Unflagging sharkham will restore default visibility to their posts.