I published a post recently about returning promises from JavaScript functions. The example code was simplified from a side project I'm working on. That project's main goal is to help me learn more TypeScript. But I'm also experimenting with using WordPress and React as a static site generator. In that project, I'm experimenting with different ways to abstract data fetching from server and client rendering as well as saving data to static files. 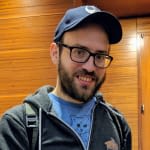 Returning A Promise From A JavaScript Function Is Useful

In this post, I'm going to show some examples from that project that show the utility of returning promise options from JavaScript functions and how much more useful it is with TypeScript.

Here is a JavaScript function from my last post about promises:

This returns an array of posts. That's cool, but the IDE and the babel compiler don't know that. I, as someone using this function in another file, may not know what it returns. TypeScript helps make it really explicit what that type of promise is being returned.

That example was simplified from this function in my project:

This one is a little more complete. It uses arguments for page and post type, as well as the URL for the API. In my actual code, I added a line with //@ts-ignore inside the closure as Jest was raising a TypeScript error that the URL was not absolute, even though the string literal does create a valid, absolute URL. Please comment if you know a better solution, I'm at 🤷.

The key part of this is the return type Promise<Array<WpApiPost>>. This type has three parts. The first part Promise tells us the at the function returns a promise, which TypeScript's compiler would have figured out on it's own. The second part tells us that this promise resolves an array. The third part shows us this array is a collection of objects of the WpApiPost.

Why This Is Useful

Now I can think of this function, when I'm consuming it as a black-box. I know what goes in and what comes out and I don't care what is inside... as long as its tests pass.

Consuming this function is now a lot simpler. In strict mode, I have to tell the callback for this promise what to expect. For example, in a React component:

This shows how to add TypeScript typings to React.setState(). We do a similar typing with array.map, when iterating over this array with React, when rendering:

I Promise This Is Super Useful

In this post, I rewrote one of the examples from my last dev.to post but showed how returning a promise from a function is even more useful with TypeScript. No surprise, TypeScript is great.

Encapsulating API fetch logic inside of a function is helpful, but it can make it harder to work with the results. Using TypeScript makes it clear what the resulting data will be, and how to use it, when the promise is resolved.

Once suspended, shelob9 will not be able to comment or publish posts until their suspension is removed.

Once unsuspended, shelob9 will be able to comment and publish posts again.

Once unpublished, all posts by shelob9 will become hidden and only accessible to themselves.

If shelob9 is not suspended, they can still re-publish their posts from their dashboard.

Once unpublished, this post will become invisible to the public and only accessible to Josh Pollock.

Thanks for keeping DEV Community safe. Here is what you can do to flag shelob9:

Unflagging shelob9 will restore default visibility to their posts.