repository on github
That’s the code for the starter repository.
Also made this repository a template repository

This post details why, how to prevent errors and how to do it yourself. It is useful if you want to set up a monorepo for an existing codebase, or if you run into errors when extending your monorepo.

With this update, the template contains:

If you've been using ReactJS in more than one project or are building multiple Apps, you've probably come across lerna already. Since setting up webpack can be tricky, the choice is usually to use create-React-app as long as possible. So we're going to look at how this works with a centralised TypeScript config that we'll also use for our ui component library, which we'll put in a separate repository. We’ll use yarn since we’ll make use of yarn workspaces as well.

First of all, you’ll need to install lerna, and while you can do that globally, I recommend installing it in your monorepo unless you (and the contributors to your monorepo) want to author lots of monorepos with lerna and it’s part of your standard toolset.

Now we have lerna, which gives us organization tools for monorepos. For example initialization:

This will create a lerna.json file and a packages folder. Since we’ll use yarn workspaces, we need to define yarn as our npmClient and set useWorkspaces to true. Our lerna.json will end up looking like this:

And that is all the configuration we need for lerna.

Since we’re using yarn workspaces, we need to modify our package.json, by adding:

Note: your packages-folder doesn’t need to have that name. You could also have your ui-lib, apps and server code in different subfolders. For using workspaces and lerna together, you should however define them in both lerna.json and package.json.

Initializing sub-packages in monorepos is pretty similar to normal repos, with one thing to note when setting the name. You just change into the directory:

And initialize a package:

But with the name @my-org/my-monorepo-ui-lib. This is using a feature called npm organization scope and requires you to set up an organization with npmjs.com if you want to publish as the @my-org organization.

This is not mandatory, but it shows a source for bugs when we’re developing monorepos:

We want to build reusable react components in our UI library, but later our create-react-app package will determine which version of react we will use. That’s why react and react-dom can only be a peerDependency in the UI library. Storybook is our way to quickly try out our react components, so we’ll add that as a devDependency:

This is how we’ve always been doing it, right? Turns out, now there’s a node_modules folder in our ui-lib package, with react, react-dom and @storybook inside. But we wanted to have our packages at the root, so lerna will help us do that from the root package:

Now there’s a node_modules folder at the root, containing react, react-dom and @storybook. The node_modules folder inside our ui-lib package is still there, it contains a .bin-folder with storybook’s command line (bash/cmd) scripts for starting and building. All tools executing command line scripts such as storybook, tsc and create-react-app are not necessarily aware that they’re run in a monorepo, they execute commands on the operating system and are usually built for “normal” npm repos.

Inside ui-lib, if we try to run

it will execute the script but tell us that we have no storybook configuration file yet:

We get the same error if we add it as a script in ui-lib’s package.json (naturally):

Let’s fix that error by creating the file packages/my-monorepo-ui-lib/.storybook/config.js

and packages/my-monorepo-ui-lib/src folder, that can be empty for now. Inside our ui-lib, running

The difference becomes clear once we go to the root and try to run command line scripts from there:

and we have the same error as before. The reason is that the node_modules-folder at the root also contains the command line script, and tries to look for a storybook config relative to the root package. Lerna will help us here as well, at the root we can call

That command will run ‘story’ relative to all packages in parallel, and ‘stream’ the script output to the console. This only works for so-called ‘lifecycle scripts’, i.e. scripts defined in one of the sub-packages' package.json, so the following command will not work:

but it’s generally better to choose a different name to avoid confusion, especially because a lot of people install tsc and other tools globally.

Take caution when using CRA for new packages in combination with yarn workspaces:

This will throw an error, since CRA copies files out of the node_modules folder where it’s installed in (here: packages/my-monorepo-cra-app/node_modules), while yarn workspaces make sure everything gets installed in the root-node_modules-folder. So in the root package.json delete

and add it back in after you’ve run CRA. Then in the root folder run

and your dependencies will neatly be moved to the root-node_modules. Running

will start your CRA-App, the JavasScript version of it.

Monorepos can help centralize configuration, so we’ll create a general tsconfig.json at the root of our monorepo. It would be great if we could use that in every subproject, but CRA needs to make some assumptions about its TypeScript setup, so it adds/overwrites the values inside tsconfig. That’s also good news, since it doesn’t just overwrite the file - and we can extend from another tsconfig. In our library project on the other hand we are more free, we can change the webpack there if we have to.

How to structure your typescript-configurations

This decision depends on how many packages and what types of typescript-packages you want in your monorepo:

Apart from typescript, create-react-app supports css, scss and json-imports out of the box with just a little bit of configuration. We’ll add a typings.d.ts-file at the root for those types, so those file types are importable by default:

This is the minimal tsconfig.json we could work with:

We want to use typescript in all our packages, which is done by the lerna add command:

We include skipLibCheck as well, because we want tsc to run fast.

UI-library with storybook and typescript

When structuring our UI library, it’s good to follow a consistent pattern. The goal is to just run ‘tsc’ and have working Javascript, no webpack needed if we can avoid it by clear structure.

So your folder structure may end up looking like this: 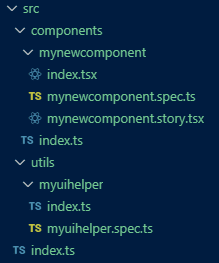 Any file named index.ts is either a leaf in the file tree and exports unit-tested code or is a branch and exports its subfolders. Unit-tests and stories are not exported and their files can be excluded from the compiled code via configuration. Here’s an example of what the files may look like:

However, we do need webpack for one thing: Storybook’s configuration for typescript. And since we’re at it, we can add support for scss and some file types as well.

Bootstrapping is not needed because we’re using yarn workspaces, and our packages can be found at the root’s node_modules folder.

Directly adding it inside the package is a workaround for an error in lerna add in combination with organization scopes:

lerna WARN No packages found where @babel/core can be added

The cleaner option would be to use lerna add with the --scope parameter, however this has been incompatible with how we set the organisation scope. The command would be:

Are you wondering, what the --scope-parameter is all about?
Here, --scope is the installation scope parameter, @my-org the npmjs-organization scope. So all those packages will be added to our UI library package.

And we could use a minimal tsconfig.json that just extends from our root tsconfig.json, and puts the output in the lib-folder:

This allows us to compile typescript-files and run storybook, but we want to do more! (to do less later on...)

For our library project, we need to emit declaration files (the files ending in *.d.ts). Otherwise we’ll receive errors such as:

For clarification: Webpack isn’t used in our build-process, tsc is. The Webpack we’re configuring is used by storybook.

The limits of centralizing our typescript configuration is determined by create-react-app’s use of typescript. At the time of writing this article, switching a CRA App from Javascript to Typescript is done by changing the index.js file to index.tsx and adding all the needed dependencies. Check CRA’s documentation for changes: https://create-react-app.dev/docs/adding-typescript

Inside our CRA-package, we run

then we copy our minimal tsconfig.json from the ui-lib over to the CRA App package. If we run

Now, CRA’s compilerOptions will be added to our tsconfig.json.

Now it’s time to load our UI library into our CRA App, it will be installed by running:

But as you might have noticed, we haven’t done much build setup for the library yet. Why didn’t we do that earlier? The reason is pretty simple: CRA, lerna and Storybook are evolving, and so is typescript, npm and even Javascript. And with ES6 modules, we have a powerful new feature built into the language, replacing earlier module management solutions. The only problem is that it’s not 100% adopted, but as we want to be a good library provider, we offer a fallback. So let’s export our library to ES6 modules - and an “older” module management system. Otherwise we’ll run into errors such as:

If you want to deep-dive into that topic, this blog about nodejs modules and npm is a good start.

Npm as our package management solution has also been around since before ES6 and typescript’s rise, so we can set different entry points for our library project inside package.json:

Our project is written in typescript from the start, so we’re bundling the declarations with our package. If you’ve seen yourself importing @types-packages, this is because those projects are written in Javascript at the core, and type definitions have been added later on.

So we set a tsconfig.esm.json up to export as an ES6 module:

This does the following:

This way, our library has one export for the latest Javascript features and one that is downwards compatible, so our library can have a bigger range of consumers. Note that for our own final App, CRA uses babel under the hood for compatibility in different browsers.

We’re already emitting our declarations in the lib-folder, so we won’t emit them another time here.

Finally, we’ll add a library-build-script in our library package.json:

And we’re ready to add our library package to our CRA package. We can set a wildcard for the package version so that it’s always going to be the latest version.

In our CRA App we can now add the component from the library, fully type-checked: 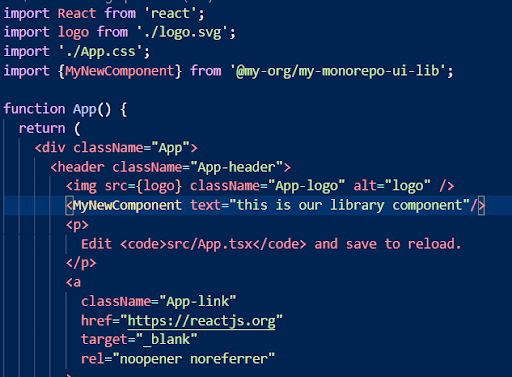 And because monorepos should make our lifes easier, we’ll add scripts in our root-package.json to start storybook, and execute the library build before starting our CRA app:

This will hopefully prevent the most common errors you can run into with this monorepo-setup. If you have additional tips, feel free to add them in the comments!

Using Custom Controllers in Strapi to Power a Next.js App