Yeah, I know, I know; you can use Bash on Ubuntu on Windows via WSL, but this article is specially for users using Windows 8.1 and below (and also for enterprise/LTSB Users) 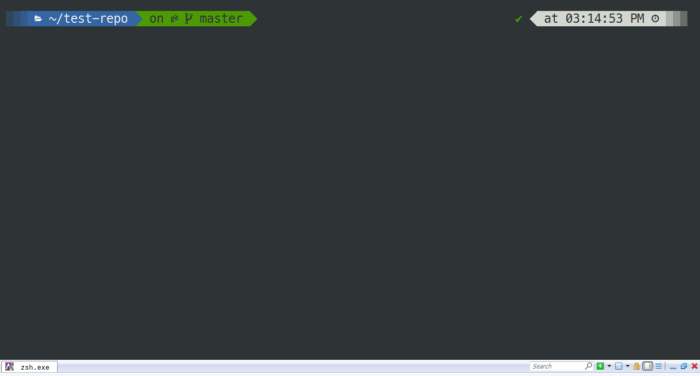 First things first, make sure you have:

First of all, head over to this website to download and install Cmder, a console emulator. You can install the Mini version. No problems.

Open Cmder, you must see this screen: 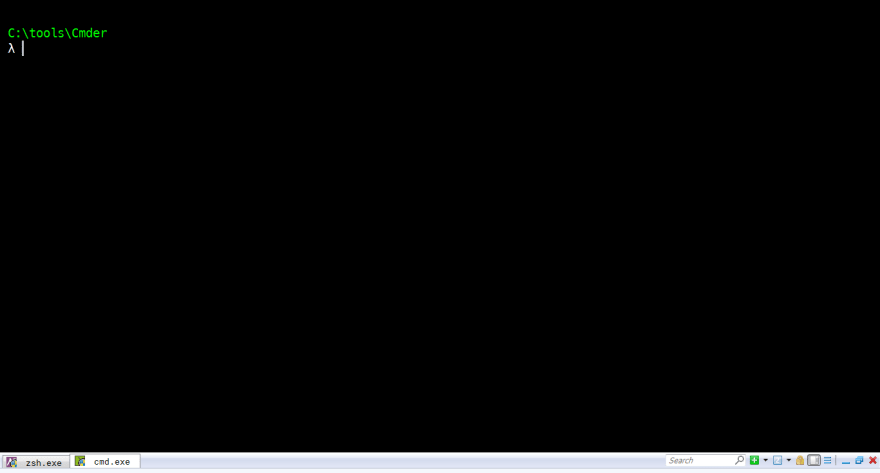 This may look different, but the overall interface must be the same.

Let’s customize it, as it looks pitch black!

Click on the four files one by one; after it downloads, select the four .ttf files, then right click, then Install. You may need to provide the Administrator password for that.

After you install the MesloLGS NF font, head over to General → Fonts in the left pane of Cmder Settings, and change the main console font and alternative font to MesloLGS NF. Change the font size to something larger, as the prompt looks like: What is this? A prompt for ants? :) Ok, jokes apart. Your settings should look something like this: 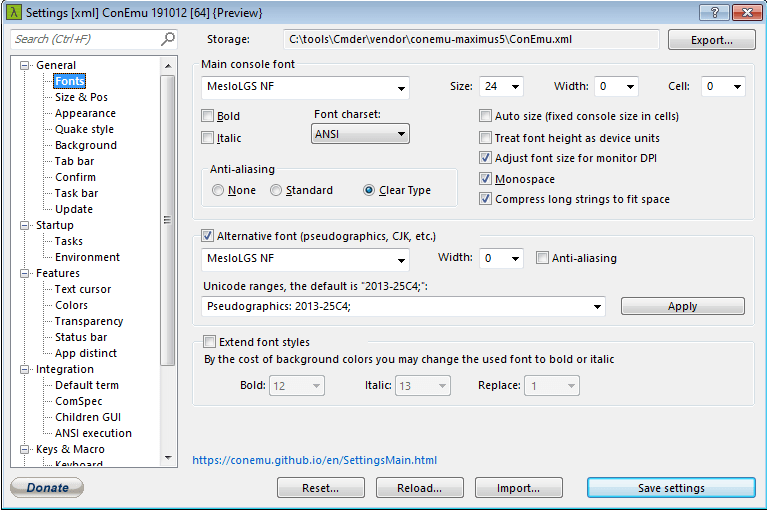 Optional: Head over to the Features → Colors tab and change the Schemes option to <Ubuntu>. You can select whatever you like. If you didn’t like any of these, then head over to this page and follow the instructions to install a theme you like. And wherever it says, ConfigPath, it means the path written near the Storage section above all the settings. Mine is C:\tools\Cmder\vendor\conemu-maximus5\ConEmu.xml. I personally prefer <Ubuntu>, provided with Cmder already.

After you do that, let’s install MSYS2. 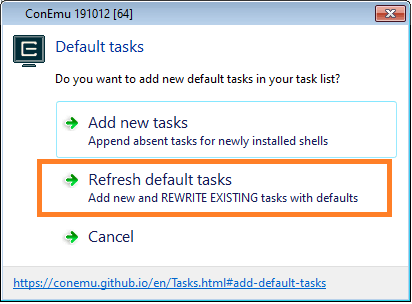 After you do that, you will see some tasks in the Predefined tasks panel. Click on the {Bash::Msys2–64} task and click Clone at the bottom. Then, click on the newly cloned task and at the white input box at the right, paste the following: 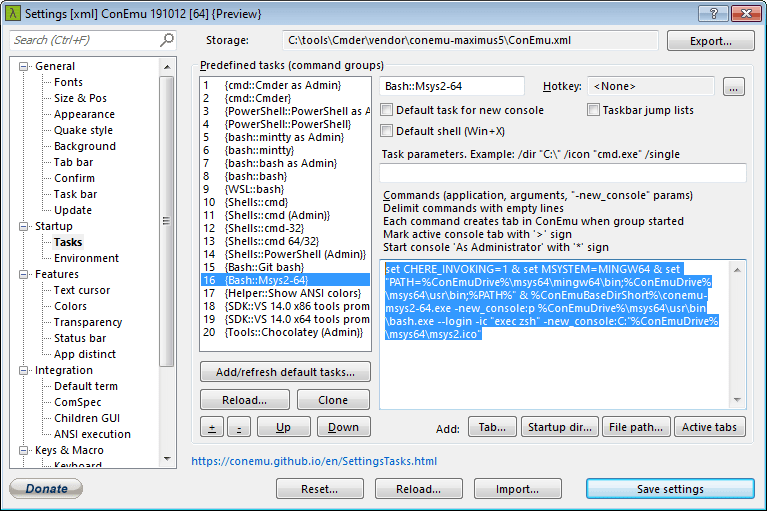 What we’re basically doing is, we’re setting CHERE_INVOKING env var to 1, which tells Bash to not cd into the HOME directory always. We’re also setting the MSYSTEM to MINGW64 to use Mingw as the MSYS System instead of the Default MSYS, which is slower. Then, we’re setting the PATH variable to the msys64\usr\bin and msys64\mingw64\bin to use Windows-native binaries, *.exe to serve the purpose of basic Unix commands, like clear , ls , rm , and even utilities like curl. Coming to the PATH, we’re also setting the path to the Native Windows %PATH% variable. This helps to use the already-installed utilities like node, kubectl, docker, npm, etc. And we’re also invoking conemu-msys2-64.exe , which helps to emulate the MSYS System. Then, we’re passing -new_console:p, which starts a new Cmder/ConEmu Console Session. After that, we’re invoking our hero, bash, and setting it as a login shell. The -c "exec zsh" part should be kept for future, now remove that. Just keep ....exe --login -i . After that, again some native Cmder commands.

So, after that, go to Startup section (the parent one, neither the Tasks, nor Environment) and select the Specified named task to the one we’ve just created/edited.

Notice how easy it is to install things. For example, adding rsync to Windows is historically not easy at all — you end up going through various ports, forks, etc. This is much easier.

Note about sudo: MSYS2 doesn't provide it. See this question or imachug/win-sudo.

If you had Git for Windows installed previously, uninstall it or just remove C:\Program Files\Git\..., or wherever you installed Git, from $PATH.

This updates msys2-runtime and therefore will ask you to close the window (not just exit the pacman process). Don't panic, simply close all currently open MSYS2 shells and MSYS2 programs. Double-check Task Manager and kill pacman.exe if it's still running after the window is closed, because it can linger. Once all are closed, start a new terminal again. 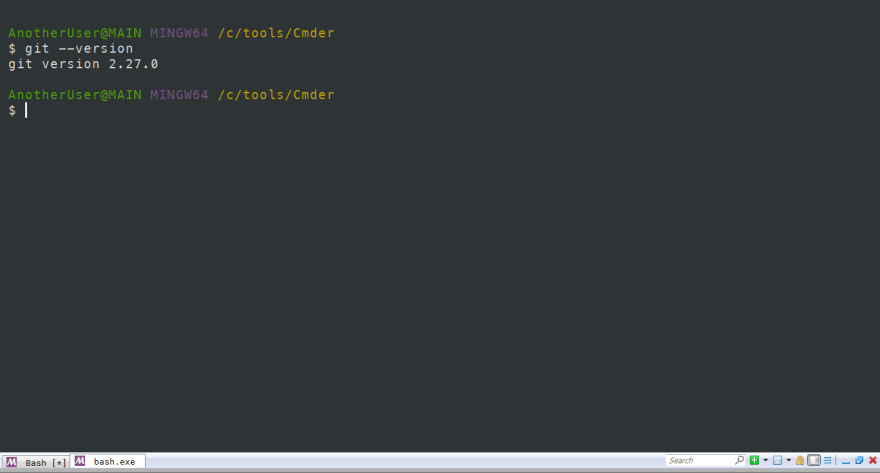 Finally, our heroine, ZSH! To install it, use:

After that, run clear to clear everything up :)

Remember above, I told to keep -c "exec zsh" for future? Now the time comes. Add the -c "exec zsh" to the required place. Now, exit Cmder and open it again, you will get zsh! Yay!

It looks cool at this point, but it still needs its supporting actor.

Here’s our supporting actor, Oh-My-Zsh, which helps us to theme our zsh to the one we’ve seen at the top!

To achieve the result above, we need to install a theme called Powerlevel10k. Run:

Then, type nano ~/.zshrc. This opens nano, a text editor. Edit the line where it says, ZSH_THEME="robbyrussell" to ZSH_THEME="powerlevel10k/powerlevel10k". Restart Cmder.

Note that I’ve added two extra plugins (look for the plugins=... line), zsh-autosuggestions and zsh-autocomplete. You can copy this and paste this to nano editor while editing ~/.zshrc . But you do need to install them. To do that, run:

You can learn more about them here and here

After that, restart your terminal.

Therefore, I conclude that, Windows users can also have a Linux-y environment, the most powerful!
If you have any questions/suggestions, please write down below. And if I’ve made any mistake, please tell me. I’ll fix it ASAP.
Happy hacking!

Once suspended, shrihankp will not be able to comment or publish posts until their suspension is removed.

Once unsuspended, shrihankp will be able to comment and publish posts again.

Once unpublished, all posts by shrihankp will become hidden and only accessible to themselves.

If shrihankp is not suspended, they can still re-publish their posts from their dashboard.