This post summaries the Raft consensus algorithm presented in the paper In Search of An Understandable Consensus Algorithm by Diego Ongaro and John Ousterhout. 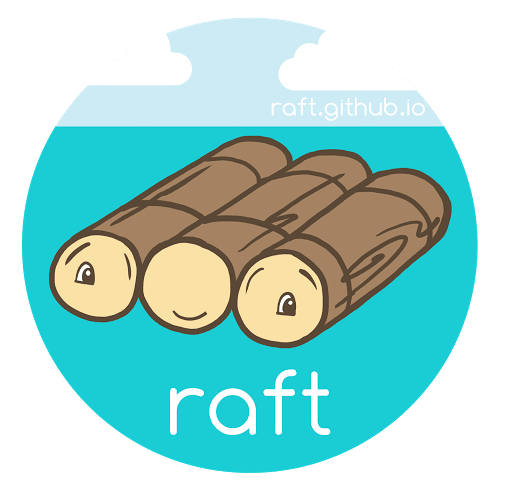 Raft is a distributed consensus algorithm. One of its important design goals was being understandable. It solves the problem of getting multiple servers to agree on shared of state even in the face of failures. The shared status is usually a data structure supported by a replicated log. We need the system to be fully operational as long as a majority of the servers are up.

Raft works by electing a leader in the cluster. The leader is responsible for accepting client requests and managing the replication of the log to other servers. The data flows only in one direction: from leader to other servers. 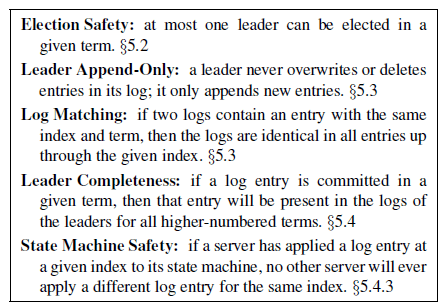 Raft ensures these properties are true at allÂ times.

Each server in one of the three states: leader, follower or candidate.

In normal operation there is exactly one leader and all of the other servers are followers. Followers are passive: they issue no requests on their own but simply respond to requests from leaders and candidates. The leader handles all client requests (if a client contacts a follower, the follower redirects it to the leader). The third state, candidate, is used to elect a new leader.

Raft divides time into terms of arbitrary length, each beginning with an election. If a candidate wins the election, it stays leader for the rest of the term. If the vote is split, then that term ends without a leader. The term number increases monotonically. Each server stores the current term number which is also exchanged in every communication.

.. if one server’s current term is smaller than the other’s, then it updates its current term to the larger value. If a candidate or leader discovers that its term is out of date, it immediately reverts to follower state. If a server receives a request with a stale term number, it rejects the request.

Raft makes use of two RPCs to carry out its basic operation.

The leader periodically sends a heartbeat to its followers to maintain authority. A leader election is triggered when a follower times out after waiting for a heartbeat from the leader. This follower transitions to the candidate state and increments its term number. After voting for itself, it issues RequestVotes RPC in parallel to others in the cluster. Three outcomes are possible:

The client requests are assumed to be write-only for now. Each request consists of a command to be executed ideally by the replicated state machines of all the servers. When a leader gets a client request, it adds it to its own log as a new entry. Each entry in a log:

It needs to replicate the entry to all the follower nodes in order to keep the logs consistent. The leader issues AppendEntries RPC to all other servers in parallel. The leader retries this until all followers safely replicate the new entry. When the entry is replicated to a majority of servers by the leader that created it, it is considered committed. All the previous entries including those created by earlier leaders are also considered committed. The leader executes the entry once it is committed and returns the result to the client.

The leader maintains the highest index it knows to be committed in its log and sends it out with the AppendEntries RPCs to its followers. Once the followers find out that the entry has been committed, it applies the entry to its state machine in order.

When sending an AppendEntries RPC, the leader includes the term number and index of the entry that immediately precedes the new entry. If the follower cannot find a match for this entry in its own log, it rejects the request to append the new entry. This consistency check lets the leader conclude that whenever AppendEntries returns successfully from a follower, they have identical logs till the index included in the RPC.

However, the logs of leaders and followers may become inconsistent in the face of leader crashes.

In Raft, the leader handles inconsistencies by forcing the followers’ logs to duplicate its own. This means that conflicting entries in follower logs will be overwritten with entries from the leader’s log.

The leader tries to find the last index where its log matches that of the follower, delete extra entries if any and add the new ones.

The leader maintains a nextIndex for each follower, which is the index of the next log entry the leader will send to that follower. When a leader first comes to power, it initializes all nextIndex values to the index just after the last one in its log.

With this mechanism, a leader does not need to take any special actions to restore log consistency when it comes to power. It just begins normal operation, and the logs automatically converge in response to failures of the Append-Entries consistency check. A leader never overwrites or deletes entries in its own log.

Raft makes sure that the leader for a term has committed entries from all previous terms in its log. This is needed to ensure that all logs are consistent and the state machines execute the same set of commands.

During a leader election, the RequestVote RPC includes information about the candidate’s log. If the voter finds that its log it more up-to-date that the candidate, it doesn’t vote for it.

For the configuration change mechanism to be safe, there must be no point during the transition where it is possible for two leaders to be elected for the same term. Unfortunately, any approach where servers switch directly from the old configuration to the new configuration is unsafe.

Raft uses a two-phase approach for altering cluster membership. It switches to an intermediate configuration called joint consensus , then once that is committed, it switches over to the new configuration.

Joint consensus combines the new and old configurations as follows:

When a leader receives a configuration change message, it stores and replicates the entry for join consensus C<old, new>. A server always uses the latest configuration in its log to make decisions even if it isn’t committed. When joint consensus is committed, only servers with C<old, new> in their logs can become leaders.

A fantastic visualization of how Raft works can be found here:

More material such as talks, presentations, related papers and open source implementations can be found here:

I have dug only into the details of the basic algorithm that make up Raft and the safety guarantees it provides. The paper contains lot more details and it is super approachable as the primary goal of the authors was understandability. I definitely recommend you read it even if you’ve never read any other paper before.

Why GPUs are great for Reinforcement Learning?