At sKalable we are Kotlin Obsessed! Making the environment better is part of our daily mission. We want to make all things KotlinJS amazingly easy to work with too.

As part of our pursuit to clean up code, we will be delving into state management in this two part tutorial. 😎

useState part of React Hooks for state management is something that even Javascript and Typescript engineers struggle with from time to time. We are going to reduce this struggle within the React ecosystem using KotlinJS and the ever incredible Kotlin-React library.

To get an idea of what we are trying to do we need to grasp what state is in react programming.

The React library provides components with a built-in state management object. In this state object we can store and manipulate the state of the React component on the fly. If the state object changes, then the component will re-render with the updated state and any UI changes will be reflected.

How does it work 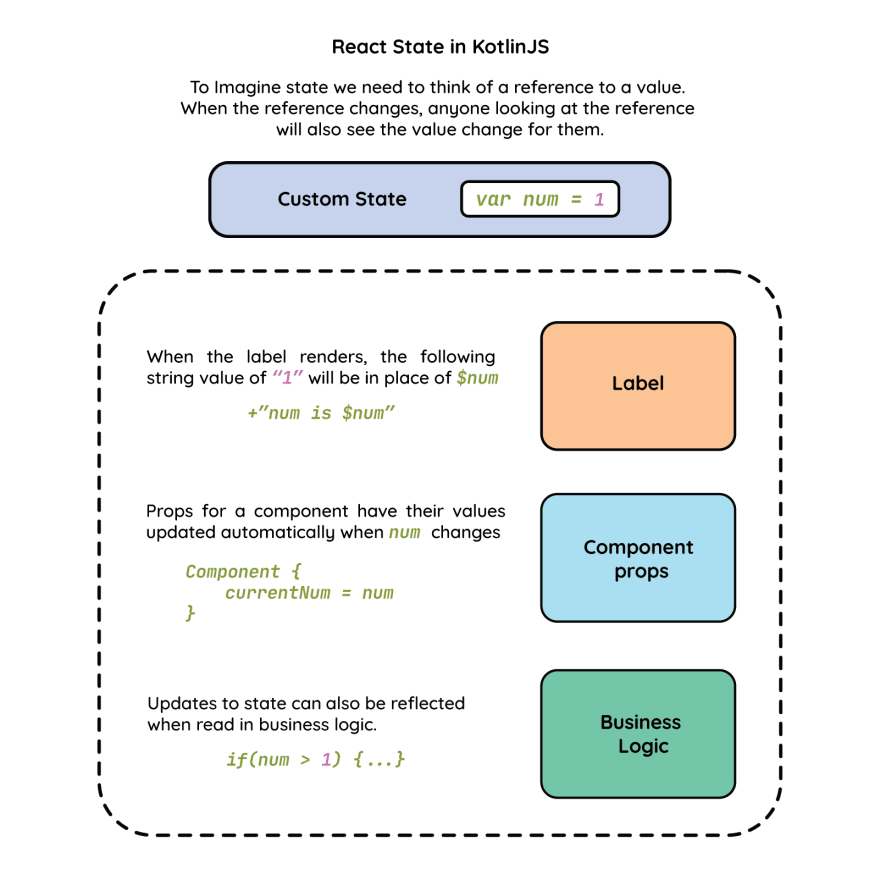 We can describe state as being reactive since it stores dynamic data for the component. The state object itself allows the component to keep track of changes and updates to the data and render views accordingly. It works similarly to the Observer Pattern given that it defines a subscription mechanism to notify observers of the data about any events that happen to the payload they are observing.

Moving on we will cover state in both Class and Functional components.

A Stateful Class component is lifecycle aware and has its state defined in an external interface. They can also initialise state as a class property (which we will cover later in The useState Hook) or in a constructor function — both approaches achieve the same result.

When we first initialise our custom state, it creates a getter and setter for the value of the property we want to have state aware. The getter is named similarly to a property variable in Kotlin (see naming properties in Kotlin) such as count or word, i.e. descriptive of the data it holds.

To update the data in this getter we use the function defined as setState. Inside the Lambda block from this function we have access the variable we want to update.

Let's see the code in action!

Even though there is nothing wrong with class components, they can be quite verbose and heavyweight so let's compare how this code looks when optimised with the useState hook and Functional Components!

Prior to React 16.8, functional components could not hold a state. Luckily, this is no longer the case as we can now use React Hooks that include the power of useState!

Before this, one of the key differences between them was that functional components lacked the capability to hold an abstracted state property. With the introduction of the useState hook there is now an alternative to this. :)

The example above shows a simple useState variable of type String. The default value is initialised in the parameters of the useState function — i.e useState("hello"), this would declare the getter value as "hello". To update the value of the word we use the function setWord("World"). Essentially, word is the getter and setWord is the setter.

We can actually tidy up this logic further with delegation using the by keyword to delegate the get and set of useState.

To benefit from delegation, we need to convert the way we instantiate the state variable. To have state capability, the type of the property needs to become mutable — i.e. val to var. There is also no need to keep two properties for get and set either. Renaming the variable is important as it has a hidden superpower.

Here @sKalable our preference is to give it a suffix named State for more clarity around our code and hidden functionality.

lets refactor our Class Component to a Functional Component!

Running the code again we can see it works exactly the same as before, except with much less boilerplate.

There we have it, two approaches to using state in both a Class and Functional Component!

Effective code is clean and readable code. Also, you might be wondering how to handle multiple states? We cover this in Part 2 of KotlinJS and State Hooks!

As always, you can find the sample project for the above here

Thank you for taking your time to learn with us! Feel free to reach out and say hello.

@sKalable we are a Kotlin-centric agency that builds code to ensure it is Maintainable, Flexible and of course, sKalable.

Follow us on Twitter and Dev.to and LinkedIn to get the latest on Kotlin Multiplatform for your business or personal needs.

skalable-dev
At sKalable we love Kotlin! We work with it at both the frontend and backend and everywhere we can inbetween.
Managing Gaps in Rows, Columns (or even both!) with KotlinJS
#kotlin #css #html #codequality
Making your KotlinJS Website Mobile-Friendly
#react #kotlin #html #codequality
KotlinJS and MULTIPLE State Hooks (Part two)
#kotlin #react #javascript #codequality