This post discusses how to create a homebrew installer to package any script, application or tool, in this case a Kotlin (Java) based application. This was done for a Kotlin framework called Slate Kit, and here on Git.

Building scripts, applications and tools is a part of software engineering and a pretty common task. This process though typically involves a runnable application, installing, uninstalling, upgrading and packaging some dependencies/resources. This can be trivial or somewhat complex. Fortunately, there are package managers like homebrew that handle most of the boilerplate. While homebrew is great, and easy to use as an end-user who installs software, I found the documentation and guides on creating an installer somewhat difficult to navigate.

Before we get into the details of coding an installer, we need to first understand some terms and concepts. Most of these are represented here at Homebrew Terms. However, I want to elaborate on a few that are relevant for this post. These are also represented in the diagram below 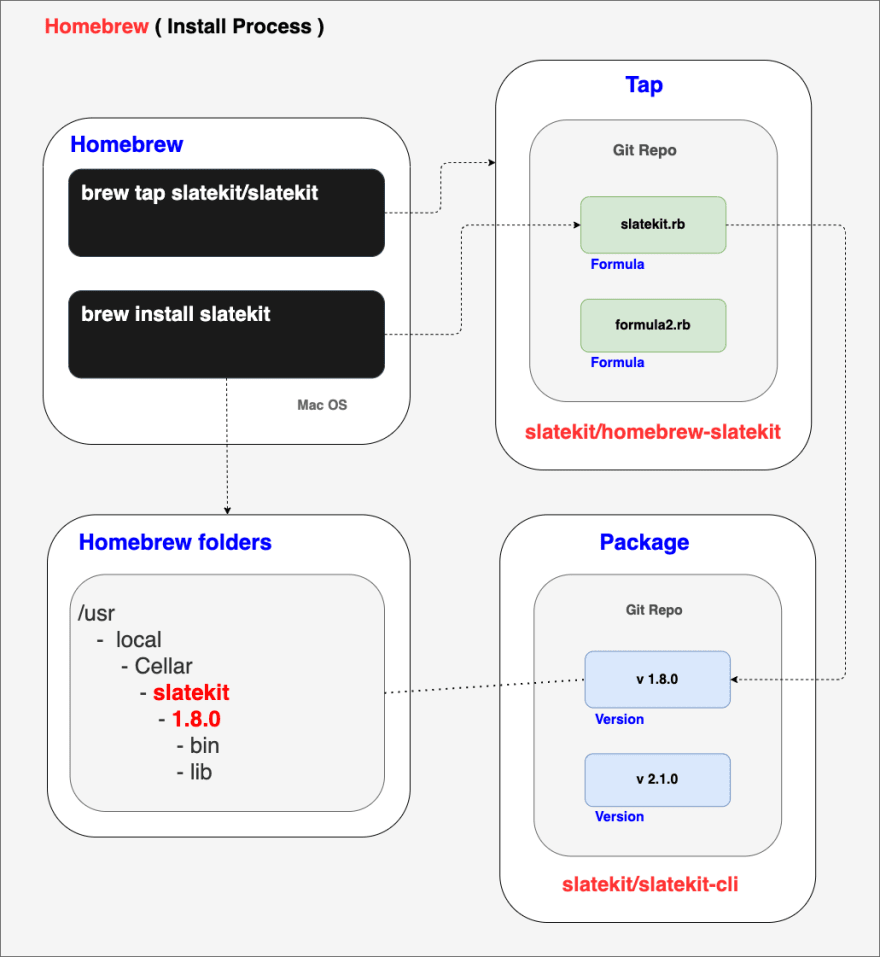 This is a quick example of the entire process of setting up your tap, installing your package and then using your package. In this case the tap is slatekit/slatekit ( homebrew automatically interprets this using the homebrew- prefix, so this actually is slatekit/homebrew-slatekit, the formula is also called slatekit ( slatekit.rb ) and finally the executable script is slatekit ( a bash script that runs the Kotlin application ).

You need to first create your git repo for the actual package that you plan to install and use. Its libraries, dependencies, and resources need to be stored in one git repo. In this case its Slate Kit CLI. There is a file called slatekit and this represents a shell script that is the actual tool that will be used. You also need to create a release of this package so there is a zip/tar containing all items in the repo, for example v1.34.5. Since this is a Kotlin/Java based application, the repo contains the libraries( jars ) and some resources, and an executable. This Kotlin/Java application was originally built using gradle 'application' plugin and running gradle distZip to package the slatekit shell script all the libraries.

You need to create another git repo containing the homebrew formula that will perform the install. The tap can contain 1 or more formulas. In this example the tap is slatekit/homebrew-slatekit. This tap provides homebrew a place to look for formulas. Some formulas are submitted to Homebrew for proper approval and available without requiring a tap ( later step ), but this example uses a custom tap so that you don't need to go through the approval process.
NOTE: The name of the git repo must start with homebrew-

Now you need to create a formula that defines your package and performs the installation steps. A formula contains a reference to the url/version of the package above, so brew can download the package and unzip it so the formula can install the contents. The formula in this example is slatekit.rb. The most relevant things in the formula are the url, sha, and the steps in the install method.

Run the brew create command below and the script is created in /usr/local/Homebrew/Library/taps/homebrew/homebrew-core/Formula/slatekit-cli.rb which will have the sha.

There a few important things regarding whats happening in the install step. This is where you specify what to install from the package version that was downloaded.

Finally, once you have all this set up, you can simply run the following commands to install the tap and package.

The first line brew tap slatekit/slatekit is really a call to download the tap and formula from https://github.com/slatekit/homebrew-slatekit. The second call brew install slatekit is call to run the formula slatekit.rb
NOTE:
You may experience a few issues during install

Now with the package installed, you can immediately start using it. In this case, slatekit generates new projects. So we can use it like this :

If you want to uninstall everything, you can do

Well, thats finally it. I created a homebrew installer to allow for a command line tool to generate slatekit projects making it very easy for new users to get started quickly. It sounds like quite a lot at first, but there are only 3 concepts, the package( your script, app, tool), the tap (git repo for formulas), and the formula (installer). Hope this helps!

How to do a Select clause comparison of LocalDateTime in JPA