Metaprogramming enables you to produce elegant, clean, and beautiful programs as well as their exact opposite programs. This book will teach you the powerful metaprogramming concepts in Ruby, and how to use them judiciously. 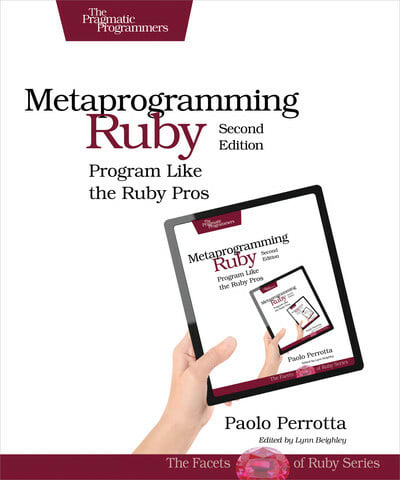 In most programming languages, language constructs like variables, classes, methods, etc. are present while you are programming, but disappear before the program runs. They get transformed into byte-code (Java) or CIL (C#), or plain machine-code (C). You can't modify these representations once the program has been compiled.

In Ruby, however, most language constructs are still there. You can talk to them, query them, manipulate them. This is called introspection. For example, the example below creates an instance of a class and asks for its class and instance variables.

Objects are first-class citizens in Ruby. You'll see them everywhere. However, objects are part of a larger world that also includes other language constructs, such as classes, modules, and instance variables. All these constructs live together in a system called the object model.

This is called monkeypatching, and it can cause problems if you re-define existing methods unintentionally. However, if you know what you are doing, monkeypatching can be very powerful. For example, the ActiveSupport gem in Rails makes heavy use of monkeypatching to open Ruby core classes and define new functionality on them.

Everything that applies to objects also applies to classes. Each class is also a module with three additional instance methods: new, allocate, and superclass.

What happens when you call a method?

The receiver is the object that you call a method on, e.g. in the statement myObj.perform(), myObj is the receiver.

The ancestor chain is the path of classes from a class to its superclass, until you reach the root, i.e. BasicObject. 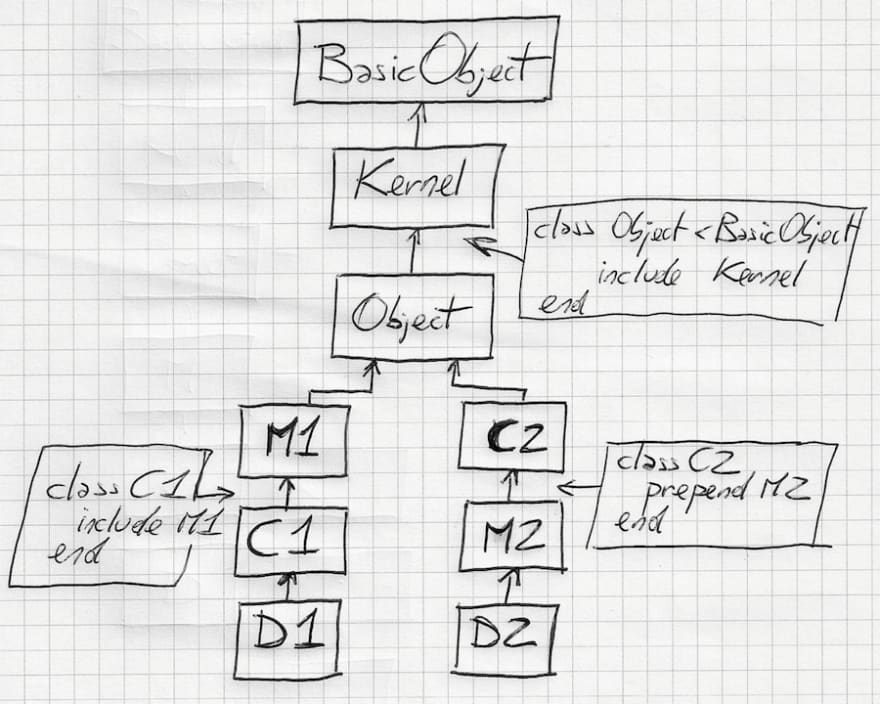 The Object class includes Kernel module. Hence the methods defined in Kernel are available to every object. In addition, each line in Ruby is executed inside a main object. Hence you can call the Kernel methods such as puts from everywhere.

If you add a method to Kernel, it will be available to all objects, and you can call that method from anywhere.

The Ruby interpreter executes each and every line inside an object - the self object. Here are some important rules regarding self.

At the top level, self is main, which is an Object. As soon as a Ruby program starts, the Ruby interpreter creates an object called main and all subsequent code is executed in the context of this object. This context is also called top-level context.

When you call a method, you're actually sending a message to an object.

Ruby provides an alternate syntax to call a method dynamically, using the send method. This is called dynamic dispatch, and it's a powerful technique as you can wait until the last moment to decide which method to call, while the code is running.

When you call a method on an object, the Ruby interpreter goes into the object's class and looks for the instance method. If it can't find the method there, it searches up the ancestor chain of that class, until it reaches BasicObject. If it doesn't find the method anywhere, it calls a method named method_missing on the original receiver, i.e. the object.

The method_missing method is originally defined on the BasicObject class. However, you can override it in your class to intercept and handle the unknown methods.

This BasicObject#instance_eval method evaluates a block in the context of an object.

The above program produces the following output

A Ruby class definition is just regular code that runs. When you use the class keyword to create a class, you aren’t just dictating how objects will behave in the future. You are actually running code.

Evaluates a block in the context of an existing class. This allows you to reopen the class and define additional behavior on it.

A benefit of class_eval is that it will fail if the class doesn't already exist. This prevents you from creating new classes accidentally.

You can define methods on individual objects, instead of defining them in the object's class.

When you define the singleton method on the animal object, Ruby does the following:

You can define attributes on a class as follows:

Remember that an attribute is just a pair of methods. If you define an attribute on the singleton class, they become class methods.

Though metaprogramming in Ruby looks like magic, it's still just programming. It is so deeply ingrained in Ruby that you can barely write idiomatic Ruby without using a few metaprogramming techniques.

Writing perfect metaprogramming code up-front can be hard, so it’s generally easy to evolve your code as you go.

Keep your code as simple as possible, and add complexity as you need it.

When you start, strive to make your code correct in the general cases, and simple enough that you can add more special cases later.

This post was originally published on my blog, where you can find my notes for other books I read. Hope you found it useful.

Let me know in the comments if you found any mistakes. I look forward to your feedback.

About "Cannot use import statement outside a module" in JavaScript

First Thoughts on Zig - Getting Started and Learning Resources

Once suspended, software_writer will not be able to comment or publish posts until their suspension is removed.

Once unsuspended, software_writer will be able to comment and publish posts again.

Once unpublished, all posts by software_writer will become hidden and only accessible to themselves.

If software_writer is not suspended, they can still re-publish their posts from their dashboard.

Once unpublished, this post will become invisible to the public and only accessible to Akshay Khot.

Thanks for keeping DEV Community 👩‍💻👨‍💻 safe. Here is what you can do to flag software_writer:

Unflagging software_writer will restore default visibility to their posts.