We're going to style the basic create react app with styled-components to look something like this:

But first, preamble✨: I have always struggled with styling sites, it seems to be an aspect of starting web development that is either an afterthought or glossed over. Up until December last year I didn't really like styling anything at all with CSS, it was a chore rather than something I enjoyed doing.

This was until I started using styled-components, when I joined a build to learn project for a Chingu voyage (grad.then() if you're interested) we decided to use a CSS-in-JS package, Marina who was on my team was such an inspiration for me watching how components were styled and really gave me the confidence to start using styled-components.

me with css before

I want to share what I have learned so far by going through styling a basic react application.

There's some basic CSS concepts in this post that I was not aware of before starting out with styled-components that I presume are assumed in styling web pages.

Styling the body element of a site is assumed, so for when you are starting out with a blank canvas there are some defaults for all modern web browsers you add to your site, like leaving font size at 16px (or 1rem) or box-sizing: border-box; there's some packages out there to take care of this for you as well.

This guide is being used with the following dependency versions.

Ok lets bootstrap the basic react application you get when using Create React App with npx, if you already have Create React App installed globally then you can use the command without npx.

Ok, now we have the basic app we can style, thankfully Dan has kindly provided the starting styles for us so let's begin my using them with styled-components.

The way the CRA CSS is laid out, assumes that you will have a corresponding CSS file for each component, which can help with maintaining the CSS and lends to the React idea of having all your files separated into their component parts.

In styled-components we'd create components for each of these elements that replace the aforementioned className's. Ok we can start by migrating our styles into components, let's do one component first to get an idea of where we're going with this.

Now lets look at <div className="App">, it's the top level div for this component and is what I like to call the wrapper for the component. So lets give it an imaginative name AppWrapper.

Referring to the App.css there is text-align: center; which belongs to this, so:

So here we have defined the AppWrapper const as a styled.div followed by back ticks inside of the back ticks we can write any regular CSS with the exact same CSS syntax you wold in a normal .css file.

Now that we have our AppWrapper we can replace the top level div on the App.js component.

styled-components all the things

So let's do that for the remaining four CSS classes, and take a look, I'll define them underneath the AppWrapper here:

So first off we've created a variable for the React svg animation, you'll need to import the keyframes helper from styled-components like so:

this can now be used throughout the App.js component and we can add an on hover selector to any of our styled-components within this module. Here we're going to add it to the AppLogo to keep the super sweet rotating React logo.

Ok, our app shouldn't look any different as we haven't added in our styled-components to the app render() method, so let's do that now.

Let's also change the intro text. You can add a wrapper for the <code> tags something like:

But if you prefer you can nest selectors within the component, like:

Let's have a look at the render() method now…

Now all the classes originally used in App.js have been replaced so there's no need for the import './App.css' mapping, remove that aaaaand! Still no change!! Which is a good thing because at the moment we're swapping out the .css files for styled-components.

Cool, we have now replaced all the css with styled-components, now we can take a look at injectGlobal.

Lets take a look at how the App.js file should look before we move on:

Style the body with injectGlobal

For styling the body of our react app we currently have the index.css file that is being imported into the mounting point of our app in the index.js file.

To style the body we can use injectGlobal from styled-components which adds the styles directly to the stylesheet.

To do this you bring in the injectGolabl named export from styled-components and add your styles between the back ticks.

Let's add a theme folder in the src directory and add a globalStyle.js file where we can keep all our styles we want to use throughout the app, keeping the styles on one place will make changes simpler.

In src/theme/globalStyle.js we'll need to import the injectGlobal named export from styled-components and add the index.css styles into it:

Ok, now we're adding the body style to the stylesheet directly so there is no need for the index.css file mapping that is in index.js it should look like this now:

We should still have our nice sans-serif font going on, but let's add in some nice Roboto for the body and Montserrat for the heading in our globalStyle.js module. We can import Google fonts with an @import in injectGlobal and apply Roboto to the body:

Cool now we can add our imported font for or app header, and there's the option if we want all our <h1>'s to use the same font we can add that to the injectGlobal in our globalStyle.js module.

Then we can adjust the weight on the AppTitle component:

To add the additional styles for fonts like Montserrat and Roboto you can specify them in the @import url() you'll notice that Montserrat has :400,900 after it that is specifying the styles regular (400) and black (900), you can import as many as you like from Google fonts (CDN) but the more you import the longer it will take to load them, if you have a lot of fonts and styles you want in your app then consider adding them to a folder in the project, like:

Themes are often used to change the look and feel of a wide range of things at once. For example, you may have a night and day mode like in Twitter. You can create your own themes in styled-components too. 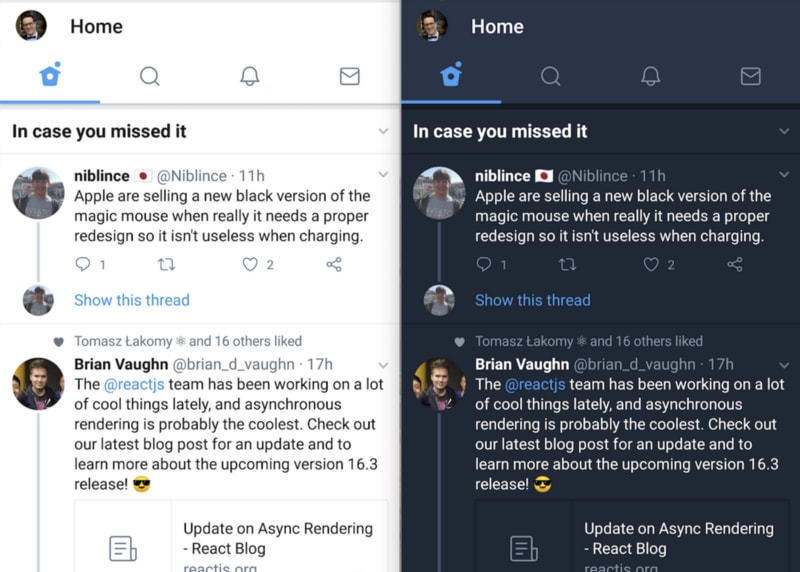 Use the styled-components ThemeProvider

Now say we want to have several components in our app that use a CSS colour property color: #6e27c5 instead of hard coding it through the app for every component that uses it we can use the styled-components ThemeProvider.

For this we will need to import the ThemeProvider named export from styled-components, then define a theme object where our colour is going to live:

Let's add the newly created theme to the globalStyle module we created previously.

Now the theme properties can be used as props in our styled-components, let's change the background-color: in the AppHeader component, whilst we're at it let's add a dark: #222 property to our theme object and use that for the color property:

Now we can change our app theme globally

Ok cool, can you change theme?

This is what I was thinking and it turns out you can, there's a great Stack Overflow answer from Max on it.

It got me thinking if you can switch between themes rather than define them for different sections like in the SO answer.

I started off by defining two themes (with imaginative names) in the globalStyle.js module:

Now we need a way to switch between the two theme objects, let's use a select box for them, let's create a components folder and in there make a ThemeSelect.js component, we can worry about refactoring the App.js component when I'm not here :

You've probably noticed the onChange={e => this.props.handleThemeChange(e) event, we're going to add that method to the App.js component along with some state to
manage what theme is selected.

To summarise what we have done with App.js here is, add some state to default to theme1 where the two themes are imported as named exports of the globalStyle.js module.

Add a method to handle the change of the ThemeSelect.js component handleThemeChange this is where we can switch between the two theme objects.

Let's try it out, we should be able to switch between the two themes we've defined now.

Here I've added a Button component to the globalStyle.js for us to use in the App.js component. For the sake of convenience we're going to add it here, you may find if you have a lot of similar components that you are reusing throughout your app that it may be a good idea to add them all to a components folder.

We can import the Button as you would any other component and use it in the module, as we're extending it this means we only need to apply the specific styles we want for that button. But first in the App.js component we can specify a normal and a primary button:

Now to specify another button with the same css as the imported button we can extend it, like in this example we'll make the button take up 40% of the screen width and make the corners more rounded:

Now we can switch the theme and have it applied to our components using the theme, pretty neat, right?

I have put all of the examples we have gone over here in a working example for you to play around with the theming and styled-components, enjoy.

There's also the spectrum.chat community and of course Stack Overflow.

Once suspended, spences10 will not be able to comment or publish posts until their suspension is removed.

Once unsuspended, spences10 will be able to comment and publish posts again.

Once unpublished, all posts by spences10 will become hidden and only accessible to themselves.

If spences10 is not suspended, they can still re-publish their posts from their dashboard.

Once unpublished, this post will become invisible to the public and only accessible to Scott Spence.

Thanks for keeping DEV Community 👩‍💻👨‍💻 safe. Here is what you can do to flag spences10:

Unflagging spences10 will restore default visibility to their posts.