The git revert command is used to ‘undo‘ the changes you have made in the past. Simple. But unlike other undo commands, git revert will introduce a new commit that has the inverted changes.

For example, consider the below git history

git revert will always take a commit hash. So you need to pass the commit you need to revert.

E’ is the reverted commit. E’ will contain reverted changes of E. But you can see that in the git history commit E is also present. And changes made by E is no longer present in the working directory.

This is one of the advantages of git revert. In this case, the git history is very clean and everyone reading the git history will understand that the particular commit has reverted for some reason.

How to do git revert

As mentioned earlier, git revert will take a commit hash.

In the above image, you can see the commit history. See the HEAD commit (the latest commit). I have added a file ‘three.txt‘. Now let’s try to revert that commit.

You can see that the new commit has introduced that explains that it reverted the previous commit.

When you are reverting a commit sometimes you don’t need Git to do the commit for you. You may have to review the changes reverted by Git and then commit it yourself.

In the above example, you can see that I have reverted with -n option. So Git has reverted the changes but it didn’t commit the changes. It has just staged all the reverted changes. You can review those changes and commit them yourself.

Revert a series of commits

Reverting a series of commits will always come in handy.

A and B are the commit hashes. The above command will revert commits from A to B. And remember A should be older than B.

Reverting a merge commit is somewhat tricky. When there is a merge there are two branches included. The parent-B branch is merged into the parent-A branch.

So when you are reverting a merge commit you have to specify whether you need to revert changes of the parent-A branch or the parent-B branch.

In this above case, E is the merge commit. And if you run git revert E then git will throw a warning. You have to mention the parent branch number.

This will revert all commits from the merge branch. So changes from G - H are reverted. So the git history will be like

E’ is the reverted merge commit.

Reverting a merge commit means you are inverting all the changes from the merge branch so that you can’t merge the branch again. You have to revert the ‘revert commit‘ if you need to merge back the branch.

In the above example, you can’t merge branch B to branch A again. Because it is been reverted in E’.

Assume after sometimes, you have made some changes to branch B and now you are fine with merging that branch. To do this, you have to revert the ‘revert commit‘.

The above command will revert the E’ commit. And now you can merge branch B to branch A.

Reverting a pull request in Github and in Gitlab

In Github you should have probably noticed an option to revert a pull request. 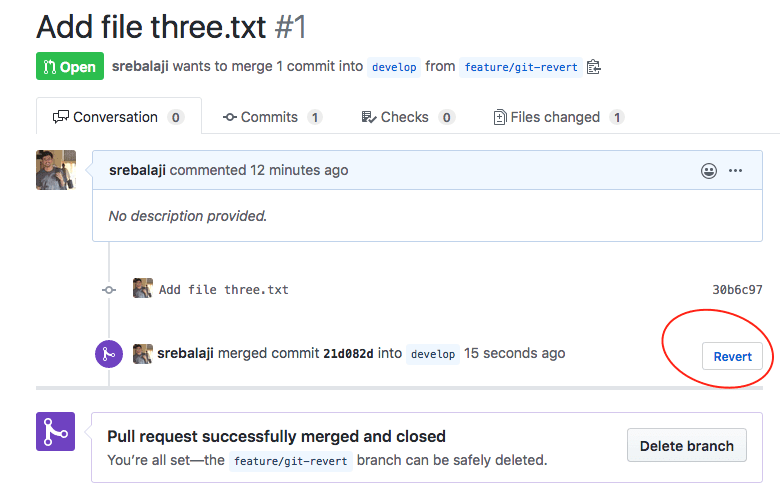 If you have to revert a merged pull request you can use this option.

Assume that you have reverted the pull request (PR).

Now the tricky part. For some reason, you have to merge the branch again. You may have some updated commits in the branch too.

If you take a pull-request again with the branch you can see there are no changes to be merged. Because the inverted changes will already be present in the current branch so Git won’t show any changes to merge. 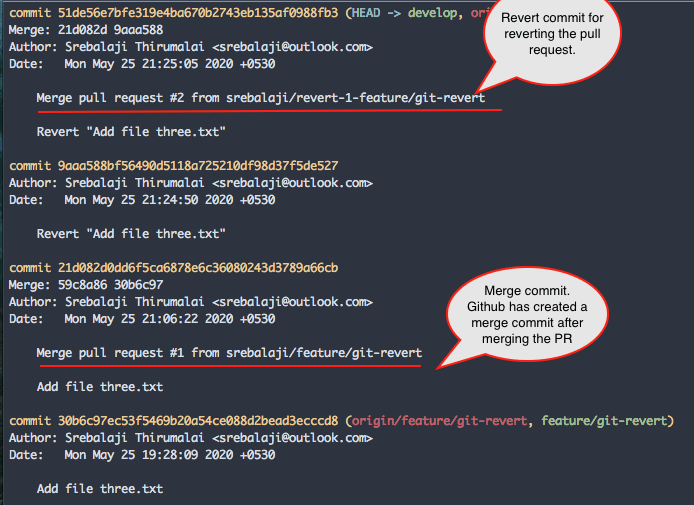 In the above image, you can see that we have merged the pull request and then reverted the merged pull request.

As mentioned earlier, now to merge the branch again you have to revert the ‘revert commit‘. There are two options to do it.

First, you can directly do it in Github itself. When you are reverting the PR, Github will create a branch that will have inverted changes and it will create a PR for those changes. 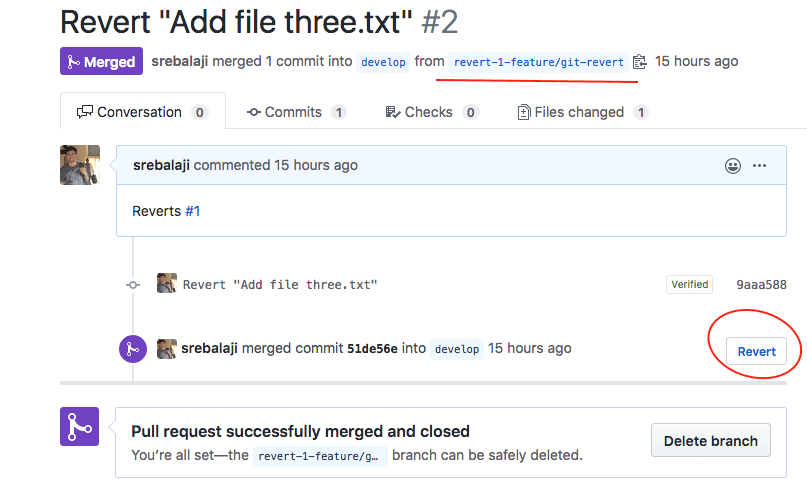 In the above image, you can see that Github has created a new branch revert-1-feature/git-revert and that PR has been merged to revert the changes.

Now you can again revert the changes from the ‘revert branch‘. Simple. So you have reverted the reverted changes :P. Github has made the task simple.

There is also another way of doing it. You can just revert the ‘revert commit‘ in the local and push it. Refer to the above commit history.

This is the same as reverting the PR. Git will just add another revert commit and then can push it.

Reverting is a very useful tool to ‘undo‘ the changes in your branch. It won’t affect history and everyone can understand what has been done.

If you have any queries, feedback, or anything you leave a comment.

If you need me to cover some specific topics in mind you can let me know. :)

If you have come this much, then I think you are much interested in Git. You can subscribe to GitBetter to get tricks, tips, and advanced topics of Git.

Made in India. Indie Hacker. Love to code. :)

Updating to the New WSL 2: Is It Really 20x Faster? - A User's Installation Guide

👨🏻‍💻 UnderStand the Most Powerful 💪 Function of Javascript