git cherry-pick is one of the useful commands in Git that helps you to copy, paste commit(s) from one branch to another. Simple.

Note that cherry-pick will copy the commits so that the original commit will still be present in the source branch.

Most devs will consider cherry-picking is a bad practice that can cause problems like having duplicate commits in multiple branches, messing up with the git history, and others. But cherry-pick is one of the most powerful tools and if you understand how it works and if used with caution, then it can be really useful.

As you know, you can get the commit hash from git log or others.

The above command will copy the commit with the corresponding hash and paste it in the current branch you are in.

In the above image, you can see that I have cherry-picked a commit and it has been applied to the current branch develop.

Consider the below commit history.

You can see I is present in both branches now.

In the above image, you can see the cherry-picked changes are staged but not committed yet. 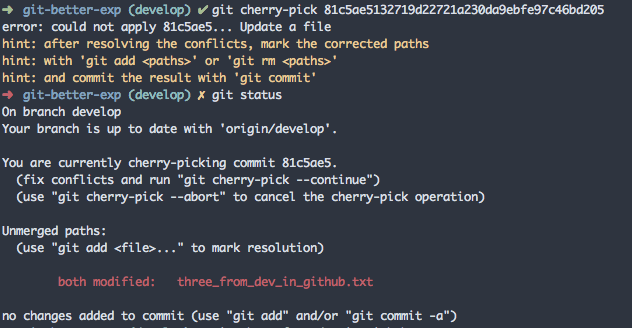 After resolving the conflicts, you can continue with the cherry-pick with the below command.

If you decided to abort the cherry-pick with conflicts, you can use

In the above example, I have resolved the conflict, then have staged the file. After that, I’m continuing with the cherry-pick.

git cherry-pick a series of commits

In the above command, A and B are commit hashes.

The above command will include all commits from A to B excluding A. And remember A should be older than B.

This command will include all commits from A to B including A.

Cherry-picking a merge commit is somewhat tricky. When there is a merge there are two branches included. A parent-B branch is merged into the parent-A branch.

So when you are cherry-picking a merge commit you have to specify whether you need to cherry-pick parent-A branch or the parent-B branch.

In this above case, E is the merge commit. And if you run git cherry-pick E then git will throw a warning. You have to mention the parent branch number.

This will take all commits from C - E.

Or you can do

But when cherry-picking the merge commit, always proceed with caution. There is a high possibility that you can mess up with history. So you have to decide in the given situation whether cherry-picking a merge commit is good or not.

Other useful commands I found

Assume you have branches A and B. If you are applying this command from branch A, then all the commits from B that are older than branch A will be applied to branch A.

If you have any queries, feedback, or anything you can just add a comment.

If you have come this much, then I think you are much interested in Git. You can subscribe to GitBetter to get tricks, tips, and advanced topics of Git.

Made in India. Indie Hacker. Love to code. :)

How did this image brick Android phones?

Who is a back-end programmer and how to become one?