The mission is to develop an open source machine learning solution which will use computer vision to analyse (home made) sports videos.

For starters I want to focus on Basketball games but the solution should also be applicable to any sport which has players and a court.

Further documentation, code examples and eventually a working open-source solution will get published on GitHub.

Feel free to contact me if you want to help out, have suggestions or know about existing open source projects that we can (re)use.

Basically similar to the football analytics video shown below but then for basketball and open sourced. 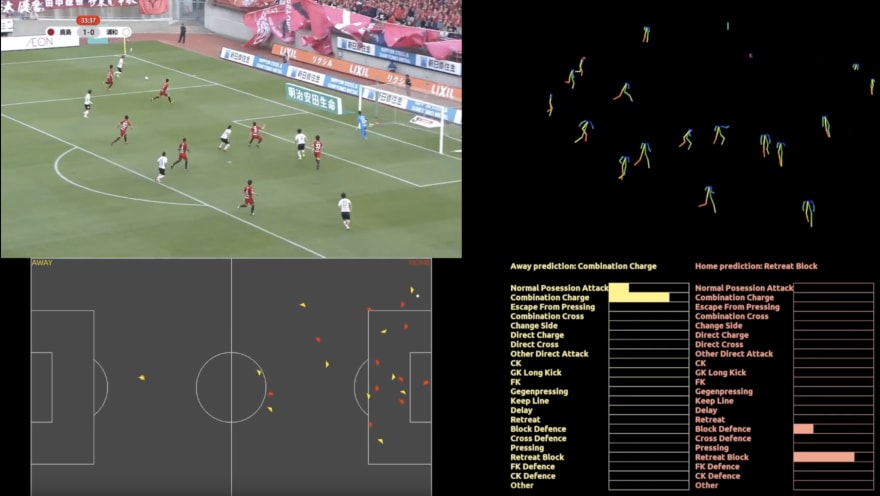 Based on the Player Tracking and Analysis of Basketball Plays paper, the following machine learning models need to be created.

The video frames that we obtained from Youtube were initially converted from the BGR to the HSV (hue, saturation
and value) color model. We then focused on the H-plane in order to create a binary model of the system. Then, we
proceeded to perform erosion and dilation of the image in order to get rid of artifacts that were not related to the court. Subsequently, we made use of the Canny edge detector to detect the lines in our system. Finally, we performed the Hough transform in order to detect the straight lines in the system. 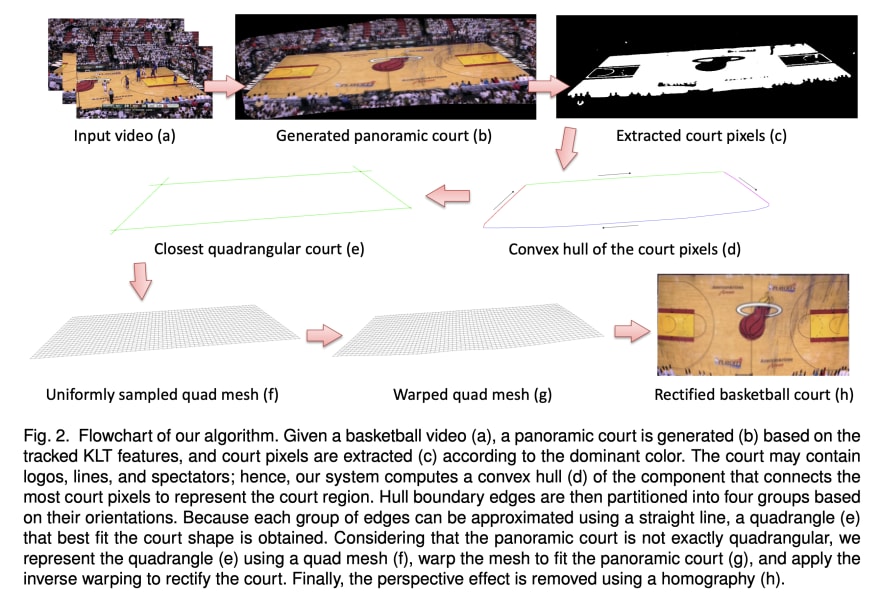 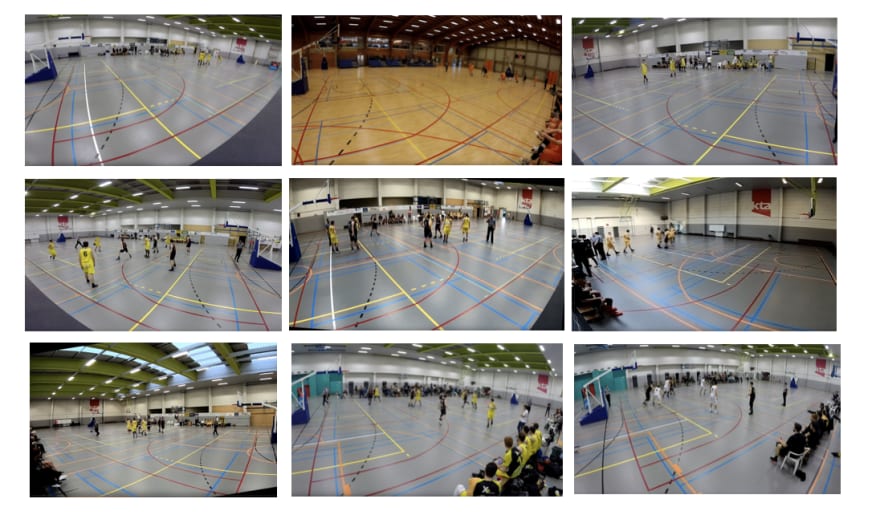 As you can see in the images above, these are not NBA courts. Many criss-cross lines define a basketball court which will make it very hard to auto detect.

Let's have a closer look at a few strategies. 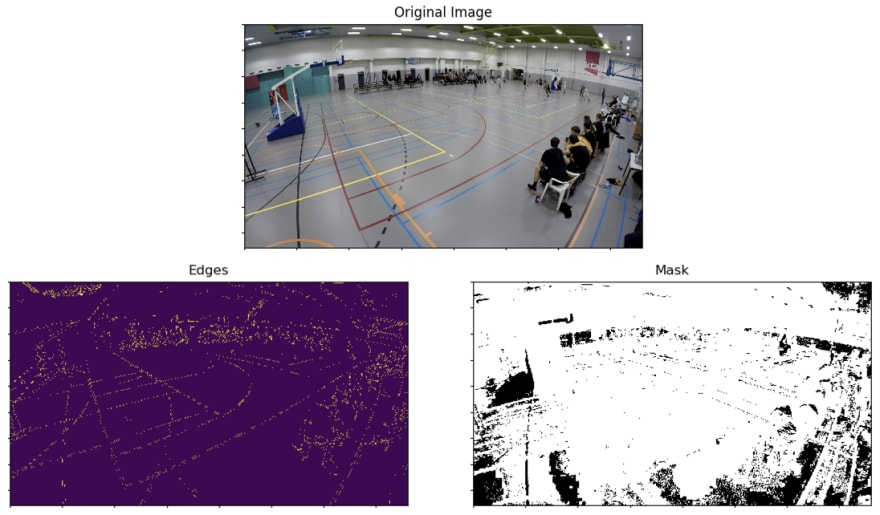 The Python code "court_detection1.py" is included in this project.

Basketball court detection (with too many lines) will be very difficult to identify using above strategies.

An auto encoder for sports field segmentation will be required as explained in the Classification of Actions by Simone Francia (see section 3.2.2 : Auto encoder model of the basketball court)

In order for training to work, a 100,000-frame dataset of basketball courts is required.
To do this, about 1000 frames needs to be extracted from each game which is then used for the creation of the data set.
The size of the dataset can be increased through simple data augmentation techniques. 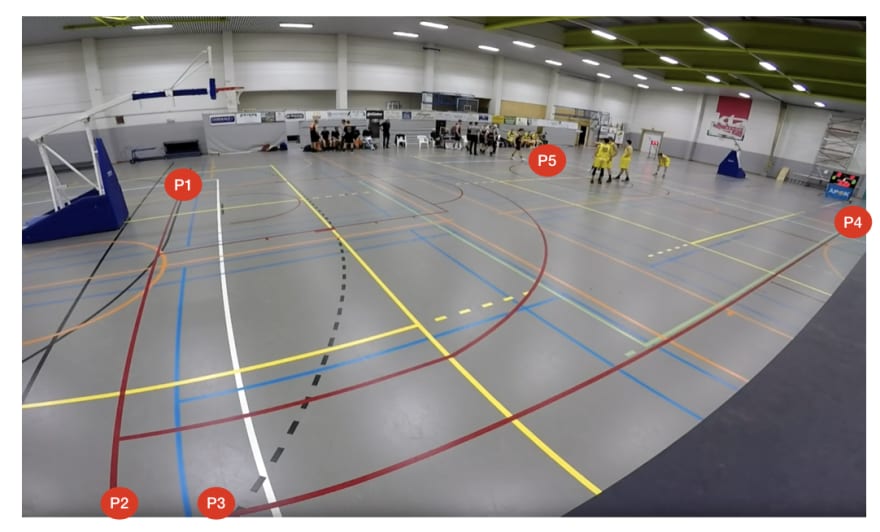 Through the OpenCV function cv2.polylines it is possible to create n points {p1, p2, .., pn } on the image plane. These points are then used to draw a polygon.

This polygon, annotated by manually, is interpreted as a field (basketball court) and colored white inside, while the outside will be black. 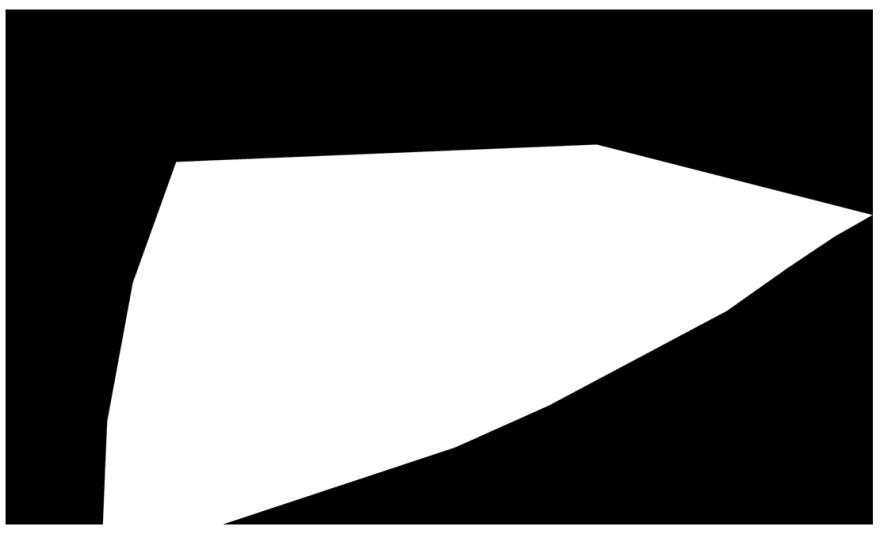 Data Augmentation for the Dataset Field

The annotation of the field has been carried out for one frame every second, and being the videos of 25 fps, it is equivalent to annotating a frame every 25. The annotation of 1000 frames is not sufficient to create a robust auto-coder model; for this reason, some Data Augmentation solutions have been adopted in order to provide the autoencoder model with a sufficient number of examples for training.

Every court image can also be rotated with an angle ranging from -15 and 15. From each original court image two other combinations are created, choosing a random angle between the interval.

Object detection locates the presence of an object in an image and draws a bounding box around that object, in our case this would be a person.

You can find a working example by Arun Ponnusamy using Yolo and OpenCV. The result image is shown below. 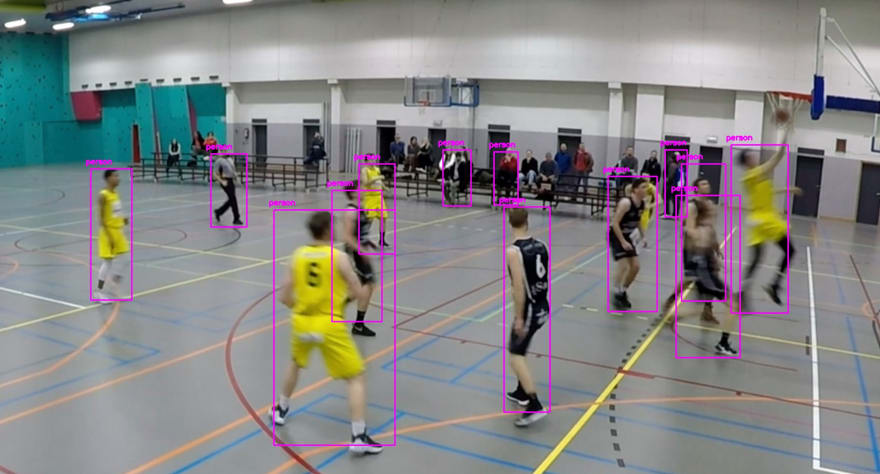 Another approach is using Convolutional Neural Networks like TensorFlow. More details on the different model architectures can be found in A 2019 Guide to Object Detection.

Mask R-CCN allows us to segment the foreground object from the background as shown in this Mask R-CNN example and the image below. This will help in the next model where we'll detect a player and based on color classification link them to a team.

Excerpt from Learning to Track and Identify Players from Broadcast Sports Videos [4].

In order to reduce the number of false positive detections, we use the fact that players of the same team wear
jerseys whose colors are different from the spectators, referees, and the other team. Specifically, we train a
logistic regression classifier [32] that maps image patches to team labels (Team A, Team B, and other), where image patches are represented by RGB color histograms. We can then filter out false positive detections (spectators and referees) and, at the same time, group detections into their respective teams. Notice that it is possible to add color features to the DPM detector and train a player detector for a specific team [33]. However, [33] requires a larger labeled training data, while the proposed method only needs a handful examples.
After performing this step, we significantly boost precision to 97% while retaining a recall level of 74%. 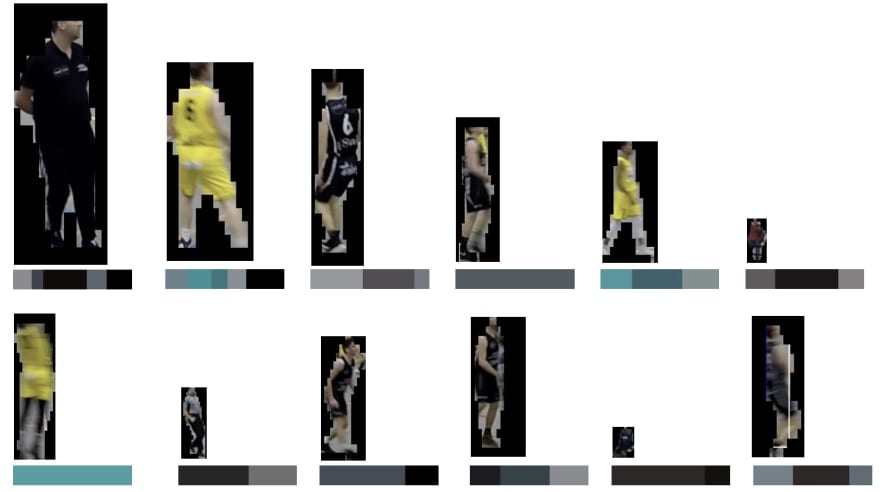 The Mask R-CNN application allows us to extract the segmented image of each identified person. Extracting the dominate colors per segmented image should allow us to classify the players by team. However for some unknown reason the used python code to accomplish this doesn't identify the yellow jersey color (yet).

Excerpt from Learning to Track and Identify Players from Broadcast Sports Videos [4].

Face recognition is infeasible in this domain, because image resolution is too low even for human to identify
players. Recognising jersey numbers is possible, but still very challenging. We tried to use image thresholding to
detect candidate regions of numbers, and run an OCR to recognise them. However, we got very poor results because image thresholding cannot reliably detect numbers, and the off-the-shelf OCR is unable to recognise numbers on deformed jerseys. Frequent pose and orientation changes of players further complicate the
problem, because frontal views of faces or numbers are very rare from a single camera view. We adopt a different approach, ignoring face and number recognition, and instead focusing on identification of players as entities. We extract several visual features from the entire body of players. These features can be faces, numbers on the jersey, skin or hair colors. By combining all these weak features together into a novel Conditional Random Field (CRF), the system is able to automatically identify sports players, even in video frames taken from a single pan-tilt-zoom camera.

The open source Alpha Pose project can detect a human body within an image and provide a full description of a human pose.

Once we can identify a body pose the direction can be calculated and these can be mapped onto a 2D playing plane/field/court as shown above.

How can we map a player in a video onto a 2D court? 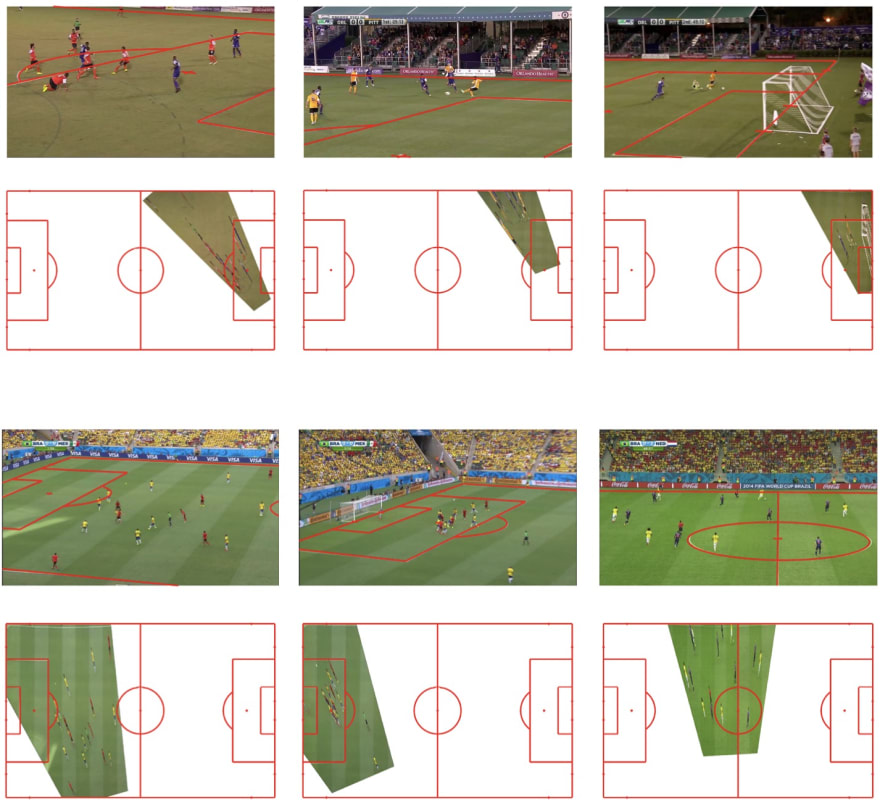 A Python example on how to use the OpenCV Homography algorithm can be seen below. This is based an article by Satya Mallick.

In a future version of the project we could also consider adding Start of Game (SoC), Track Ball and Goal (score) machine learning models.

If we want to solution to automatically analyse a video we could also considering adding a Start of Game (SoC) model. This identifies the players at a certain position on the court which will flag the beginning of a game or quarter when doing basketball analysis.

Tracking the ball will be a requirement when we want to achieve scoring analytics. Some very interesting research studies have been published on this subject : A deep learning ball tracking system in soccer videos [5]

An example of tracking a large ball using OpenCV can be found here. 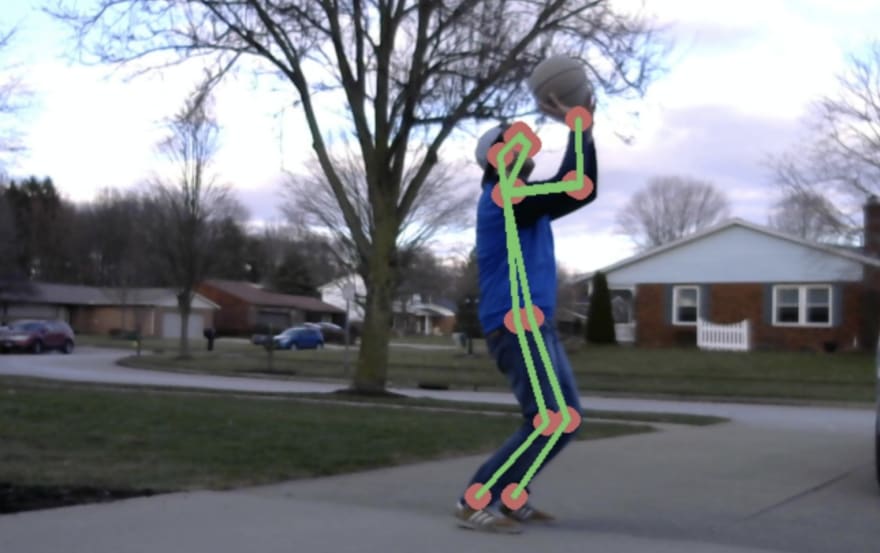 Alpha Pose is the “first real-time multi-person system to jointly detect human body, hand, and facial key points (in total 130 key points) on single images,”. The solution is capable of taking in an image and detecting key points (eyes, nose, various joints, etc.) on all human figures in the image. This allows the full description of a human pose in an image.

A must read related document is Sports Analytics With Computer Vision [7].

And another great article giving an overview on the available human pose estimation solutions.

Another very interesting machine learning model that we can use is the open source project on basketball shot detection and analysis shared by Rembert Daems (Thanks for the info).

Simone Francia developed a basketball action recognition dataset as shown in the video below. I've contacted Simone to get more details how his dataset can be used.

Eventually we also want to have a model which can identify when a player makes a goal (in basketball this can be a free throw which is one point, two or three points). As confirmed by the ML6 presentation, different Goal modals will need to be combined. For example audio peaks could be an indication that a goal was made, of course ball tracking towards to hoop and "entering" the "ring" are all events which could identify a goal.

Another idea (when possible) is to do OCR of the score board and see when the score increases as a confirmation of a goal. Of course the majority of the home made videos do not include the score board.

Further research is required and suggestions are always welcome.

Once we have the different models working we'll most likely need to "stack" them. Basically using the output from one model as the input for another one. Or combine similar models to obtain a better predictive performance.

One technique of ensemble learning is stacking.

Stacking is a way to ensemble multiple classifications. The point of stacking is to explore a space of different models for the same problem. The idea is that you can attack a learning problem with different types of models which are capable to learn some part of the problem, but not the whole space of the problem. So, you can build multiple different learners and you use them to build an intermediate prediction, one prediction for each learned model. Then you add a new model which learns from the intermediate predictions the same target.

This final model is said to be stacked on the top of the others, hence the name. Thus, you might improve your overall performance, and often you end up with a model which is better than any individual intermediate model.

Over the past 7 years I've recorded my son's basketball games and these are available on YouTube. We have thousands of hours of training data which we can use to test and train our machine learning models! 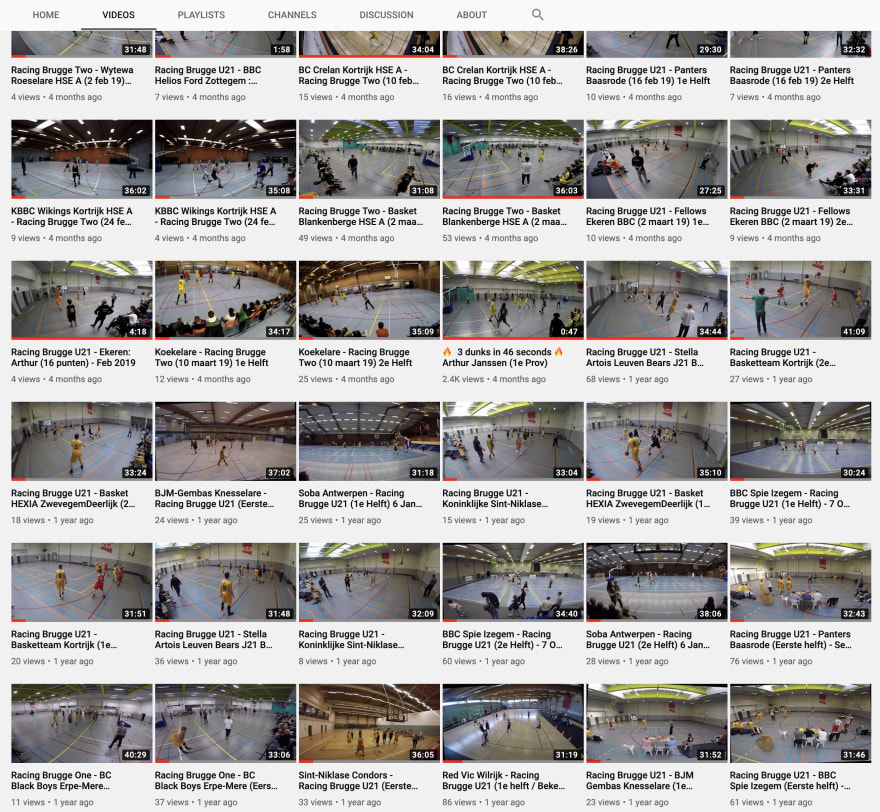 Machine Learning Hardware (on a budget) 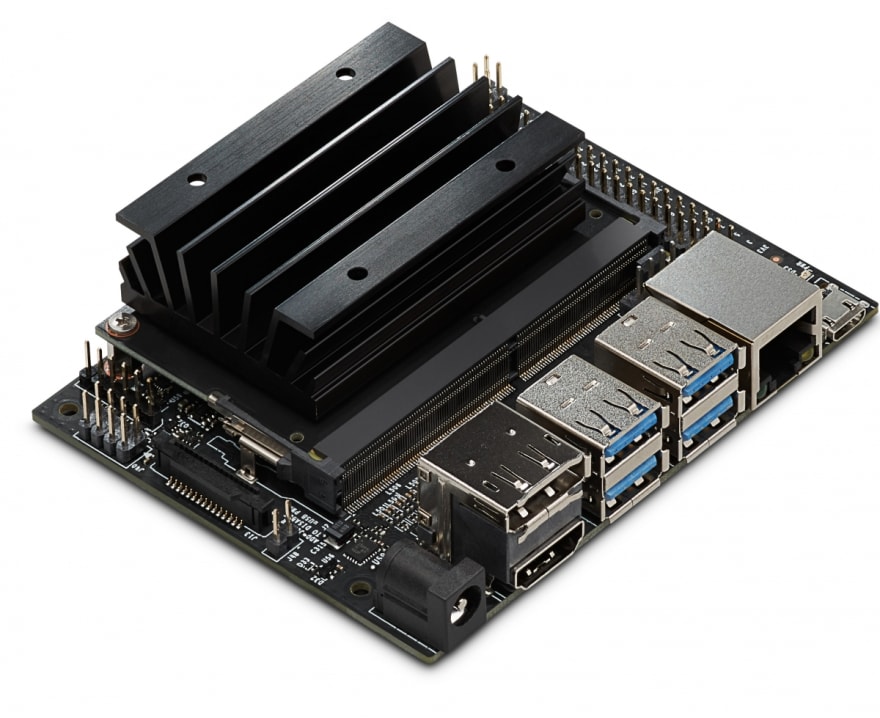 This NVIDIA Jetson Nano board could be an interesting and in-expensive solution to train and deploy the Sports Analytics machine learning software.

According to NVIDIA this is a small, powerful computer that let us run multiple neural networks in parallel for applications like "image classification, object detection, segmentation, and speech processing."

Once it comes to the architecture we're back on solid ground and have enough experience to make something beautiful.

The machine learning models can get integrated using an architecture explained by ML6 at Devoxx Belgium 2019 [3].

As you can see the architecture is based on Google Cloud but I'm convinced this architecture can most likely also be accomplished using Amazon, IBM or even Microsoft cloud services.

As explained in [3] some models will only need one video frame others will need multiple frames sorted by a timestamp (time-series) to analyse for example player movement.

A possible approach could be accomplished as follows:

Open Source, my experience till now.

Have you ever wondered how YouTube, Netflix shows you video/movie recommendations?