This is not an article that explains the "ideal" way to implement DDD in Golang because the author is no way an expert on it. This article is rather the author's understanding of DDD based on his research. The author
will be very grateful to contributions on how to improve this article.

Why DDD?
The following are the reasons to consider using DDD:

The idea of Domain-Driven Design was inverted by Eric Evans. He wrote about it in a book which you can find some of the highlights here 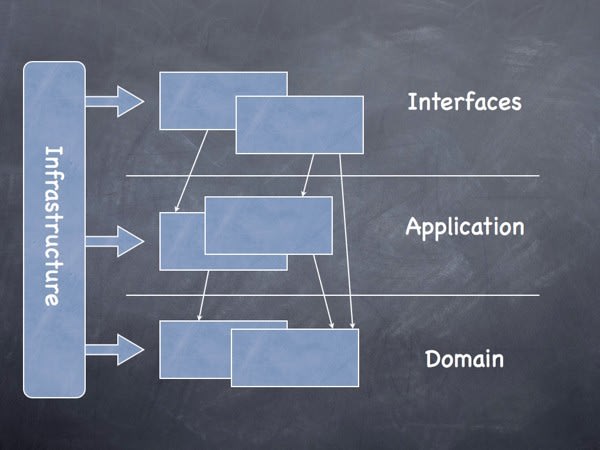 To have a thorough definition of terms of each layer, please refer to this

We are going to build a food recommendation API.

You can get the code if you don't have all the time to read.
Get the API code here.
Get the Frontend code here.

The very first thing to do is to initialize the dependency management. We will be using go.mod. From the root directory(path: food-app/), initialize go.mod:

This is how the project is going to be organized: 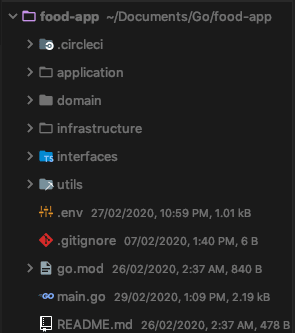 In this application, we will use postgres and redis databases to persist data. We will define a .env file that has connection information.
The .env file looks like this:

This file should be located in the root directory(path: food-app/)

We will consider the domain first.
The domain has several patterns. Some of which are:
Entity, Value, Repository, Service, and so on. 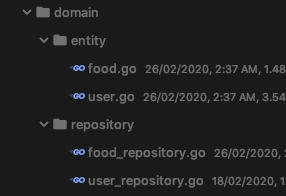 Since the application we are building here is a simple one, we consider just two domain patterns: entity and repository.

This is where we define the "Schema" of things.
For example, we can define a user's struct. See the entity as the blueprint to the domain.

From the above file, the user's struct is defined that contains the user information, we also added helper functions that will validate and sanitize inputs. A Hash method is called that helps hash password. That is defined in the utils directory.
Gorm is used as the ORM of choice.

The same approach is taken when defining the food entity. You can look up the repo.

The repository defines a collection of methods that the infrastructure implements. This gives a vivid picture of the number of methods that interact with a given database or a third-party API.

The methods are defined in an interface. These methods will later be implemented in the infrastructure layer.

Almost the same applies to the food repository here.

This layer implements the methods defined in the repository. The methods interact with the database or a third-party API. This article will only consider database interaction. 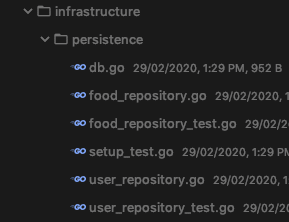 We can see how the user's repository implementation looks like:

Well, you can see that we implemented the methods that were defined in the repository. This was made possible using the UserRepo struct which implements the UserRepository interface, as seen in this line:

You can check the repository on how the food repository was implemented here.

So, let's configure our database by creating the db.go file with the content:

From the above file, we defined the Repositories struct which holds all the repositories in the application. We have the user and the food repositories. The Repositories also have a db instance, which is passed to the "constructors" of user and food(that is, NewUserRepository and NewFoodRepository).

We have successfully defined the API business logic in our domain. The application connects the domain and the interfaces layers.

We will only consider the user's application. You can check out that of the food in the repo.

This is the user's application:

The above have methods to save and retrieve user data. The UserApp struct has the UserRepository interface, which made it possible to call the user repository methods.

Before we define the interfaces layer, let us first define some "helper" packages that will be used in it.
This is how the utils will look: 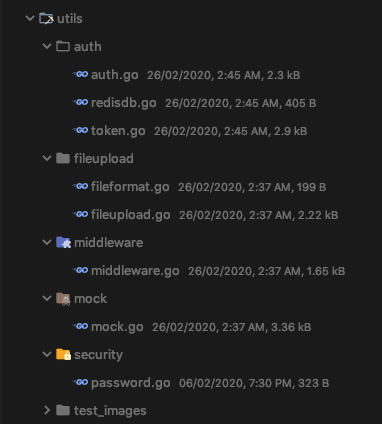 You can see that we have some helper functions that are used for authentication, file upload, middleware, and security. We will look at them below:

We will be using JWT for authentication. Since this article is not about JWT, I will summarise the key points about how we implemented authentication.

The authentication flow is as follows:

So let's see the three files that contain detailed information about what has been said thus far.


This file(auth.go) defines helper functions that save, retrieve and delete JWT metadata from redis.

Defining the next file(token.go) that contains information about token creation, extraction, and validation.

As seen, the file is self-explanatory as it is well commented.

We defined some helper functions for hashing and verifying passwords.

When creating food, an image is also uploaded. The handling of the image uploaded is done in the fileupload package inside the utils directory. Uploaded images are saved in Digital Ocean Spaces You can check it out in the repository here.

The interfaces is the layer that handles HTTP requests and responses. This is where we get incoming requests for authentication, user-related stuff, and food-related stuff. 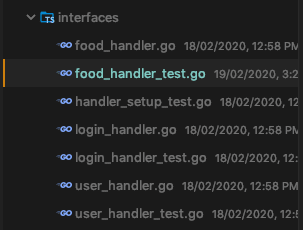 We define methods for saving a user, getting all users and getting a particular user. These are found in the user_handler.go file.

I want you to observe that when returning the user, we only return a public user(which is defined in the entity). The public user does not have sensitive user details such as email and password.

The login_handler takes care of login, logout and refresh token methods. We will be using some of the helper methods we defined in the utils/auth directory here. Such as CreateToken, CreateAuth, and so on.

In the food_handler.go file, we have methods for basic food crud: creating, reading, updating, and deleting food. The file has explanations of how the code works.

Please note, when testing creating or updating food methods via the API using postman, use form-data not JSON. This is because the request type is multipart/form-data.

So, let's test what we've got. We will wire up the routes, connect to the database and start the application.

These will be done in the main.go file defined in the directory root.

The router(r) is of type Engine from the gin package we are using.

As seen from the above file, Some routes have restrictions. The AuthMiddleware restricts access to an unauthenticated user. The CORSMiddleware enables data transfer from different domains. This is useful because VueJS is used for the frontend of this application and it points to a different domain.
The MaxSizeAllowed middleware stops any file with size above the one the middleware specifies. Since the food implementation requires file upload, the middleware stops files greater than the specified to be read into memory. This helps to prevent hackers from uploading an unreasonable huge file and slowing down the application. The middleware package is defined in the utils directory.

We can now run the application using:

I hope you didn't have a hard time following this guideline on how to use DDD in when building a golang application. If you have questions or any observations, please don't hesitate to use the comment section. As said early, the author is not an expert on this. He simply wrote this article based on his use case.
Get the API code here.
Get the Frontend code here.
You can also visit the application url and play with it.

Check out other articles on medium here.