As a "toy" I decided to try and revive an old version of Microsoft's Azure Pipelines Agent on an image from before they made that Azure Services Only. However, I updated the agent on the ubuntu-16.04-tfs-2018-u2 image to a later version of the linux agent. (2.140.2)

I had to also update the Team Explorer Everywhere (TEE/TEE-cli) that was embedded in that to the latest version. And upgrade java to version 11. But once that was done, it works well. Its a tad on the large size for an image. (1gb), but it seems ok on its memory and CPU usage. See the kubebox graph at the bottom. 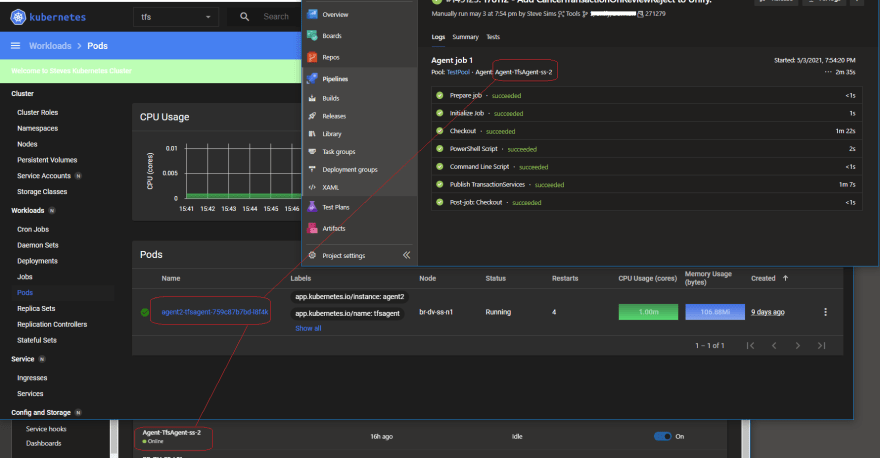 Does anyone think this could be more than just a toy ? I'm a novice at most Kubernetes stuff compared to the folks here, but I wanted to share this.

Once suspended, stevesims2 will not be able to comment or publish posts until their suspension is removed.

Once unsuspended, stevesims2 will be able to comment and publish posts again.

Once unpublished, all posts by stevesims2 will become hidden and only accessible to themselves.

If stevesims2 is not suspended, they can still re-publish their posts from their dashboard.

Once unpublished, this post will become invisible to the public and only accessible to SteveSims2.

Thanks for keeping DEV Community safe. Here is what you can do to flag stevesims2:

Unflagging stevesims2 will restore default visibility to their posts.