I've previously written about the Python library pfun that allows you to write Python code in a purely functional style by providing a functional effect system. Simply put, the pfun effect system works by representing side-effects as a recursive data-structure that can then be interpreted at the edge of your program to produce real effects, very much inspired by how effects are managed in Haskell or the purely functional ZIO Scala library.

In this post, we'll study how such an effect system can be implemented in Python, how it impacts performance of Python programs, and why the pfun effect system has particularly good performance. We wont spend any time on why you would want to manage side-effects with an effect system. If you want to read more about that, check out one of my previous posts.

The first effect that comes to mind when thinking about console interaction is printing. Let's define a type that represents console printing:

Notice that PrintLine has a field rest that allows you to compose it with other console effects. When a PrintLine is interpreted, it prints something to the console and continues interpretation of the composed console effect.

Next, let's handle reading from the console:

Similarly to PrintLine, ReadLine has a callable field rest that allows you to continue the effect interpretation with the result of reading from the console.

Finally, we need a way to terminate a console program. Lets define a leaf type that just wraps a value, but doesn't continue interpretation recursively:

We can use our model of console interaction to build data-structures that express sequences of operations that interacts with the console:

program on its own is simply a Python value. During its definition, no side-effects are actually carried out. In fact, nothing really happens until program.interpret() is invoked, at which point all the effects represented by program are carried out sequentially.

But what's worse is that interpreting PrintLine and ReadLine instances requires recursively interpreting its sub effects. Since this recursive call is in tail position in both cases, it could in theory be tail-call-optimized away, but alas Python famously doesn't perform tail-call-optimization. This means that a sufficiently deep data-structure will eventually overflow the Python stack.

The solution to this problem is to use another data-structure called a trampoline that can interpret the recursive function calls in constant stack space:

With this in hand we can re-write our Console effect system as follows:

Notice how all the implementations of interpret returns immediately, instead of directly performing a recursive call. This allows us to interpret Console values of arbitrary depth without running into RecursionError.

Unfortunately, this solution makes the performance of our Console effect system even worse, since now we've also added the overhead of interpreting the trampoline data-structure.

The effect system in pfun is conceptually similar to the Console effect system we've built here (although it can do much, much more than interacting with the console). To compose effects in the pfun effect system, we use a function called and_then which takes as an argument a callback function from the result of an effect to a new effect. for example:

read_foo.and_then(...) produces a new effect that is similar in concept to PrintLine and ReadLine in that, when interpreted, it will first interpret read_foo, pass the result to the callback function, and then interpret the effect returned by that callback.

Interpreting deep effect data-structures produced by long sequences of calls to and_then would lead to RecursionError just as with our initial version of the Console effect system, were it not for the fact that the pfun effect system also uses a trampolining mechanism in its own interpreter. Unfortunately, running this trampolined interpreter in Python is pretty slow because it involves looping over Python values and calling Python functions, both of which are not terribly fast.

Luckily, Python integrates nicely with C code through a feature called extension types. Running an interpreter for an effect system in C is much, much faster than running it in Python.

In pfun 0.12.0 the interpreter for the effect system was completely re-written as a Python C extension. Lets do some benchmarking to see how big a difference this actually makes in terms of performance. We'll use the performance of the the Scala library ZIO as a baseline, as the pfun effect system draws most of its inspiration from there. ZIO has a fairly extensive benchmarking suite. The most obvious benchmark for testing raw interpreter speed, without any parallelism, is called deepLeftBind (bind is the canonical name for the and_then operation, also called flatMap in Scala):

The equivalent in the pfun effect system looks like this:

Each benchmark is executed 100 times in a loop in a single Python interpreter and Scala REPL respectively, measuring execution time in milliseconds each time. For the ZIO version, 5 warmup executions are also performed before the actual benchmarking loop to prevent time used for JVM class loading etc. to influence to the outcome.

Below I've plotted the mean execution time in milliseconds over the 100 executions for three benchmarks: 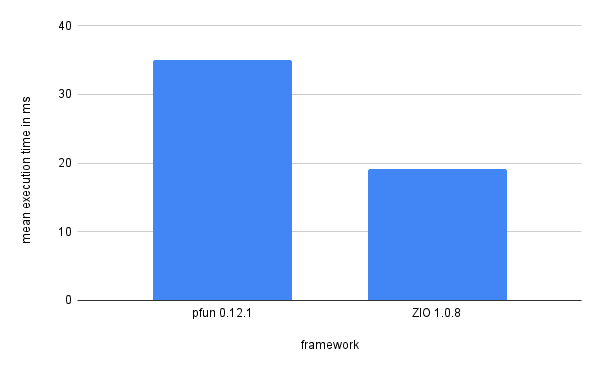 It's not surprising that there's still some room for improvement in the performance of pfun compared to ZIO, as a lot of work has gone into optimizing the ZIO interpreter. Maybe pfun will never catch up to the performance of ZIO as some of the overhead of the pfun implementation is fundamental to having a Python interface: In order to work with pfun from the Python side, pfun must accept Python callback functions. Jumping back and forth between Python and C during effect interpretation introduces overhead that will be difficult to get rid of, while still keeping the pfun api ergonomical. That being said, the current C implementation of the pfun effect system is only the first version, so there is almost without a doubt room for further optimization of the interpreter itself.

To learn more about pfun, check out the documentation or head over to the github repository.

Have you ever made an app?

7 VSCode Extensions to Boost Your Performance as an Angular Developer

Once suspended, suned will not be able to comment or publish posts until their suspension is removed.

Once unsuspended, suned will be able to comment and publish posts again.

Once unpublished, all posts by suned will become hidden and only accessible to themselves.

If suned is not suspended, they can still re-publish their posts from their dashboard.

Once unpublished, this post will become invisible to the public and only accessible to Sune Debel.

Thanks for keeping DEV Community 👩‍💻👨‍💻 safe. Here is what you can do to flag suned:

Unflagging suned will restore default visibility to their posts.