There seems to be a lot of misinformation on when OAuth 2.0 (henceforth referred to as OAuth) is appropriate for use. A lot of developers confuse OAuth with web session management and hence end up using the wrong protocol/set of technologies. This, in turn, leads to security issues. This article will clarify when to use regular session management solutions and when to use any one of the OAuth flows.

The most important difference

Ideally, we would like all authenticated communication to be long-lived (to provide the best user experience). The difference between user session management and OAuth is the level of trust between the communicating parties.

While using user sessions, it is assumed that one of the two communicating parties is untrusted (your app’s frontend) and the other party is trusted (your app’s backend). In OAuth flows, generally, the two communicating parties are both trusted (i.e. your app’s backend and third-party app’s backend). In some OAuth flows, one of the two parties is also untrusted, in which case, it would require a handshake that is ‘short-lived’. We will talk more about “trusted parties” in the next section.

As a result, session management generally refers to communication between your own app’s backend and frontend. Whereas, OAuth is used when your app (frontend or backend) needs to communicate with a third party’s backend – if you use Google/Facebook Sign in for your app or if your app uses Okta/Auth0 for managing users. 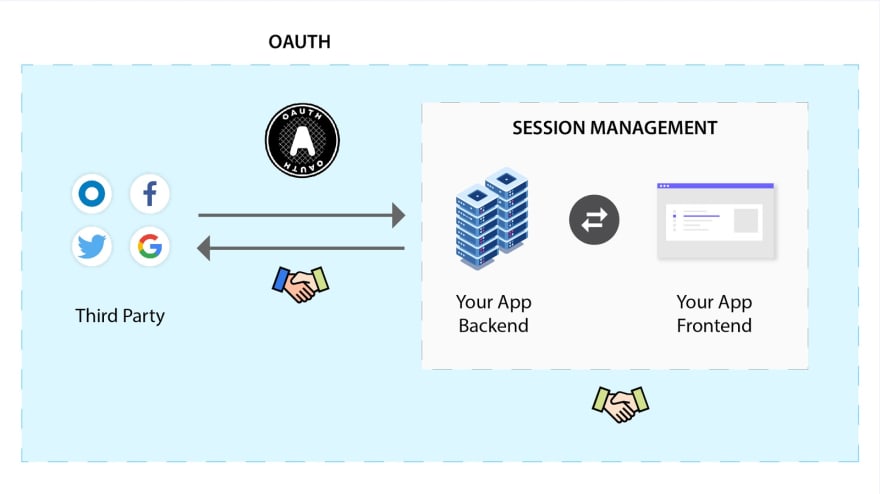 If a frontend is compromised, then the attacker may have an easy way to “harm” the app or its users. Hence, it is advisable that no data being sent from the frontend be blindly trusted. We must always verify and sanitize the incoming data, and try to minimise risk as far as possible.

In order to show this dependency, let’s examine the different ways two apps can communicate with each other using the Authorisation code grant flow[2]. The setup is that we have two apps: “YourApp” and “OtherApp”.

YourApp has the following components:

OtherApp has the following components: 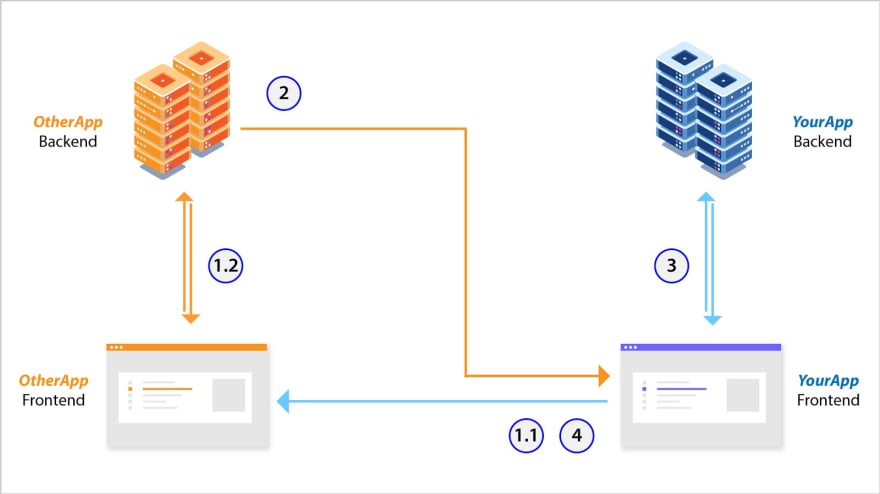 One way of doing this is to simply use session management between your frontend and backend. Another method, if you are using an external identity management solution like Okta or Auth0, is: 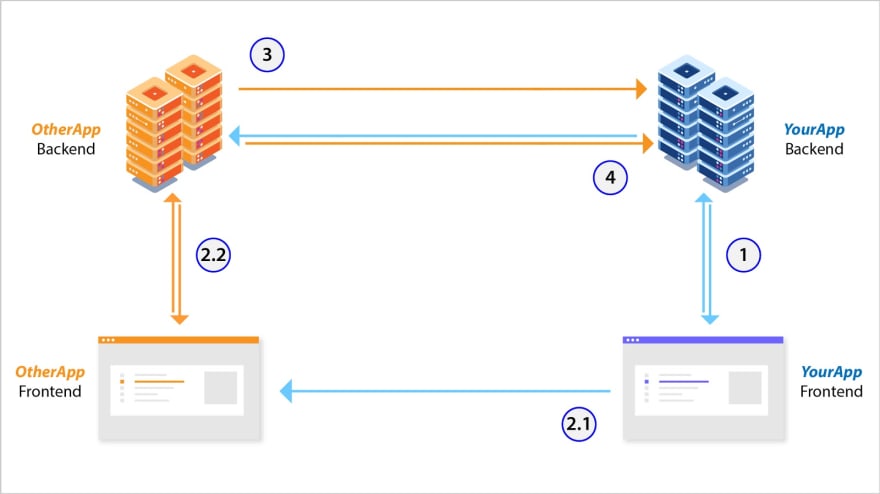 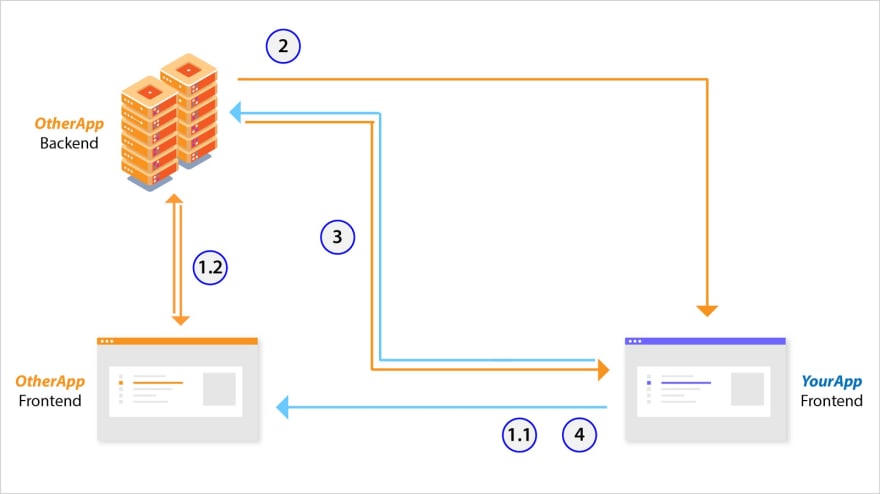 We can see that regardless of how two apps want to communicate with each other, there is always a need for session management.

There are numerous methods to implementing session management. Some are easier to implement, but are also less secure. Just like in OAuth, here too, the concept of short lived access and long lived refresh tokens can come into play. However, unlike OAuth, the refresh token can be sent and stored on the frontend as long as it is “one time use” (a.k.a rotating refresh tokens). Any other session flow is less secure as per the analysis in this blog post.

A final difference is that OAuth and session management may use different types of tokens. In OAuth, if the access token issued by the OtherApp is used for communication between YourApp’s frontend and backend, then this token must be a JWT. This is so that YourApp’s backend can verify this token without having to call OtherApp’s backend. In fact, JWT was invented to fulfill this exact need.

In session management, the access token can be Opaque (a long, random string) or a JWT. There are pros and cons of using either of them as explained in this blog post.

If you liked this blog, you may also like other blogs from us:

Written by the Folks at SuperTokens — hope you enjoyed!

[1]: Backend data breaches and insider threats do occur. However, these events are much more “controllable” by app developers than, for example, malware on the end user’s computer.

[2]: When describing the flows, we will not mention the authorisation code step via client secret or PKCE for brevity.

[3]: The backend only issues an access token since that is short-lived and it cannot trust the frontend to securely store a non-changing long-lived token (refresh token).

📦 Everything you need to know: package managers

Once suspended, supertokens will not be able to comment or publish posts until their suspension is removed.

Once unsuspended, supertokens will be able to comment and publish posts again.

Once unpublished, all posts by supertokens will become hidden and only accessible to themselves.

If supertokens is not suspended, they can still re-publish their posts from their dashboard.

Once unpublished, this post will become invisible to the public and only accessible to SuperTokens.

Thanks for keeping DEV Community 👩‍💻👨‍💻 safe. Here is what you can do to flag supertokens:

Unflagging supertokens will restore default visibility to their posts.