Note: This post doesn't portray that this is the only way to structure the code. There are many other great ways to do it. In fact, this method might have already been followed by most of you. This post also considers that you have some background knowledge about React and its ecosystem, also some common terminologies used in the web community

This is a two-part series, the next part will be posted soon.

Although the title says React code but this method can be applied across other front-end stacks too. I have used this method to build a Vue application too and it worked like a charm for me. I used React for this post because that's where I started for the first time.

How this will help?

Also, by following this way of code structuring, you would be able to avoid a lot of merge conflicts. Adding new features would be a cakewalk for any web-dev on your team. Also if you want to extract some code out to create a library out of it, you can do that too in very less time.

More in detail in the next part of this post series.

Why not use already built boilerplates?

We did start with cloning the best boilerplates out there but eventually had to tweak them accordingly to fit into our team's vision. So we ended up deleting a lot of code from that boilerplate code. The most common problem we faced while using some boilerplate code is to dump all the unnecessary code and configuration that isn't needed and while doing that, most of the time the code breaks, so we had to fix all the problems instead of building new features.

So we created our own boilerplate, just in case we need to kickstart a new front-end project in the future. I am saying that you should also stop using boilerplates created by well-known devs but this is just our strong opinion about what we want in our day-to-day coding sessions.

Creating your own boilerplate can also help you incrementally add libraries that you might later need while writing your production code. We like to keep our boilerplate code as lean(fewer libraries from the start) as possible because we don't want our bundle size to be high from the onset of our project.

First, let's use create-react-app to scaffold our react app. We all know what does it do(if not that read it here). I am using it because I don't want this post to be longer than 2 posts, not deviating from our main topic and I am very lethargic too(truth revealed).

So after executing following command in the terminal in your workspace

It creates a folder my-app with the following file structure, 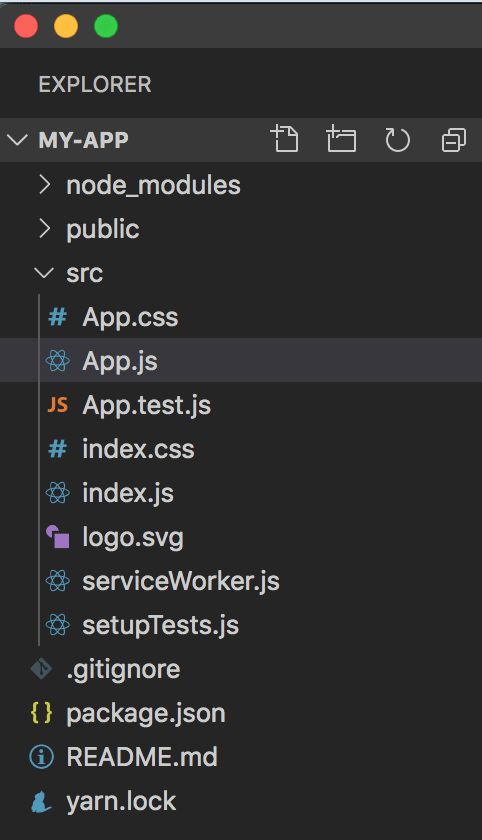 Listing each directory and its uses,

For the sake of this post, we will focus our attention on src directory.

Let's look at what files the src folder contains.

We can add all our Application code in our App Component file but it would give you nightmares later on. Also, we would want our SPA to have routes for our application to react to URL changes.

When the user first lands on our application, he/she sees the login screen first, after login we redirect our app to Dashboard where the user can navigate to Listing and Profile. Don't want to overdose you with what features each route will have. This post is already quite long for you and I don't want you to get bored.

Moving on, we will need some kind of routing logic for our routes. I am using react-router-dom for representational purposes. First I add it as a dependency using the command yarn add react-router-dom. Make sure it has been added to your package.json dependencies.

I don't like to keep the App component lingering around in the src folder like that, I will create a screens folder. I will come back to why I named it like that. Inside that screens folder, create another folder named App. Inside the App folder create a file named index.js, this we will use for exporting App code to whoever wants to consume it.

Now you create a components folder under src/screens/App folder. Move App.js, App.css and App.test.js files to recently created components folder. Now your file structure will look like this.

I will now export the App component from src/screens/App/index.js file.

I will now delete the entire jsx code from App component to make things easier for us. 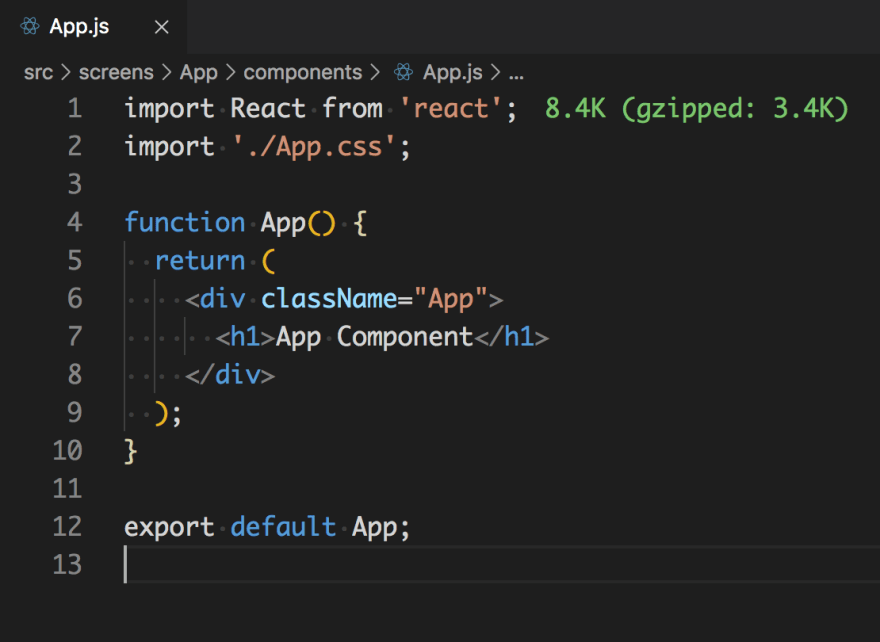 We will make file location changes for App component import in the src/index.js file. Also, removing the references to index.css and serviceWorker.js files which we don't need in our context. The src/index.js file looks like this.

Now if you save and look at the application, it will be just a white screen with text - App component written in the top center of the screen.

Now let's create another folder under src directory named shared. This directory will contain all the shared utilities, constants, components, and other stuff that needs to be shared with your entire Application code. Right now I am creating constants for our routes. 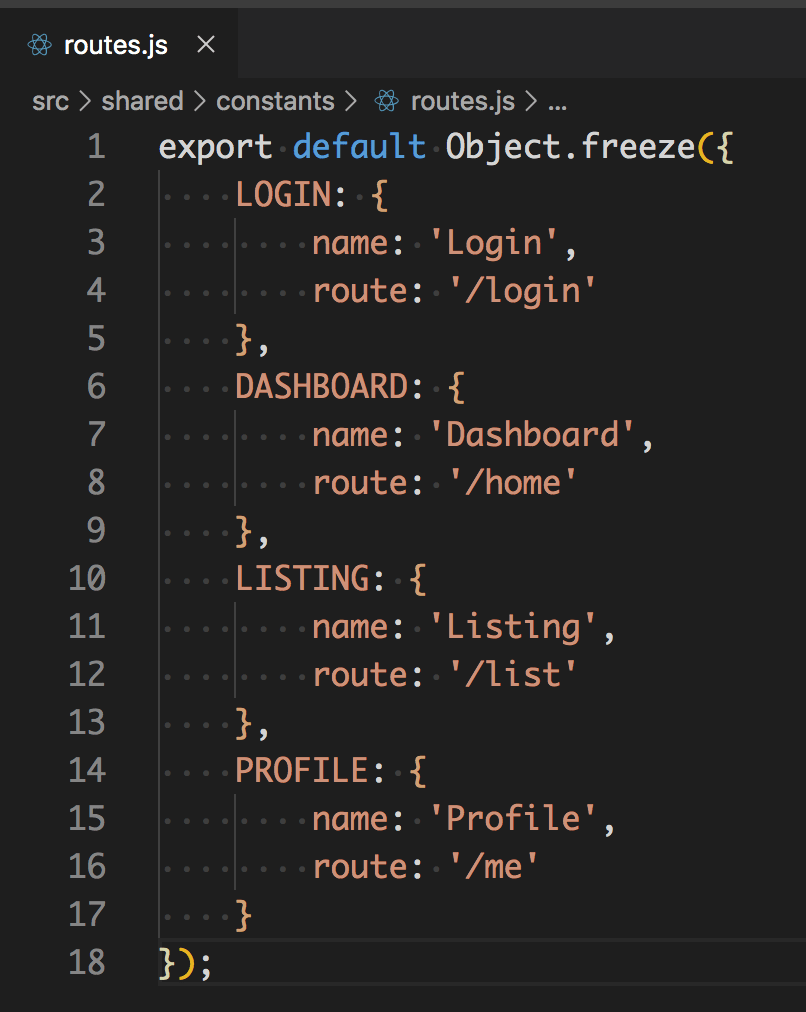 Now we go ahead and create route links in our App component. We import our constants and create some anchor tags to those routes.

Before we do that, we need to solve add a file .env at the root. Some of you must have seen a discrepancy in one of the changes I made above while editing src/index.js. I had referenced App component like this,

It's because I added the .env file at the root folder which helps us resolve modules in the src/ folder without having to reference files using ../../../ from deep inside the file directory. Create a file .env at the root and paste the following content in it and then restart our application using yarn start.

As a direct result of this, we can now reference shared constants(also any future shared utility) from anywhere our application like following,

After this, we import routeConstants into our App component and add 4 Link tags from the react-router-dom library just below the App title. I also added a bunch of other components required for our routes to work.

Although I dumped everything inside the App component here. In the next post, I will start distributing each route component code into its own separate space so that you get the gist how the final file structure actually works.

Suraj Jadhav
I've been a web-dev since last 7 years. Simply love the community. Will try to write about my learnings here.
How should we structure our React code? (2/2)
#javascript #react #productivity #beginners

Once suspended, surajjadhav will not be able to comment or publish posts until their suspension is removed.

Once unsuspended, surajjadhav will be able to comment and publish posts again.

Once unpublished, all posts by surajjadhav will become hidden and only accessible to themselves.

If surajjadhav is not suspended, they can still re-publish their posts from their dashboard.

Once unpublished, this post will become invisible to the public and only accessible to Suraj Jadhav.

Thanks for keeping DEV Community 👩‍💻👨‍💻 safe. Here is what you can do to flag surajjadhav:

Unflagging surajjadhav will restore default visibility to their posts.