In this post we will go through several configuration of Websockets. Let's say from zero infrastructure to quite complex cluster configurations.

Websocket is a wide spread protocol allowing full-duplex communication over TCP. There are several libraries implementing that protocol, one of the most robust and well-known is Socket.io on the Javascript side, which allows to quickly create real-time communication patterns.

Creating a single server in NodeJS where multiple clients can connect is fairly simple and straightforward using any example of the Socket.io library itself. 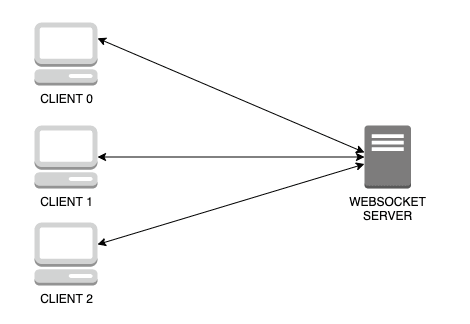 One of the main feature of the library is that it can wrap the websocket within an http server.
For example, a first approach can be that as soon as a client connects to the websocket, the server application logs the message and may wait for a specific topic on it:

The server after client connection will wait for messages of type testMsg.

The client is configured to employ native websockets, without attempting naïves solutions as http polling.

The server is also able to broadcast messages to all the clients connected to the websocket.

Tip: those messages will be received by ALL the clients connected.

The previous example was simple and fun. We can play with it effectively. But creating a scalable multiserver architecture is another story and is not as immediate as the previous case.

Luckily the two problems are not so difficult as they appear.

The first problem can be natively addressed by employing an Adapter. This Socket.io mechanism, which natively is in-memory, allows to pass messages between processes (servers) and to broadcast events to all clients.
The most suitable adapter for a multi-server scenario is socket.io-redis, leveraging the pub/sub paradigm of Redis.
As anticipated the configuration is simple and smooth, just a small piece of code is needed.

The second problem of keeping a session initialized by one client with the same origin server can be addressed without particular pain. The trick resides in creating sticky connections so that when a client connects to a specific server, it begins a session that is effectively bound to the same server.

This cannot be achieved directly but we should place something in front of the NodeJS server application.
This may typically be a Reverse Proxy, like NGINX, HAProxy, Apache Httpd. In case of HAProxy, imagining two replicas of the websocket server application, the configuration of the backend part would be:

To summarize what you should expect with this configuration:

Containerizing everything: a Docker Stack of Microservices

What we seen so far can be summarized in the following diagram:

The natural evolution is a bunch of microservices containerized as Docker images. Our previous scenario holds 3 building blocks that can be containerized:

For the first service I created a predefined multi-staged Docker image starting from the NodeJS native image in its alpine variant. The other two microservices will work with native images.
The 3 services can leverage docker-compose to be deployed. Their configuration can be the following:

The deploy part will only work in a Swarm stack deployment. Assuming that you have a Swarm up and ready, the deploy can be started with:

However the previous option (deploy) is not valid outside a Swarm, for example within a local development environment.

In this case you may use the docker-compose basic command. An extra replica of the websocket server application may be manually added.

Tip: another elegant way to achieve that is by using docker-compose up -d --scale socket-server=2 socket-server

Now to bring everything up is sufficient to execute:

Tip: when using HAProxy remember to define the correct hostnames of the endpoints involved in the configuration file.

Tip: After introducing a Reverse Proxy remember to tune the endpoint hostname and port which the client will attempt to connect to.

Orchestrating more and more: a Kubernetes cluster in action

So far, we have already addressed our problems for a multi-server case. We also achieved a containerized stack of microservices in Docker.
Now we are able to add a further step, we can orchestrate all the microservices transforming them in Kubernetes (K8s) resources and running in a cluster.

The shift from Docker is really easy. First of all we can drop the Reverse Proxy service, we will see later why. Then we will transform each service into a pair of service and deployment. The service will be the interface for receiving requests, whereas the deployment will maintain a replica set of pods (if you don't know K8s terminology, imagine each pod as a container) running the application: in this case either the Websocket application or Redis.
Each request received by the service will be forwarded to the replica set defined by the deployment.

Supposing that you have a K8s cluster setup (I suggest K3s or Kind for development purpose), we will have:

The new architecture we will achieve can be summarized as follow:

As we seen before in this shift towards Kubernetes we skipped the Reverse Proxy part (HAProxy).
This is completely on purpose, because creating a Kubernetes Service enables directly such a form of proxing.

Although a Kubernetes Service can be exposed outside the cluster in many ways (NodePort, LoadBalancer, Ingress, check here), in this case I decided for a simple way. Indeed using NodePort allows to expose a specific port outside the cluster, where the clients will connect to.

The key point of the service is sessionAffinity: ClientIP which will mimic Sticky connection for the service.

Tip: In general Round Robin among Pods is not guaranteed using a simple solution like NodePort. In order to mimic Round Robin policy, this part of the previous configuration was employed:

The cluster can be established with simple kubectl commands:

Dealing with this new architecture will lead to slight changes to client:

Here is the new client configuration:

In this part we started from scratch and we landed in a fully clustered architecture. In a following chapter we will see of we can achieve an even more sophisticated solution.

Note: This part will correspond in the repository to the haproxy branch

How to use Puppeteer inside a Docker container