Writing my first module in Python was a confusing experience. As it usually happens, when I was testing it in the interactive Python REPL, the first version turned out to have some bugs (the second and third ones also did 😉).

That’s fine - I thought - I will just fix the module and reimport it.

But it turned out that calling from my_module import my_function didn’t update the code! my_function still had the bug that I just fixed! I double-checked if I modified the correct file, reimported it again and still nothing. It turns out, as StackOverflow kindly explained, that you can’t just reimport a module. If you already imported a module (import a_module) or a function (from a_module import a_function) in your Python session and you try to import it again, nothing will happen. It doesn’t matter if you use the standard Python REPL or IPython.

How does importing in Python work?

Turns out that, for efficiency reasons, when you import a module in an interactive Python session, Python interpreter does two steps:

Which means that, if you already imported the module (or imported a different module that references this one) and you try to import it again, Python will ignore this request. You can read more about how importing works in the documentation.

So, if I can’t reimport a module, does it mean that I have to restart Python each time? Not really, that would be very inconvenient.

How to reimport a module?

The easiest way is to quit your interactive session and start it again. It works fine if you don’t care about preserving the data that you already have in your session, like the functions that you wrote and the variables that you calculated. But usually you don’t want to restart the REPL, so there are better ways.

Since we know that the interpreter will first look for the module in the sys.modules dictionary, we can just delete our module from this dictionary. And it will work in most cases, but there are some caveats. If your module is referenced from another module, there is a chance that you still won’t be able to reimport it. So don’t do this. There is a better way.

The recommended solution is to use the importlib.reload function. This function is designed exactly for reimporting modules that have already been imported before. To reload your module, you need to run:

So that’s how you can reimport a module in Python. And if you are not using IPython, this is where your options end. But IPython users have some other interesting solutions to this problem.

If you don’t care about actually “importing” your module and all you need is to run some functions defined in a file, you can execute that file instead. It will run all the commands as if you would copy and paste them in your IPython session. You can rerun a file as many times as you want and it will always update all the functions. Running a file in IPython is extremely easy:

I cheated a bit when I said that this option is not available in standard Python REPL. It is, but it requires more typing:

To be honest, if I had to type all this, I might as well just use the importlib.reload instead.

All those options are great, but if you are as bad as me when it comes to writing code and you make a lot of mistakes, then it means a lot of reloading. And typing this importlib.reload / %run / exec... is annoying. Wouldn’t it be great if there was a way to automatically reload a module? Well, IPython can actually do that!

Another one of the magic methods in IPython is related to reloading modules. It’s called %autoreload. It’s not enabled by default, so you have to load it as an extension:

Now, you can turn on auto-reloading:

And each time you execute some code, IPython will reimport all the modules to make sure that you are using the latest possible versions.

There are 3 configuration options that you can set:

Great, any caveats? I found 3 minor ones:

Here is how %autoreload works in practice: 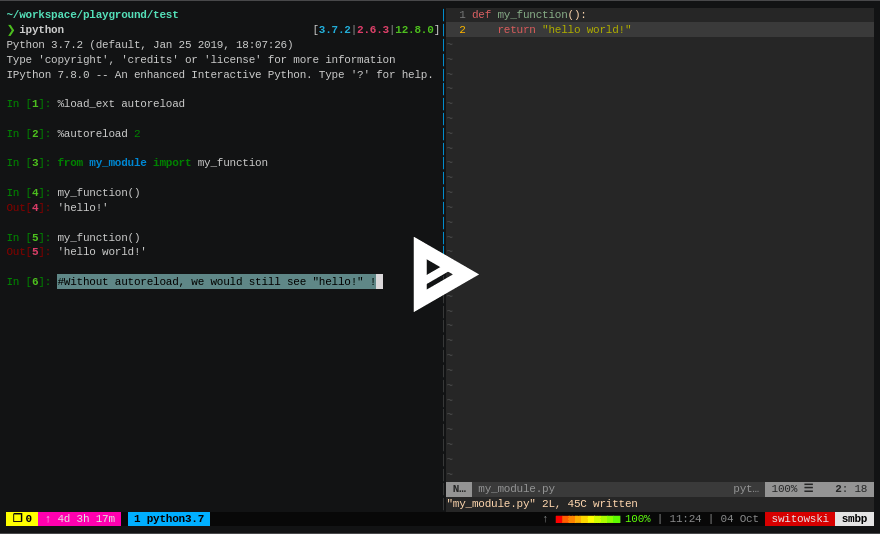 So if you don’t know %autoreload yet, give it a try the next time you will be working on a module in Python!

Better way to try...except...pass in Python

Develop a Keyword Research Tool in Minutes (Python and C#)

Once suspended, switowski will not be able to comment or publish posts until their suspension is removed.

Once unsuspended, switowski will be able to comment and publish posts again.

Once unpublished, all posts by switowski will become hidden and only accessible to themselves.

If switowski is not suspended, they can still re-publish their posts from their dashboard.

Once unpublished, this post will become invisible to the public and only accessible to Sebastian Witowski.

Thanks for keeping DEV Community safe. Here is what you can do to flag switowski:

Unflagging switowski will restore default visibility to their posts.