This is the fourth in a series of class notes as I go through the free Udacity Computer Networking Basics course.

What is IP Addressing?

Therefore the total number of IPv4 addresses is 2^32, about 4 billion. Although we are running out of them, for our purposes here we will learn how to deal with all these addresses. If we were to store and look up each address individually, this would be expensive and inefficient.

So we group IP addresses up.

Before 1994 we used "Classful" addressing, splitting IP addresses into "routing prefixes" (indicating class A B or C), "network ID" section and a "host ID" section:

There were only about 5000 Routing prefixes in Routing Tables back in 1992, but that accelerated in 1994 and it was clearly going to be unsustainable, and we began to run out of class C addresses, while still reserving entire chunks of IPv4 address space for unused A and B classes. 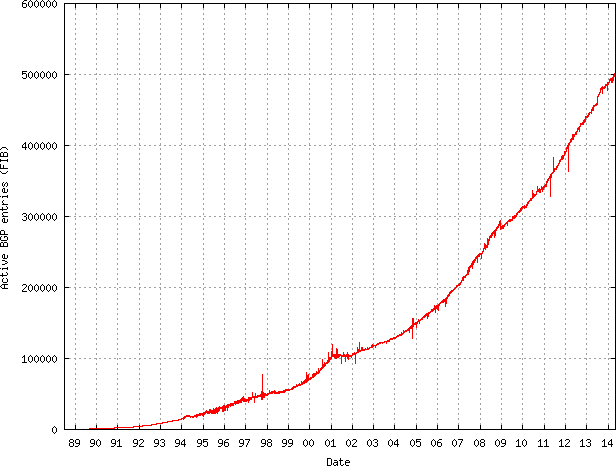 The classful strategy had failed to anticipate that demand would be huge for class C addresses and its inflexibility led us toward a new addressing protocol, CIDR. Instead of having fixed "network ID" and "host ID" portions of the 32 bits in IPv4, we would have an IP address with a "mask", indicating the length of the network ID.

So the "mask" is a variable length address prefix and independent of the range of IP addresses being used (whereas "classful addressing" basically fixed the address prefix lengths). This allows RIRs to allocate more flexibly according to size of the network.

CIDR was very successful in slowing the growth of routing tables to a linear rate from 1994 til the early 2000s. But from 2000 onward a new practice arose that made it difficult for upstream providers to aggregate IP prefixes together.

Multihoming is when an AS (typically with a /24 mask) wants to be reachable via two upstream ISPs.

So although CIDR aggregation was solving the growth in routing table size for a while, multihoming caused an explosion again because aggregation became less useful.

So CIDR requires LPM to look up the right prefix in a routing table efficiently, and LPM needs to search the space of all prefix lengths AND all prefixes of a given length. The other constraint is speed - an OC48 requires a 160 nanosecond lookup, or a max of 4 memory accesses.

Binary Tries are very speed inefficient, while Direct Tries or Exact Match strategies are space inefficient. We compromise by using "Multi-bit" or "Multi-ary" Tries. A k-ary Trie would then have Depth of W/K, Degree of 2^K, and Stride of K bits. Binary Tries are special cases of Multi-ary Tries where k=1, i.e. Depth is W, Degree is 2, and Stride is 1 bit. So we can control memory access by moving k to solve for the Depth that we want.

This is popular for small/home office networks and VPNs. However, the End to End principle of the internet architecture is broken to do this.

The other solution is IPv6. IPv6 not only adds a lot more bits for addresses, but clears up a lot of gunk in the header. Here's a comparison of the required fields: 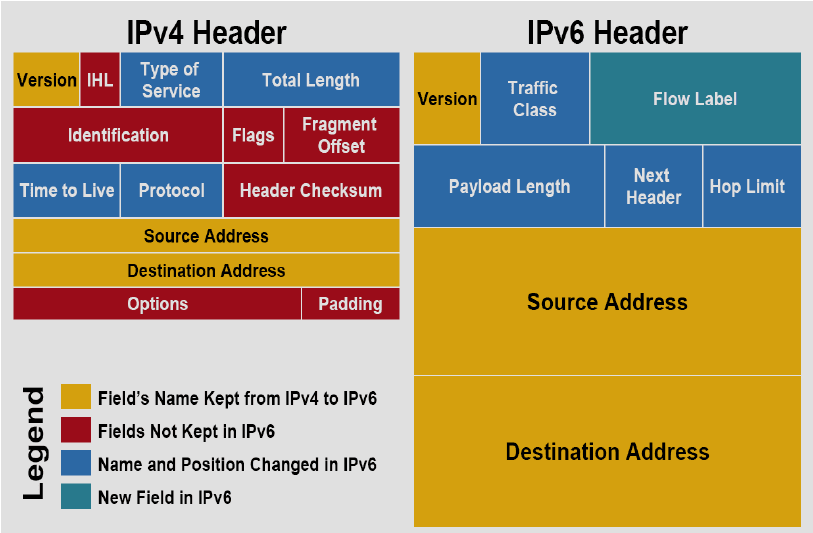 The benefits of IPv6:

However, we have only seen very slow adoption of IPv6 so far, because IPv6 is hard to deploy incrementally. Everything runs on IPv4, with a massive network effect both above and below the narrow waist. Adopters face significant incompatibility issues. So far, Incremental Deployment involves either Dual Stacking IPv4 and IPv6 or Translation/Tunneling (kind of the same thing but with a separate layer just for 6 to 4 tunneling).

Aside: How IP Address Allocation works

IP addresses are allocated to ISPs by a hierarchy:

This worked until 2011 when IANA gave out the last "/8" block. Also fun knowledge, the allocations across registries aren't even: 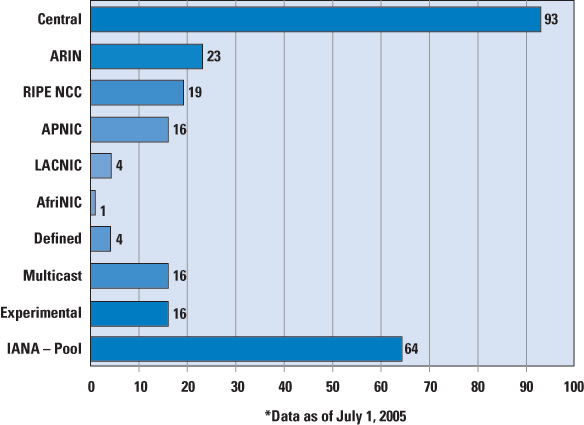 This is also a nice CIDR cheatsheet showing classful to classless translations as well as allocations in each address range and exceptions therein: https://oav.net/mirrors/cidr.html.

Hopefully this has been a good high level overview of IP addressing works and the problems we face today with IPv4. I am planning more primers and would love your feedback and questions on:

All you wanted to know about CORS