Not that this is the second part on how to setup ROS to work with WSL2 (Part I). However, the upcoming section would work in a full Linux setup as well.

There are several ways of using Unity for robotics. Robotics for Unity is a new field and support is still custom made. Most of the applications out there are proprietary software created by private companies and not easily accessible or configurable by others. ROS support has been recently introduced by Unity itself, and it is a fork from a previous library from Siemens' RosSharp. In my setup, I used the Unity ROS library which works with the latest ArticulationBody types.

For this demo project I have chosen a cute robotic manipulator which is open sourced: Reachy from Pollen Robotics. To use a robot with ROS in Unity you need an existing URDF (robot file descriptor) which is usually shipped by the robot manufacturer. In specific I have decided to work on a static robotic manipulator and operate it with MoveIt!.

There are already quite few tutorials on how to do that in Unity, however, I took the opportunity to create a MoveIt! connector for Unity which allows to control the robot using the MoveIt! MoveGroup API rather than creating custom services as done by other tutorials. I find this solution easier to plug to other robots since it uses all standard ROS messages and does not require an additional service. 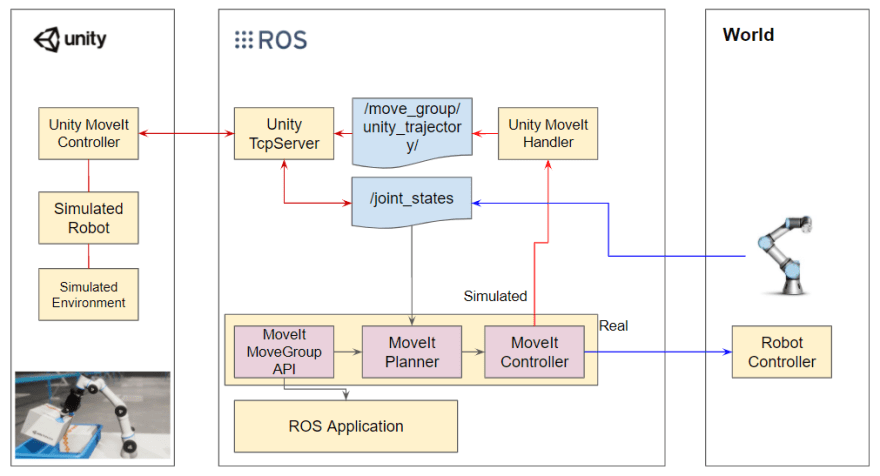 Both Unity and ROS share the same copy of the robot descriptor URDF. Unity will serve as main source of the joint state of the robot. MoveIt! will use the information streaming from Unity to plan the route and send the arm trajectory back to Unity which will actuate the joints.

The custom code for the project has 3 main components which are in Github:

Let's now install our ROS distribution. I am using ROS1 because lots of necessary libraries are missing in ROS2. ROS will only be installed inside the docker even though I have a ROS version also installed in my WLS2 for quick tests.
Along with ROS, the docker image will contain few libraries which are available in Github and we will use for our demo.

I am using a fork of Reachy's URDF for ROS1 since they recently moved to ROS2.

Now all is setup to start using our ROS system!

Let's now setup Unity to work with ROS over Docker. But first, let's install Unity3D, if you still do not have it. https://unity3d.com/get-unity/download. I am working with the community version (2020.2.5f1). 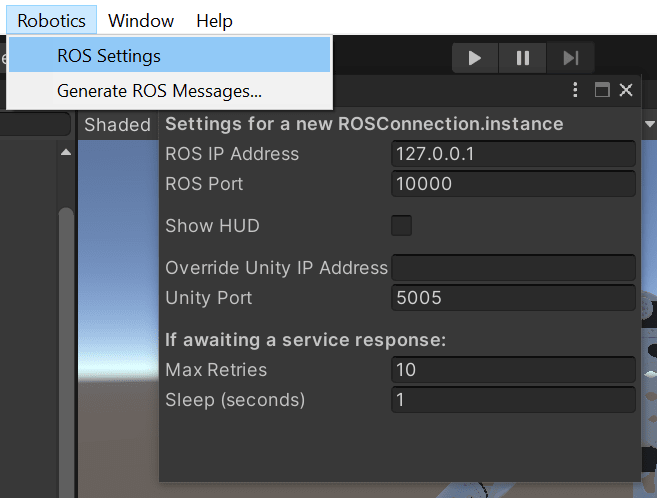 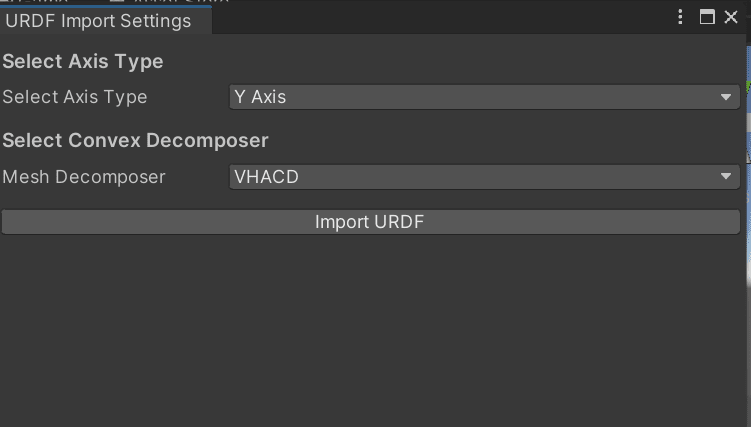 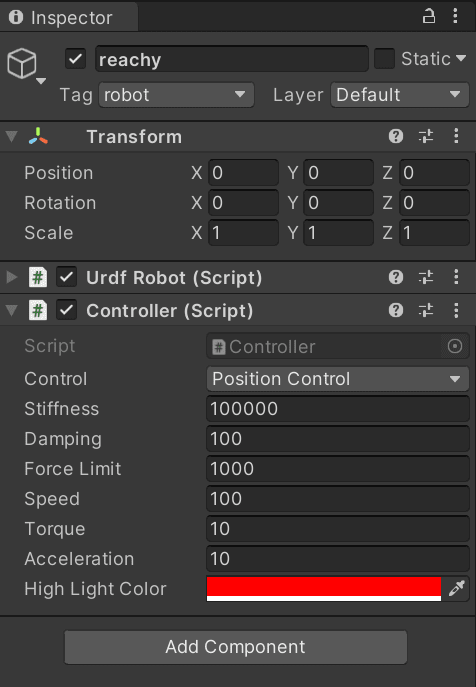 Note that these are arbitrary values which I manually tuned. Accurate values could be provided by the manufacturer.

We are done with importing Reachy. We should now see it in our simulated world! 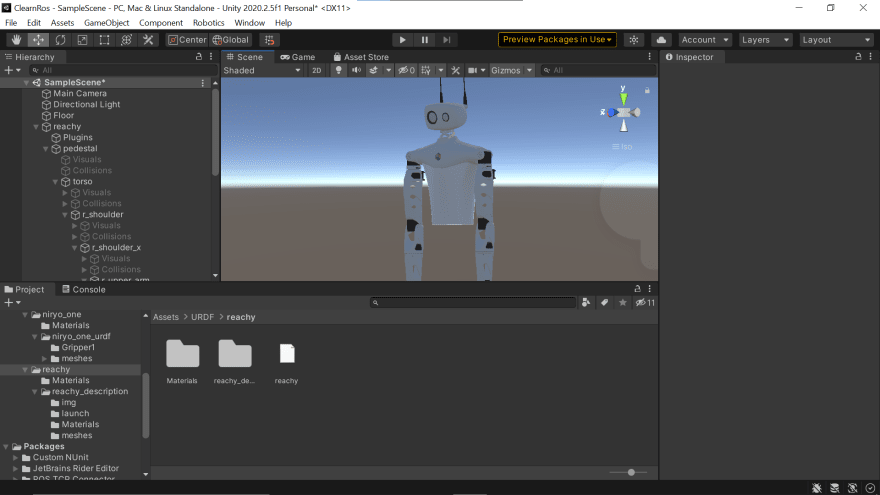 Here we setup a script to control Unity's ArticulationBody objects with MoveIt! messages from ROS. I have uploaded the script in this repository https://github.com/szandara/unity_moveit_connector/blob/master/Editor/ROSMoveItControllerGeneric.cs 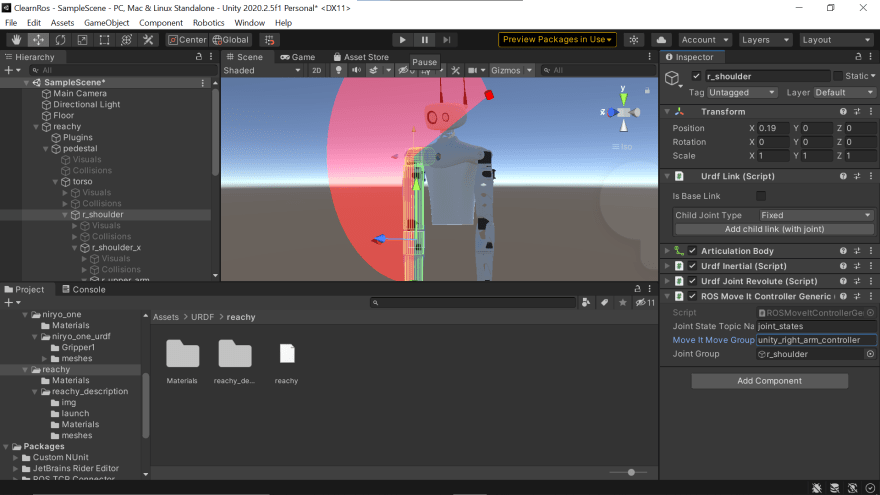 We are done! We have setup Reachy to talk to ROS!

As last step, we need to start the system. Let's dive right into it.

You should see a confirmation that you can start planning.

You should see the MoveIt command line.

Make sure you see no errors. If you receive an error the problem could be related to the time offset of Windows vs WSL2. To fix it, open a WSL2 console and run the following

You should see Reachy moving its right arm to the top! Congratulations in planning your first Unity simulation! 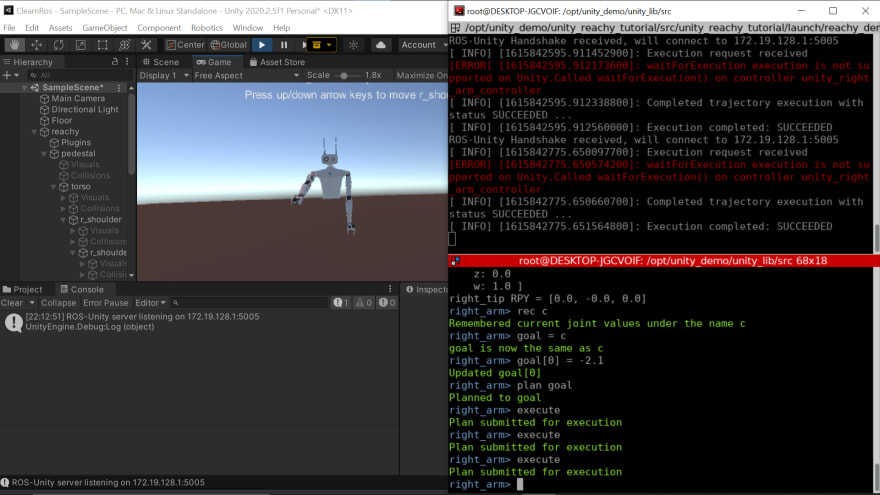 I had lots of fun doing this project and I am going to pursue a personal project using this setup. However, the solution is far from perfect. The pitfalls experienced due to Windows and WSL2 not working well together is substantial and by no means ensure a relaxed development environment for professional use.

The lack of support for ROS2 by Unity has also lead to produce a probably soon outdated ROS project and an eventually painful migration. Unity has announced that ROS2 support is under development and I will make sure to update this article with the new ROS2 version.

Nonetheless, it was rewarding to know that I can now develop robotics comfortably from my Windows host!

Installing Zsh and Oh-my-zsh on Windows 11 with WSL2

Make a Multiplayer and Multiplatform Game Without Code

Once suspended, szandara will not be able to comment or publish posts until their suspension is removed.

Once unsuspended, szandara will be able to comment and publish posts again.

Once unpublished, all posts by szandara will become hidden and only accessible to themselves.

If szandara is not suspended, they can still re-publish their posts from their dashboard.

Once unpublished, this post will become invisible to the public and only accessible to Simone Zandara.

Thanks for keeping DEV Community safe. Here is what you can do to flag szandara:

Unflagging szandara will restore default visibility to their posts.