What is C# Yellow Book

Rob Miles' book, The C# Yellow Book is a beginner-friendly book to introduce students to C# and programming in general. It is short and makes a for a fun read. The book is not only free, but it also comes with code samples, that a student can use to learn and test their concepts.

Why convert code to images

I picked this book for a Coding Bootcamp that I am running in my local community. I want my students to read the code samples, run them in their Visual Studio, and explain the code line by line. It is a simple task. Unfortunately, many students take the copy-paste path to cheat through the assignment.

So to force some of my challenging students to type, I decided to provide them with the code samples in image formats.

How to convert code to images

Carbon is easy to use, and performant website that converts your source code to beautiful photos. You can customize the programming language parser, fonts, themes, and even window type. It is a fantastic service.

There is a third-party command-line tool carbon-now-cli that lets you use the Carbon service from the comforts of your terminal.

I do not need to distribute the bin and obj folder. I also do not need Visual Studio projects. I expect students to create the projects themselves.

Only files that I want to loot from this sample archive is the Program.cs file present in every folder.

Write a fish shell script that will pick Program.cs file from each folder, rename it to the folder name, convert it to an image, and then place it in a new destination folder.

Let's get this task done.

Unzip the archive and cd into the folder.

It shows the name of each folder.

We know each Program.cs file is present inside a folder named YellowBookSamples in each of these folders. Let's check this assumption.

This script tests if the file is present in the folder or not. If the file does not exist, then it prints the message "not found in <folder name>".

On running, I got

We have all the information we need. Let's create a destination folder.

Now we write a script to pick the Program.cs file and convert it to an image.

When I used carbon-now, it did not work unless I used it with the -h, i.e. the headless option. -l ../dest/$f is the location to save the image and -t $f is the image name.

The result is that each code sample is converted to an image and placed in its folder. 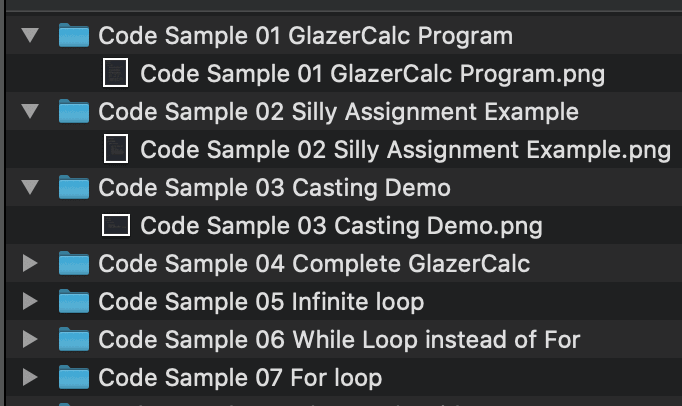 Unfortunately, carbon-now command did not work for eight projects. I had to convert them manually.

carbon-now sends the file to the Carbon via URL parameters, because as of writing this article, Carbon does not have an API. The files are probably
too long to be handled via URL.

Finally, I optimized the images using ImageOptim. I ran the following script from the dest folder.

I had to add a one-minute because ImageOptim sometimes crashes if too many images are passed to it at once.

I have uploaded the images in this Github repository.

ValueError: invalid literal for int() with base 10

Talha Mansoor
I am a polyglot seasoned software engineer. Besides the day job, I contribute to open source projects, beta test startup products, and offer consultancy.
Iterate Over An Array And Remove Elements
#todayilearned #tutorial #algorithms #backtobasics
How To Add An Empty Directory To A Git Repository — Two Different Use Cases
#git #gitignore #todayilearned #tutorial
Use sed To Extract Filename, Extension, and Directory From Path
#tutorial #regex #shell #todayilearned