I know you work hard.

You got 100 different side-projects.

Your GitHub is all green from those commits.

Then your day comes and finally, get that interview.

You watch a couple of videos on technical interviews.

You don't know shit about data structures and algorithms.

Don't worry I was in your shoes a couple of days ago, and I failed...

But I don't want you to fail.

So in this new series, I'm gonna be your new data structures and algorithms teacher.

PS. Unfortunately, I don't work at google **yet, but I still know a thing or two about the subject.

This is a very valid question because we live in an age where your gonna be using library functions for 90% of your code. It mainly comes down to four reasons:

What are data structures?

Remember when you were a kid and your parent's scolded you because you couldn't find your clothes in your messy room. Turns out your parents were right in saying to keep your room tidy, so that next time you need to find anything it will be much easier. We as humans already know why is it important to organize(structure) our stuff(data) in real life.

Another great example is a library. Imagine that you need to find a book on Russian history, you will first go to the history section, then the Russian section. If these books weren't organized you wouldn't be able to find your book easily, it would've been a very frustrating process.

So in short data structures refers to the way we organize our data.

Let us consider some examples:

The interface does not give any specific details about how something should be implemented or in what programming language.

Simply put, an ADT (Abstract Data Type) is more of a logical description, while a Data Structure is concrete.

Think of an ADT as a picture of the data and the operations to manipulate and change it.

A Data Structure is the real, concrete thing. It can be implemented and used within an algorithm. 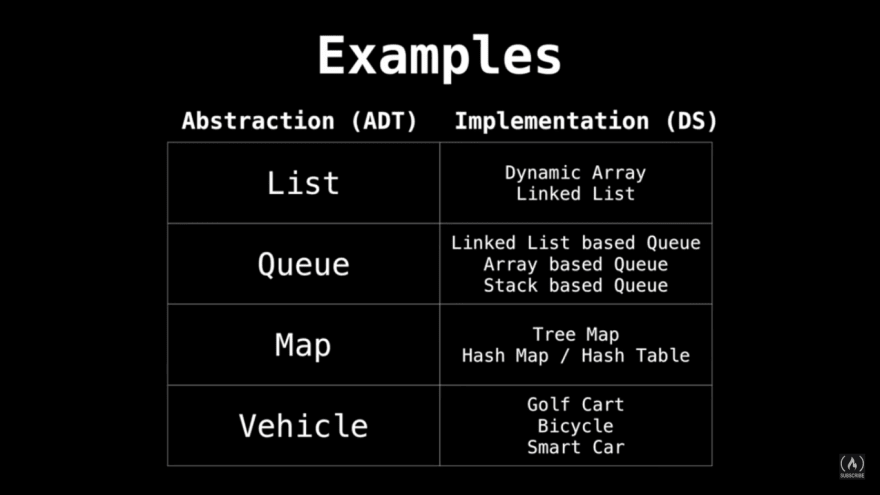 As programmers we keep asking these two questions:

Basically, it would be bad if:

Big-O Notation gives the upper bound of the complexity in the worst-case scenario, helping to quantify performance as input size becomes arbitrarily larger.

Basically, it shows you the worst-case scenario of your algorithm. For example, you may have a sorting algorithm. Then the big-o notation will get the complexity based on a huge list.

Another example may be, you got an algorithm to find the number 7. Big-O will get the computation but it will assume that the number 7 is at the end of the list.

Big-O doesn't care about small input, it only cares about large inputs. 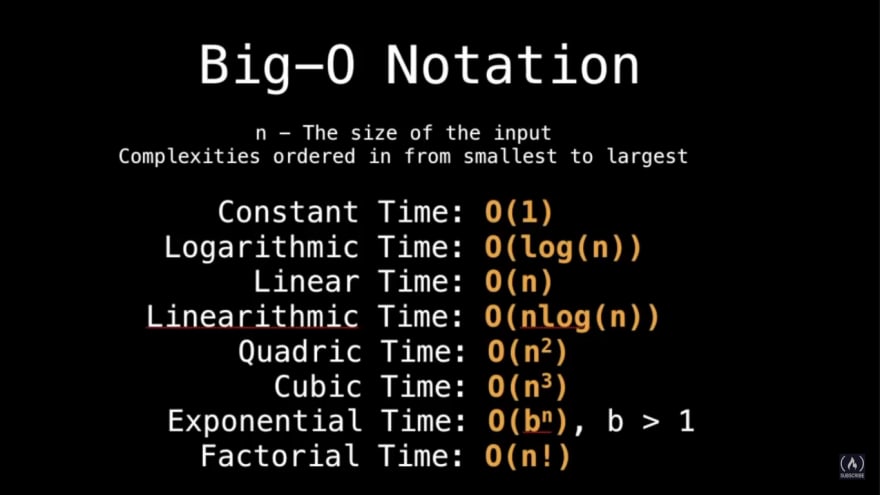 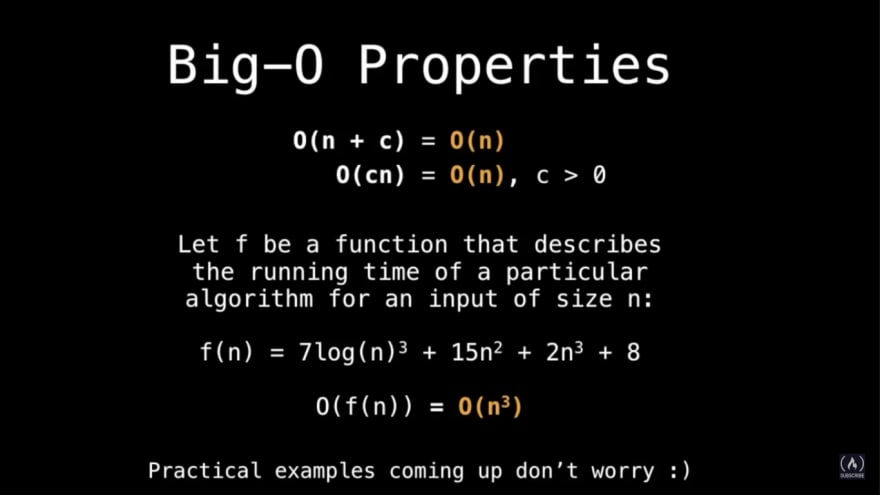 The first two properties explain why we can simply remove constant values (c), because if you're adding a constant to infinity that just equals infinity. Same thing with multiplication.

But this is just theoretical, in the real world if your constant is 2 billion, you can't ignore that.

The second half basically introduces us a mathematical function and show's us how to get the Big-O Notation. The basic premise is to simply take the biggest n, in our case it is n^3.

Now we will be breaking down the basics of time complexity (constant, linear, quadratic, exponential, and logarithmic). There are others but once you get the main ones, the others make sense.

Constant time complexity describes an algorithm that will always take the same time (or space) regardless of the input size. For example in Javascript, this can be as simple as accessing a specific index within an array:

It doesn't matter if the input is 5 or 5 million it will still take the same amount of time to compute.

Linear time describes an algorithm that it's computation power is proportional to the input size. For, example if you want to print out all elements in an array, logically speaking the larger the array the longer it will take to compute.

Logarithmic time describes an algorithm that runs proportionally to the logarithm of its input. I know it's a bit confusing at first, but let me give you an example. You want to find some name in a phone book, you obviously wouldn't need to check all the names one by one. You would simply divide-and-conquer by looking based on where their name is alphabetically. (This is a binary search and that's why its time complexity is O(log n)

This time complexity has two properties:

If n is 8, the output will be the following:

In general, this algorithm is better than O(n), it makes sense because log(n) is always gonna be smaller than n, much smaller.

Quadratic time describes an algorithm that runs proportionally to the squared of the input size. Usually, this is absolutely horrible, but to be honest, if you don't have a huge input it doesn't really matter.

In this example, we are looking up the array twice for every n basically n^2. Examples I think can be found in algorithms where you look up twice, like bubble sort.

Exponential Time complexity denotes an algorithm whose growth doubles with each addition to the input data set. If you know of other exponential growth patterns, this works in much the same way. The time complexity starts off very shallow, rising at an ever-increasing rate until the end. Algorithms with exponential time are often recursive algorithms that solve a problem of size n by recursively solve a sub-problem of size n-1.

Fibonacci numbers are a great way to practice your understanding of recursion. Although there is a way to make the Fibonacci function have a shorter time complexity, for this case we will be using the double recursive method to show how it has an Exponential Time Complexity. Here we are solving the main problem of size n by recursively calling the same function with the size of n-1 and n-2.

PS. Feel free to leave any questions down below, I would love to answer them 😃