So, you are in the process of developing your application. Perhaps this is your initial MVP. After you have finished with the outset documentation, primary use cases, and the architecture plan, there are two ways to proceed. Jump into the development process and test the product after creating the first working prototype, or spend more time testing the documentation, architectural plan, and the first iterations of the code. In short, these two paths are reflected in two types of testing – dynamic and static. Below, we’ll look into which one is best for your app and how to combine them in the best way possible.

What is static testing?

Static testing is a type of testing that doesn’t require a program’s code to be executed. At the same time, static testing can be both manual and automated. For example, you can use automated syntax checkers to test program code.

Static tests begin in the early stages of the software development cycle and are vital to the MVP verification process. This type of testing does not even require a computer in some cases – for example, when checking the product or feature requirements.

Most static techniques can be used to “test” any form of documentation, including code proofreading, an inspection of design documentation, functional specification, and feature requirements.

In addition to the usual process review, where your engineers will find inconsistencies in the documentation, technical requirements, and code architecture, there is also static analysis.

QA engineers use static analysis to detect the following bugs:

How does static testing apply in practice?

It is pretty easy to understand what static testing is. In fact, it is the process of checking the compliance of goals and use cases with the chosen development architecture and the code written for it. Here are the main stages of static testing:

While testing statically, try to only focus on the things that really matter. Create step-by-step checklists to make sure you haven’t missed anything important.

Dynamic testing executes code. It checks the functional behavior of a software system, its memory and CPU usage, and overall system performance. The primary purpose of this testing is to confirm that the software is operating according to business use cases.

Dynamic testing executes the software and verifies the result with the expected outcomes. Dynamic testing is performed at every level of testing and can qualify as either black-box testing or white-box testing.

There are three methods of dynamic testing:

In addition, non-functional testing such as performance and security testing falls under the same category of dynamic testing.

Here’s how to easily understand the difference between the two. Static testing checks code, requirements, and design documents for errors, while dynamic testing checks the functionality of a software system, memory, CPU usage, and overall system performance. 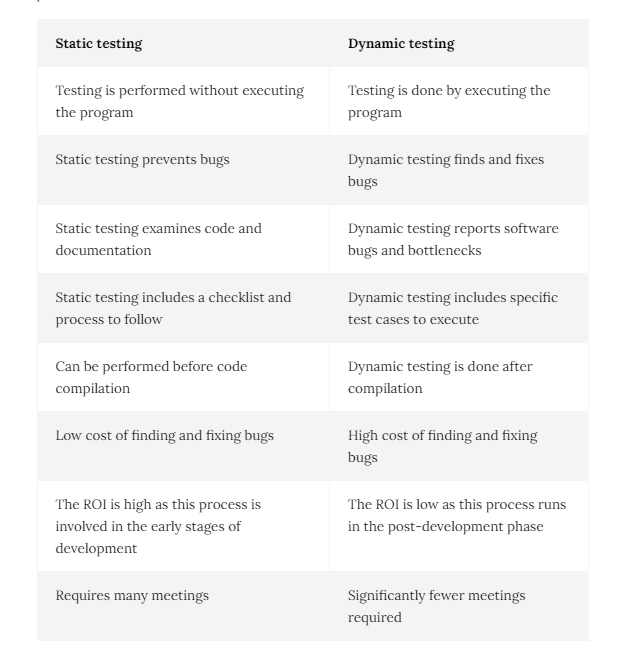 Before that, we talked about testing purely from an engineering point of view. But as you know, business expediency drives engineers. Business interests are paramount. So, what is the price of each of the two types of testing?

In our recent blog post, we looked at the topic of goal setting and cost management. We advise you to read it to better navigate the overall case. There we’ve summarized vital KPIs to evaluate your QA performance:

These KPIs correspond to a mixed approach to testing that uses static and dynamic tests in different phases of development. We at Testfort always advise our clients to use balanced strategies to provide the best value for money. 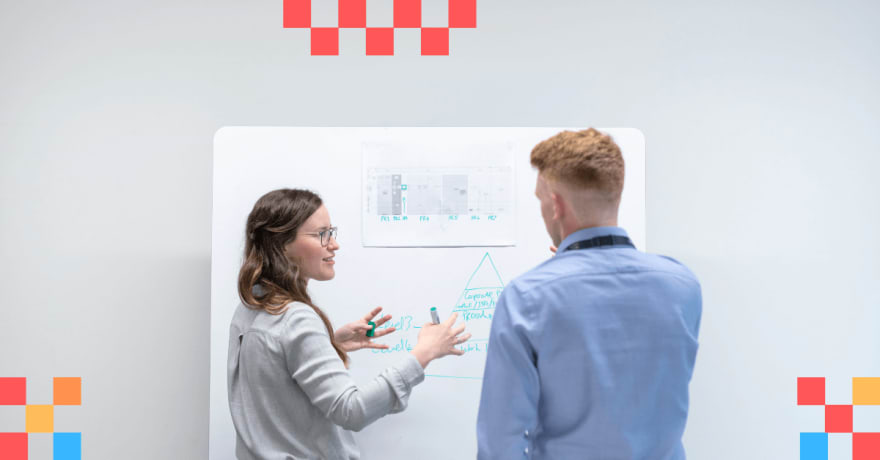 How do I save on testing?

In terms of price, the most suited investment is early static testing. For most small projects, well-structured static testing is 90% of testing in general. It allows you to eliminate most of the problems at the stage of working with documentation. Also, it is often possible for testing to be organized without the involvement of multiple senior engineers, which reduces the development budget.

The basic rule here is to split the product into many simple function pieces. Then check the functionality’s input and output and examine the code to acquire the desired results in the most elegant way. This is how to best minimize the costs for the next, much more expensive phase.

Let’s face it, dynamic testing and autotests cannot be avoided. But a well-planned architecture that includes static tests will minimize your dynamic testing costs. Pay attention to the critical KPI for this stage – the number of autotests. You should automate as many standard user action checks as possible. Firstly, you can reuse most of these tests later, and secondly, like any automation, they save time for expensive developers.

Despite the benefits of static testing, it will not improve the user experience. Examining the code and documents will not give you an idea of the final design of the application and its usability. In addition, a reasonably large number of bugs are carried over as design bugs and can only be detected during dynamic testing.

If your product is built based on several features, the balance between static and dynamic testing will inevitably shift towards the latter.

Should I organize testing in-house or outsource?

Please note that we at Testfort specialize in providing testing services. This means that we are interested in you becoming our client rather than trying to build a team yourself. Now that all the cards are on the table, we will answer this question briefly and honestly.

The rule of thumb is simple. If you’re working on a one-off project – app, website, or platform – that you don’t plan on changing on a weekly basis, get in touch with us. It will be more affordable and easier than hiring and managing a team. We can quickly organize the testing process, provide the best results, and advise you in managing the development process in its entirety.

If your product is a system in which you make frequent and extensive changes (both in design and functionality), you can invest in your own team. This also means you should have a large enough development budget to accommodate the frequent changes. It does not mean that you won’t be able to solve testing problems with the help of partners like us. It’s just that after a certain point in time, the amount of investment in in-house and outsource teams will be practically even.

Once suspended, testfort_inc will not be able to comment or publish posts until their suspension is removed.

Once unsuspended, testfort_inc will be able to comment and publish posts again.

Once unpublished, all posts by testfort_inc will become hidden and only accessible to themselves.

If testfort_inc is not suspended, they can still re-publish their posts from their dashboard.

Once unpublished, this post will become invisible to the public and only accessible to TestFort.

Thanks for keeping DEV Community 👩‍💻👨‍💻 safe. Here is what you can do to flag testfort_inc:

Unflagging testfort_inc will restore default visibility to their posts.