English: "IT Brazilians professionals who lives in Brazil, with no real relevance overseas, tweeting in English, until when?
Our country needs good professionals, and needs to include hundred thousands of people in IT, and most of them don't speak English. Be better than that, share in Portuguese.

Kind of extreme, but I understood his point even though I believe people is free to post whatever they want and in the language they want. As you can see, many people had replied to this tweet and it became an interesting thread.

Sometimes what you want to share is relevant to part of your audience, other times it can be useful to multiple cultures and as English is the universal language, I do believe we should share the content in English.

Believe or not, there's a website who can translate what you want to multiple languages, and it's free. All you need to do is go to https://translate.google.com and select the source and target languages, write the text you want to translate and hit the enter key.

Funny story: my friend Rodrigo Kono traveled to Japan and spent two hours at the airport trying to get help to go to his hotel. He sent me an audio telling me this "problem" and I reminded him about Google translator app, which has a feature where you can use the camera of your phone to translate a text in real time. He managed to go to his hotel and days later, return to Brazil and the day was salved thanks to his former roommate over here.

But what if you're not a Google fan or if you want to include translation features in your applications? You can consume AI pre-trained models through REST API's and achieve the same result.

In 2016 while I was living in New Zealand, I've met a guy who started his own company after his app got featured on Tech Crunch. Basically he created an app and disrupted the traditional 1-1 language translation. You can read the full article in here: https://techcrunch.com/2016/04/20/miss-d-is-a-dictionary-app-for-the-linguistically-curious/

The first thing we need to do is access Azure Portal and create a new "Translator Text" in your Azure Subscription: 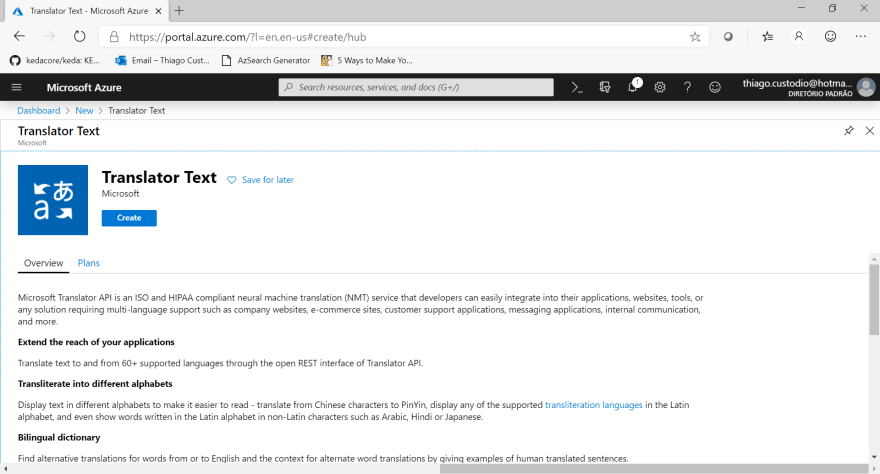 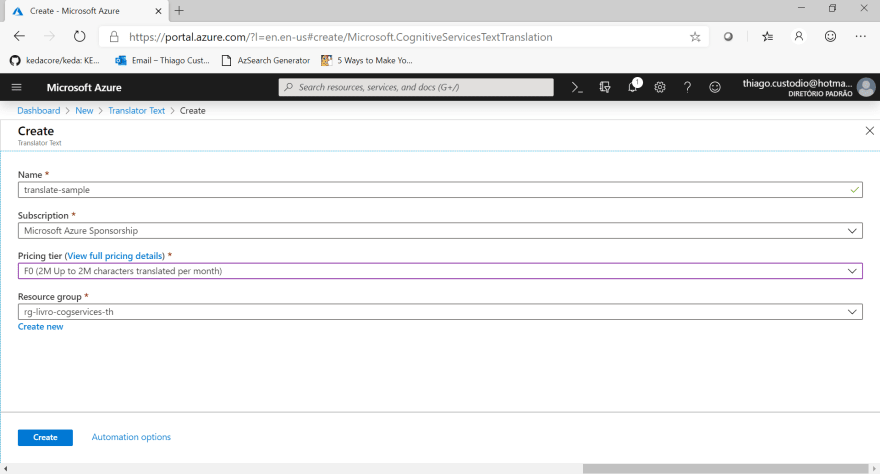 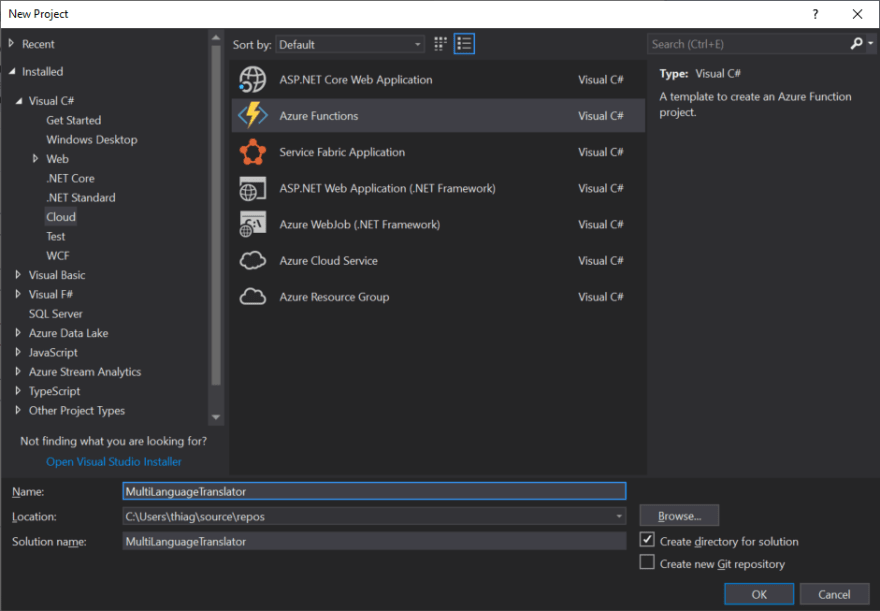 After that, let's specify that our function will be triggered whenever a new blob was uploaded to our Storage Account: 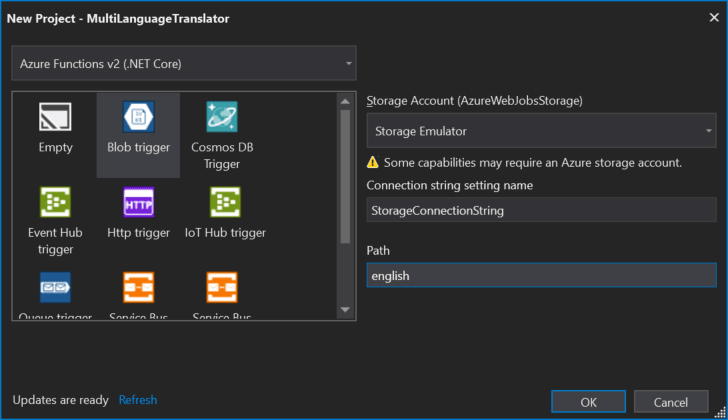 Next we need to install a nuget package to simplify the http request against the Cognitive Service which will translate out text:

In summary, Azure Functions will get the content of the original text that will upload into the Storage Account defined through the connection string StorageConnectionString. The content can be accessed through myBlob variable.
We're reading the content using the StreamReader class, then creating a string array with the languages we want to translate from the original English content.

Then, we getting some environment variables (we'll define on Azure Portal when we create the Azure Functions), and lastly we're accessing the storage account once again, but this time to store the translated text. 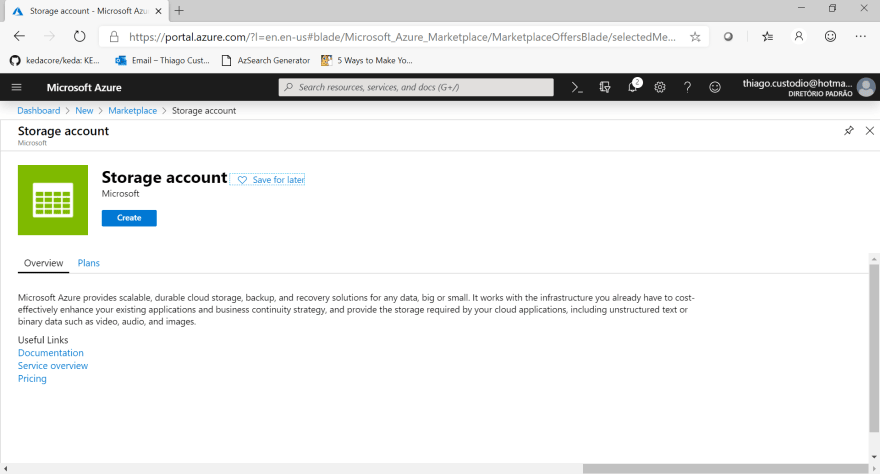 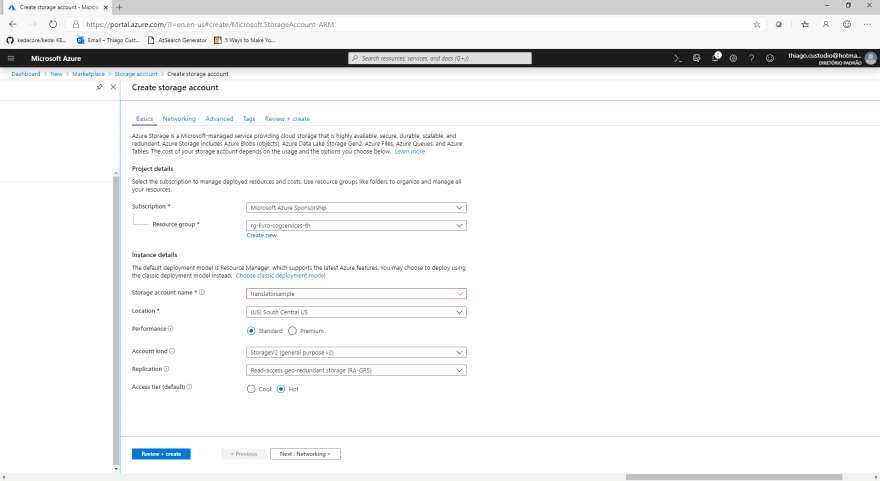 Then's let's create the azure functions and get the publish profile to simplify our deploy process: 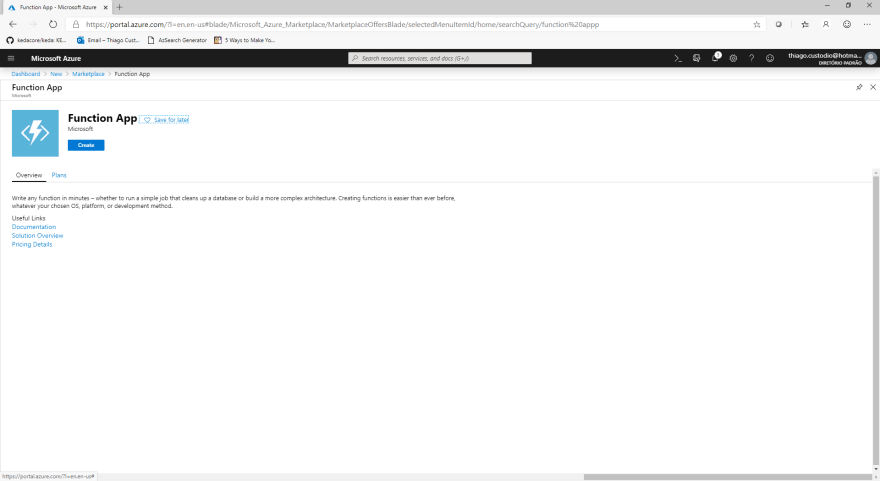 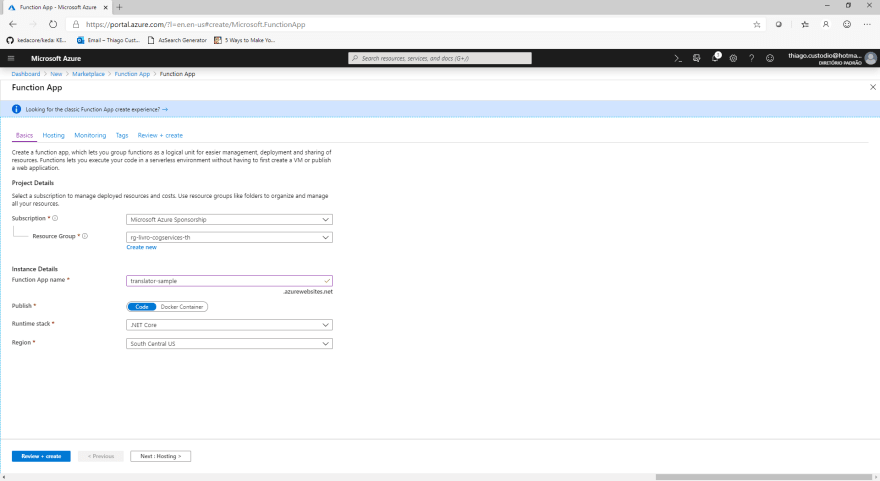 After it's ready, we can get the publish profile through the overview tab: 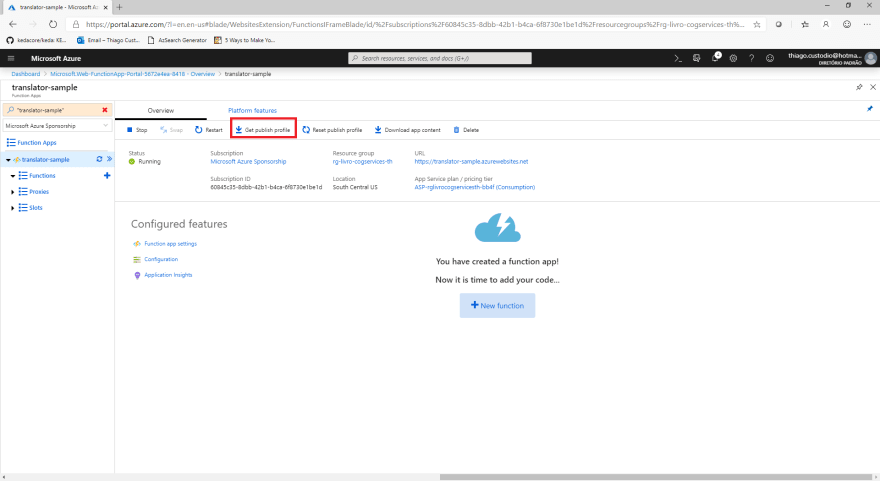 Now, let's use our Visual Studio to publish our code: 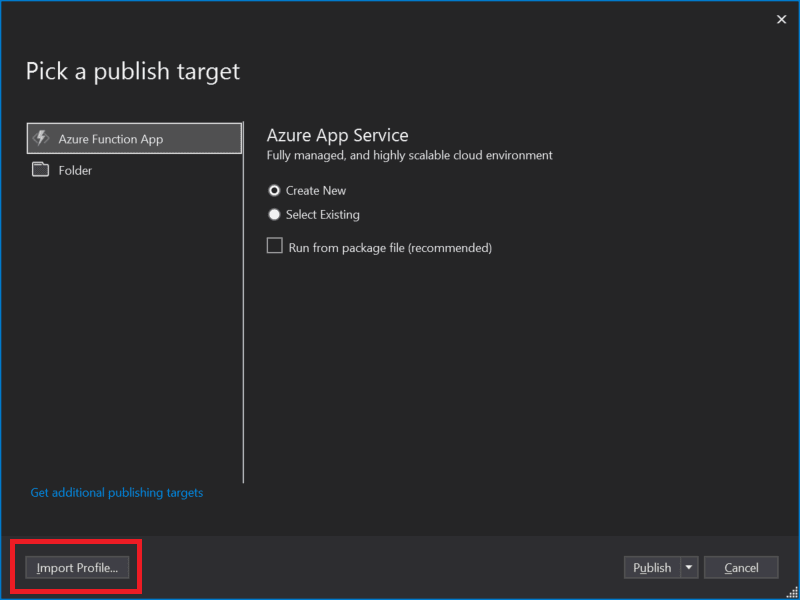 Lastly let's create the environment variables clicking on the configuration link also from the Overview Tab:

Let's see everything in action:

The full language support can be found in here: https://docs.microsoft.com/en-us/azure/cognitive-services/translator/language-support

ERROR: THE ACTIVE DURATION IS TOO SHORT WHILE REMOVING ROLE ASSIGNMENT

How to replace BackgroundServices with a lite Hangfire

Once suspended, thdotnet will not be able to comment or publish posts until their suspension is removed.

Once unsuspended, thdotnet will be able to comment and publish posts again.

Once unpublished, all posts by thdotnet will become hidden and only accessible to themselves.

If thdotnet is not suspended, they can still re-publish their posts from their dashboard.

Once unpublished, this post will become invisible to the public and only accessible to Thiago Custódio.

Thanks for keeping DEV Community 👩‍💻👨‍💻 safe. Here is what you can do to flag thdotnet:

Unflagging thdotnet will restore default visibility to their posts.