gRPC is an open source, modern RPC framework initially developed at Google. It uses protocol buffers as an interface description language, protobuf is a mechanism for serializing structured data. You just define your services and its data structure in the proto file and gRPC automatically generates client and server stubs for your service in a variety of languages and platforms. Using profobuf allows us to communicate using binary instead of JSON, this makes gRPC much faster and reliable. Some of the other key features of gRPC are bidirectional streaming and flow control, blocking or nonblocking bindings and pluggable authentication. gRPC uses HTTP/2 which uses multiplexing by which client and servers can both initiate multiple streams on a single underlying TCP connection, You can read more about gRPC here.

gRPC-Web is a javascript library using which we can directly talk to the gRPC service via web-browser. gRPC-Web clients connect to gRPC services via a special gateway proxy(Envoy proxy) which is going to be a docker service in our case running on the same server machine which bridges GRPC( HTTP/2) with Browser Communication (HTTP/1.1)

This was the game changer because initially we were able to use gRPC only for communications between services or micro-services and the client can only use REST API calls to access the data, but now by using the gRPC we can make use of the power of gRPC throughout our app and eliminate REST

Why gRPC is better than REST

The major differences between REST and gRPC are 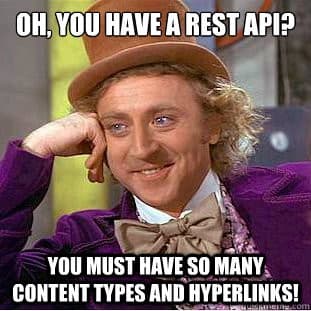 Since we are using Protobuf in gRPC we don't have to care about the verbs(GET, PUT) and headers etc. Also, it reduces the serialization code which we have to write for all the data models the stubs generated by the gRPC framework takes care of these.

Since we are using HTTP/2 in gRPC now we can stream both request and response and get rid of latency issues, Head of line blocking and complexity in establishing TCP connections. 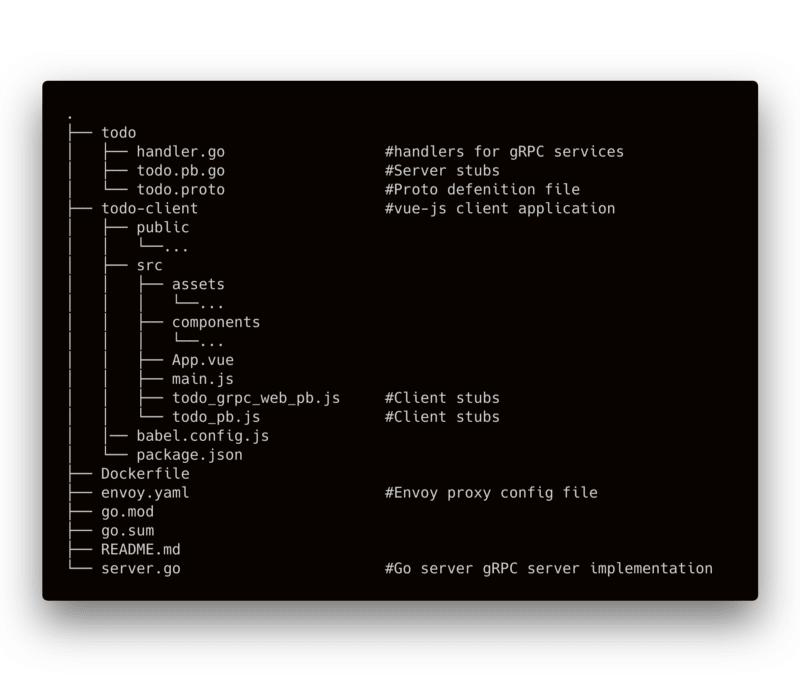 An overview of topics to be covered

Okay now let's jump into the code, the proto file is the heart of our gRPC app using this file the gRPC framework generates the client and server stubs, we define our data models and the services which are going to consume those data models, this file will be placed inside the todo folder at the root of our project.

The first line of the file specifies the version of the proto-buffer we are going to use, the same package name we specified in the second line will also be used in the generated go file. In our todoService we have three RPC methods addTodo, deleteTodo, getTodos with its request types as arguments and response types as the return type of the RPC method. On each message type we specify tags like=1, =2 which are unique tags which will be used at the time of encoding and decoding. The repeated keyword means that the field can be repeated any number of times.

Next step after creating our proto file is to generate the server stubs using which we will create our gRPC server. We are going to use protoc to generate the stub files, use the below command from the root of the project

Now we have to write handler methods for all our RPC methods specified in the proto file, we will be creating a new file handler.go inside the same todo folder.

For the sake of simplicity, I am not going to use any database for storing and retrieving our todo’s, Since we are in the same generated todo package I can use the request and response data types from the generated stub files. All our handler methods are tied to the server struct.

In addTodo handler function, I am using a UUID package to generate a unique ID for every todo’s and generate a todo object and append it to the Todos list in the server struct

In the GetTodoshandler function, I am just returning the Todos list inside the server struct.

In the deleteTodo handler function, I am just doing an find and delete operation using the todo id and updating the Todos list in the server struct.

3. Hook up the gRPC server

Now we have to hook up all the handler and start the gRPC server, we are going to create a new file server.go in the root of our project.

To run the above file use go run server.go from the root of the project which will start the gRPC server.

Envoy proxy is going to be a docker service which will be sitting in between our server and client apps, below are the envoy proxy docker and config files.

To build the Docker container

To start the envoy proxy start the docker container using

Now the only missing part is the client, we are going to use Vue.js framework to create our client web application, for the sake of simplicity we are only going to look at the methods which are responsible for adding and deleting the todos.

Use the below command to create the client stubs

The above command will create two files todo_pb.js and todo_grpc_web_pb.js in the src folder. For the sake of simplicity, I am only going to cover the parts where gRPC service client is used

In the todo component of our client app import all the required data types from todo_pb.js and the client from todo_grpc_web_pb.js we then create a new client instance using todoServiceClient and use the localhost URL with the port which we configured our envoy proxy to listen as the server URL and save the client instance.

Above are the methods hooked up to the components add todo button click and delete todo icon click. We are just using our client stubs to execute our gRPC services and use the stub datatypes and it’s setters and getters to handle the data to be sent/received from the server.

Thank you for taking the time to read this till the end😁, If you have any queries regarding this or something I should add, correct or remove, feel free to comment below.

You can find the full source code at this repo, and follow me on GitHub and LinkedIn

ES Modules and CommonJS: An Overview

Once suspended, thearavind will not be able to comment or publish posts until their suspension is removed.

Once unsuspended, thearavind will be able to comment and publish posts again.

Once unpublished, all posts by thearavind will become hidden and only accessible to themselves.

If thearavind is not suspended, they can still re-publish their posts from their dashboard.

Once unpublished, this post will become invisible to the public and only accessible to J Aravindhan.

Thanks for keeping DEV Community 👩‍💻👨‍💻 safe. Here is what you can do to flag thearavind:

Unflagging thearavind will restore default visibility to their posts.