“If you don’t like unit testing your product, most likely your customers won’t like to test it either.” - Anonymous

Few developers get excited over the idea of writing tests for their code. Especially with pressure to finish new features as fast as possible, it is an annoyance to write test code that doesn’t directly contribute to the progress of the project. This may seem fine at first when the project is small and you can test the few features manually to make sure everything looks fine but as the project grows, this manual checking is not only horribly inefficient and low quality but basically impossible.

Investing in testing upfront is one of the best investments you can make on your project. It is what allows you to write a feature, not touch it for weeks, come back, see it is passing all its tests, and have a level of confidence that everything is good in the world. This post will cover some important testing concepts and how to apply them to your JavaScript projects.

- describe what is being tested, under what scenario, and what the expected result is. 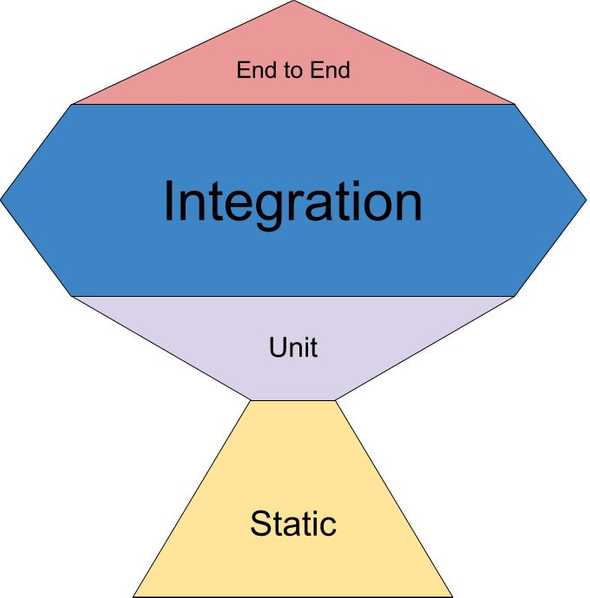 Static tests run as you type your code.

A unit test is a test that verifies the behavior of a small unit of code independent of the rest of the code. These tests are not about finding bugs but rather about ensuring a small section of code works as expected and continues to even as refactoring (restructuring of code but not functionality) may occur.

These are short, fast, super specific error area, quick to write, and cheap but offer minimal actual overall testing confidence per test and require a lot of them to have good coverage.

Integration tests verify that several units work properly together. It used to be popular to write a lot of unit tests but the trend seems to be moving to less unit tests and more integration tests since one integration test can test functionality that would take several unit tests to test. Obviously it is sacrificing the ability to have a fine grained knowledge of where a bug is when a test fails but it is important to find a balance between saving time and the amount of specificity you have.

These are usually 4-5x the size of a unit test, still pretty fast, decently small error area, a little more involved to write, not as cheap as unit tests but still reasonable, and offer decent actual overall testing confidence per test and don’t require as many tests to have good coverage.

End to End tests verify complete user flows by simulating actions as a user would actually do them.

These are large, slow, huge error area, very intensive to write, and expensive to run, but offer very high confidence and don’t require many of them.

“More than the act of testing, the act of designing tests is one of the best bug preventers known. The thinking that must be done to create a useful test can discover and eliminate bugs before they are coded.” – Boris Beizer

This software development methodology aims to write more reliable and well designed software by writing failing tests first and then writing code that makes the tests pass. By focusing on only writing the code that is necessary to satisy your tests, your code should stay short and clean. TDD centers around 4 main cycles.

These laws are applied second-by-second in TDD.

These steps are followed minute-by-minute in TDD.

As the tests get more specific, the code gets more generic.

Every hour, you should stop and check to see if you have reached or crossed a significant architectural boundary in your application. This gives you a chance to look at the program at a higher level and plan out where you want to draw the boundaries and appropriately focus your next hour of TDD cycles.

Continuous intregation is the software development practice of frequently pushing small changes to your code repository. For every push, automatic formatting and testing should be done. This gives the developer a quick feedback cycle for determining potential conflicts in commits while also allowing to frequently merge new updates to an application.

Also called continuous delivery, continuous deployment works in conjunction with CI to take the tested and built application that results from the CI process and deploy (or deliver) it to the intended infrastructure. With CD, teams can push new code to production every day or even hourly.

Testing is a complex and important concept in the software world that is too often thrown to the side but with newer practices like CI/CD, having solid tests is more crucial than ever. There is no golden rule for how to write perfect tests but using TDD and trying to get ~80% coverage with a combination of unit, integration, and end to end tests should lead to clean, confident code. It takes some time to setup at first but the confidence that automated testing gives you in the end is priceless. Give the concepts from this post a try and I hope it helps relieve some of the stress that developers can feel when programming.

Once suspended, thefinnomenon will not be able to comment or publish posts until their suspension is removed.

Once unsuspended, thefinnomenon will be able to comment and publish posts again.

Once unpublished, all posts by thefinnomenon will become hidden and only accessible to themselves.

If thefinnomenon is not suspended, they can still re-publish their posts from their dashboard.

Once unpublished, this post will become invisible to the public and only accessible to Chris Finn.

Thanks for keeping DEV Community 👩‍💻👨‍💻 safe. Here is what you can do to flag thefinnomenon:

Unflagging thefinnomenon will restore default visibility to their posts.