There are quite a few ways to resolve conflicts in git, whether it's through the command-line or a GUI. In this post, I'm going to offer an opinionated solution using the command-line and, more specifically, using a tool called vimdiff (because I'm most familiar with the Vim interface). If you find this post helpful, head on over to my blog and check out some of my other posts!

Set up Git config with your tool of choice

The first thing you'll want to do is configure git to use the mergetool you're most comfortable with. There are a number of options to choose from, including emerge, gvimdiff, kdiff3, meld, vimdiff, and tortoisemerge. For a complete list of tools and settings, simply run git mergetool --tool-help in your terminal. In this post, I'm going to use vimdiff. Now, I could do this by runnning git -t vimdiff, which would configure it as my tool for this session only. However, I want git to always default to this tool for any future conflicts.

So, the first few commands that we'll run are:

The first command specifies which tool is used by the git-mergetool. The second command specifies the formatting of conflicts in your terminal. Setting "diff3" in this instance adds the original text to the conflict display, but leaving it as default and omitting the second command is fine as well. Finally, the last command just ensures that the user is prompted before the merge resolution is executed.

Executing the git mergetool command will run the mergetool and you can begin resolving conflicts.

Your terminal should now display an interface similar to the format in the image below. 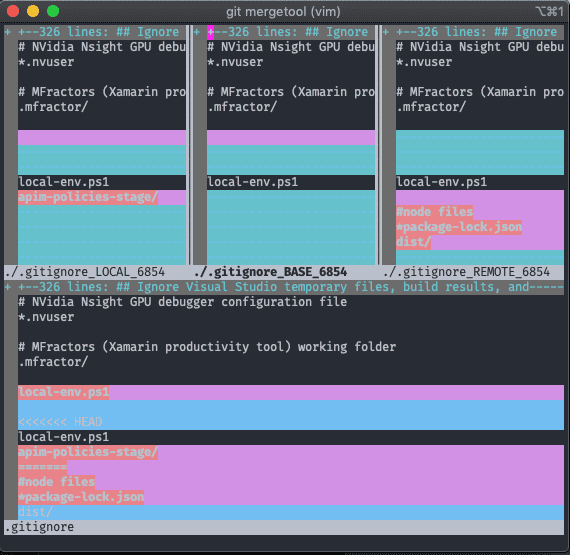 As you can see, there are four sections in this UI. The local section is the file from the current local branch. The base is the common ancestor between the local and remote commits. This is essentially what the file looked like before either commit was changed. The remote file is the one you are merging into your branch. Lastly, the merged file at the bottom is the result of the conflict resolution and what will be saved in your repository after you execute the resolution.

You can navigate between the four areas of the terminal using Ctrl W to move between windows, or Ctrl W + J to move directly to the merged window. For other navigational commands, visit the vim docs.

Once you've navigated to the window that you want to edit, press the i key to insert text in Vim. After you're finished making the changes you'd like, press the esc key to exit insert mode and enter command mode, and you should see those changes reflected in your merged section. If not, simply type :diffupdate and hit enter and the UI should update to show your merged copy.

If this seems tedious and you would rather take a complete copy of either the local, base, or remote files, you can run the following commands. :diffg RE gets the entire changes from the remote copy, :diffg BA from the base copy, and :diffg LO from local.

After you're satisfied with the changes you made, and the merged copy reflects what you were after, it's time to save and commit the changes.

Enter command mode by pressing esc, and type :wqa. This command will write, save, and quite all filles within Vim. You are now ready to commit your changes using the well-known git commit -m "My Commit Message" command. Vimdiff will create a few files for you during the resolution, most ending in a *.orig suffix, but to get rid of these files simply run git clean.

That should do it. Assuming you had no other conflicts, you should now be ready to push your changes. If there are more, feel free to use the same process we just went over to resolve any outstanding conflicts. I originally decided to write this article as a reference guide for myself, but I hope I've helped a few other frustrated devs stuck in conflict purgatory along the way 😉.

How to Clone a Specific Git Branch

Clayton
Mostly dabble in .net and JavaScript, but always enjoy learning something new! Other passions include personal finance, bourbon, and sports (huge Georgia Bulldogs fan).
Improve Your Git Commit Message Like a Pro
#javascript #git #github #community
Who or what are you grateful for in tech?
#discuss
#gitPanic - Removing and Restoring Work
#github #git #programming #beginners

Once suspended, thefrugaldev will not be able to comment or publish posts until their suspension is removed.

Once unsuspended, thefrugaldev will be able to comment and publish posts again.

Once unpublished, all posts by thefrugaldev will become hidden and only accessible to themselves.

If thefrugaldev is not suspended, they can still re-publish their posts from their dashboard.

Once unpublished, this post will become invisible to the public and only accessible to Clayton.

Thanks for keeping DEV Community 👩‍💻👨‍💻 safe. Here is what you can do to flag thefrugaldev:

Unflagging thefrugaldev will restore default visibility to their posts.