One day I used to be a junior developer, having many problems with no solution for them. I used to struggle with many strange things with no explanation for them.
I learned how to overcome challenges (obstacles). I understood how to solve and avoid them in advance. I was studying algorithms and patterns in order to make things run smoothly, making my output more predictable year by year.

Ages later I had taken a plunge into React, and I was amazed how it simplified everything: bugs disappeared, everything performed well! How to make it more simple and easy to handle? That was the only question left.

These days are now left behind.
I have just cleared up that in a week with hooks I had created and solved more problems than in a whole year prior.
Once again I am a Junior Developer. Once again I am facing issues with no explanation for. I have to and I am going to explore new patterns to handle upcoming problems.
Join me at my journey.

A detective tragedy in 3 parts

Déjà vu is the feeling that one has lived through the present situation before. The phrase translates literally as "already seen".

One day a few different people met in one issue. They had a great conversation about the future concurrent rendering, which would drive the development of React-Redux v6 later.

The main problem was “tearing” - different time slices coexistence in one render(output). Some component might see the New State, while others might still see the Old. You, as a User, will see both.

It was just a theoretical issue, "insignificance" of which was confirmed by a React team(after React-redux v6 failure). However here is an example which might prove it. 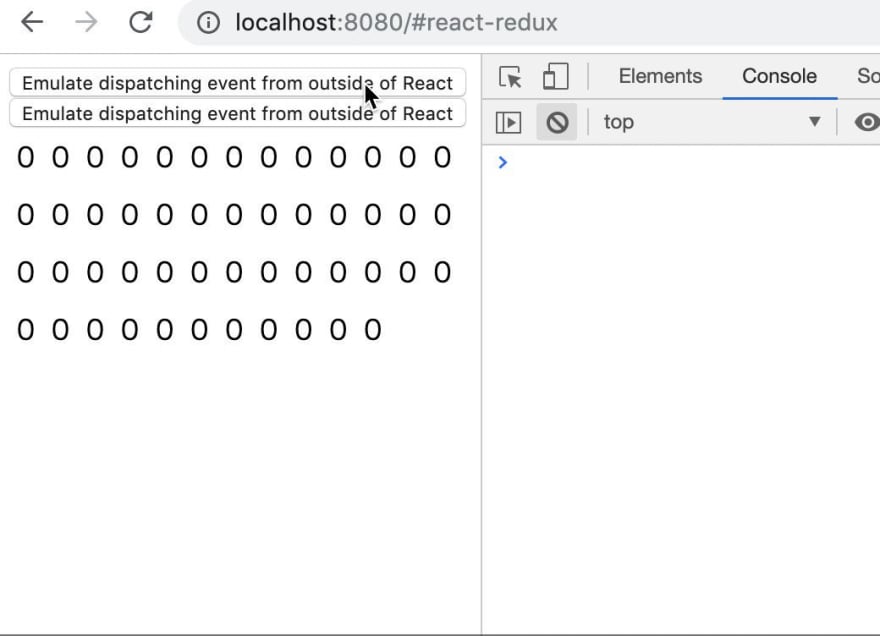 So, I made a tiny tool to reproduce the "tearing" problem in concurrent mode. See how it looks like with react-redux v7.1. The tool has a jest spec to check various libraries. #reactjs #react #javascript #reacthooks #redux

Anyway, the main point there is that a year ago it used to be a theoretical issue, which could be faced far ahead when React would become ~asynchronous~ concurrent.

Although, react is still synchronous, we had got a problem, it was brought not by that asynchronicity, but by hooks and closures - functional scopes we love javascript for.

It's common now, that the state is always partially in the past.

There was no such thing as the "past" with Class based components - there was the only one this, and nothing else. And this always represents the "present".
With hooks, well...

In RxJS world it's called glitches - temporary inconsistencies emitted by Observables - and they are not considered as a problem.

Glitches in React are also more about features than bugs. However, they are at least a big performance problem. 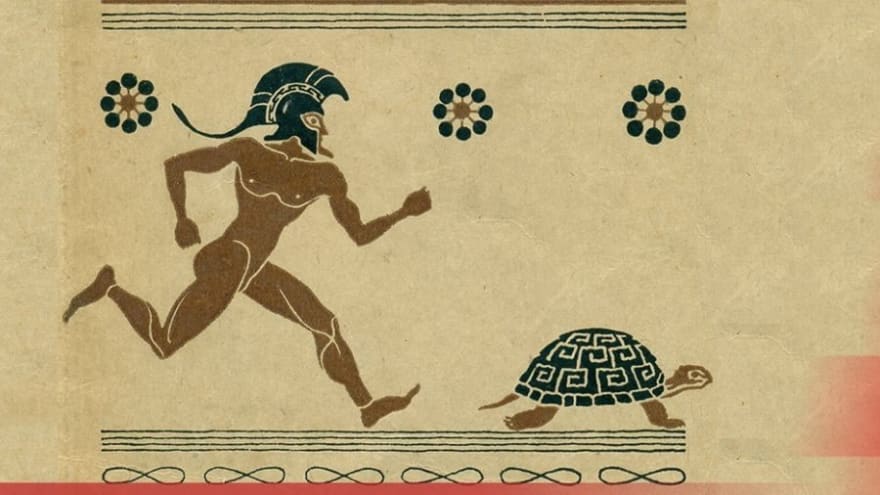 Achilles and the tortoise paradox

To get started, let's pick a simple problem to deal with - event propagation speed. The problem is easy to reproduce, and you might have already had this one... in case you have more than one state management system.

Let's imagine you are changing the location. What would happen then?

So, you did nothing wrong, but got a double render by mixing states with different event propagation speed as a result.

Good news - React-Redux v7 has solved this problem. it just uses the same Context as Redux-Router, resulting in the same"event propagation speed". However, any other state management, especially with a custom subscription model, might not solve the problem (yet).

There is a question. What would happen in case another render dispatched some events changing the state again?

Well, "Achilles, the Tortoise", and you will get more wasted renders. 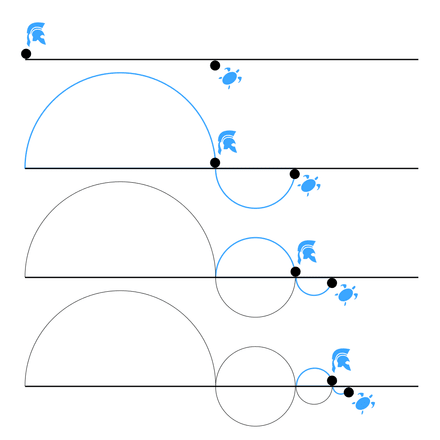 However, you might think that this is not your problem. I wouldn’t go along with it. Let's have a look on the same(!) problem from a different perspective. 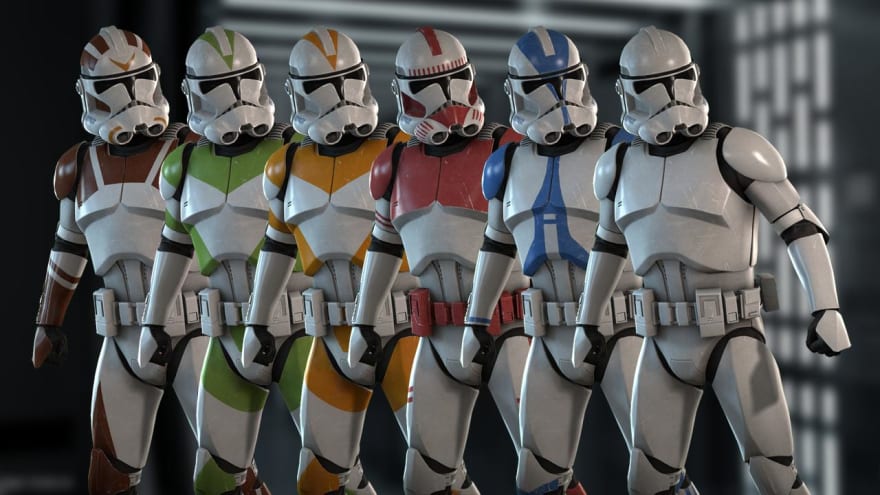 Have you heard about CAP theorem? The simplest possible description of it - there is no way to create the ideal state management.
The Ideal State consist of:

We don't have any problems concerning Availability with any clientside state management. Still, we do have problems with Consistency and Partition tolerance. It doesn't matter what you are going to write, or just written - as long as the write would be performed in the future there is no "read" command. You have only what you already have in local closure, and that's "the past".

And I do have a good example for you:

code is always the best way to explain

Is everything all right? Definitely is, except a single point. Probably you shall reset page on a term update. It should work that way for a "new" search - start from the beginning.

So, what will happen when you update searchTerm?

So - one change to props, 3 or 4 🖼 renderings of a component, 2 data fetches, one of which is incorrect - with new searchTerm and old page. Table flip!

This is the same Achilles and the Tortoise case, when one update (page) was trying to reach the other (searchTerm), but the other is also moving.

Everything is broken. We went a few years back in time.

@DavidKPiano @AdamRackis I remember teaching Flux in our @ReactTraining workshops back in 2015 and specifically demoing stuff like this and saying "look! all those weird race condition bugs are solved!" We even handled async errors that occurred after I/O. It was beautiful. And now we have this.

NOT FUNNY, probably there was a good reason to use Redux. And well we all were asked to use Redux as long as it is "correct" and helps get shit done "right".
Today we told not to use it, but due to other reason. Like it's too global.

Long story short - there are 2 ways to solve our problem.

1. KILL IT WITH FIRE

Or set the key to remount component, and reset it to the "right" values

As you might have seen in our blog post today, the easiest way to reset the state of all components below (e.g. in a form) is to give a new key to the top element. reactjs.org/blog/2018/06/0…


I would say - this is the worst advice ever, as long as you are going to lose everything - local state, rendered DOM, everything. However, there is a way how to make it better, using theoretically the same key principle

This time our loading sideEffect would be called once, even with the "right" values provided.

From some point of view - we are just shifting effect in time...

Just accept the game rules, and make them play on your side

The case is closed? Well, no - this pattern is not applicable if you have many variables. Let's try to understand the root problem:

To PUSH or to PULL?

Another name of this problem is a Diamond Problem, which is also bound to Push or Pull variant of state update propagation.

Problem with PULL - no "exact change" notification, every consumer has to pull by its own. This is why you have to use memoization and libraries like reselect.

Problem with PUSH - if there is more than one change - consumer might be called more than one time, causing temporary inconsistencies as well as DejaVu. 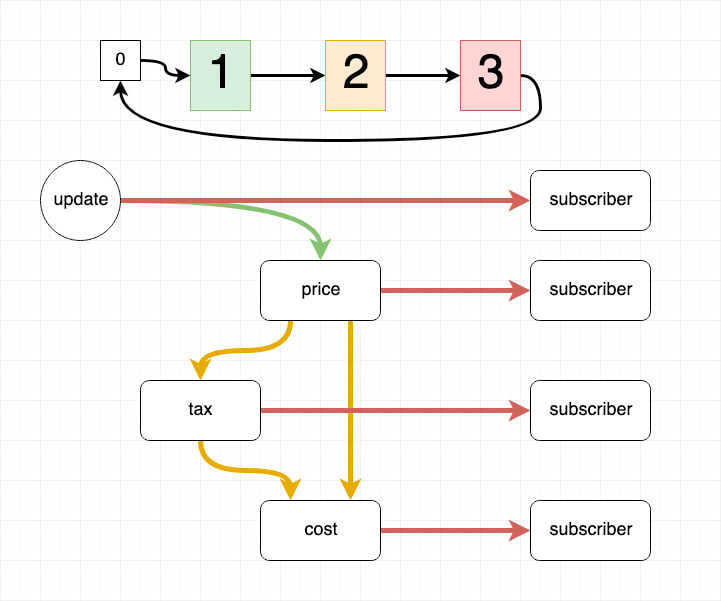 This a cost caclulator, with a cascade update caused by a PUSH pattern. Let's reimplement it with hooks:

this was PUSH, and now let's rewrite it with PULL.

Caching versus Memoization - we are deriving data, one from each other, in a synchronous way, which is a PULL pattern, and the result is free from the problems above.

However, there is a problem - exactly this example solves the problem for the calculator example, but not for our paginated search.

However, ... let's try to solve it yet again

It's not fixed. It's shifted - we have normalized state update propagation speed - values are updating in the same time.

Yet another way to solve this problem - is to change the way we dispatch the "side effect".
Speaking in terms of redux-saga - then "the State" dispatched multiple events you might takeLatest, ignoring the firsts, or takeLeading, ignoring the following.
You might also know this as debounce. I prefer to call this as Event Horizons, or event propagation boundaries.

Any (any!) example here could be "fixed" by delaying the loading effect, and actually executing only the last, the "stable", the correct one.

This is a very important concept, allowing batching requests and various optimizations - just accept that any asynchronous call can take a time, especially network requests. If you delay them by a few milliseconds or even CPU(or nodejs process ticks)... everything could become a little bit better.

However, keep in mind - adding any timeouts and other asynchronously to your code is making it harder.

2. React is a subject for glitches

With different hooks updating independently you may, and will get temporary inconsistencies within a single component, leading to the (temporary)undefined behaviour or even (temporary) broken state.

The problem is bound to hooks, as long as you have to render a component to the very end, and could not "bail-out" if some useEffect is supposed to synchronize states.

The problem is bound to the Caching and Memoization, which are differently affected by the CAP Theorem - only memoization would not cause tearing.

glitches are causing re-renders, and slowing your App

(surprise​!) ClassComponents have got componentDidUpdate as well as getDerivedStateFromProps making complex state updates more handy. You just able to update them as ​one thing, without extra re-renders.

Please don't forget about classes - they could help a lot!

Redux is PULL, Redux is doing many small state updates as a response to a single dispatch, Redux could batch many state updates in one, resulting a single React render, making broken states impossible.

Redux is awesome. And, let me be clear, less fragile

5. Be aware of the problem

Just don't "trust" any single solution. I was quite pathetic​ in my attempts to solve some state problems with hooks, until I've accepted - there no is such thing as an ideal tool.

Hooks are not ideal

6. And it might be not a problem at all.

Yes. It's not a problem almost always. You might never face the terrible stories I've told you above.

... but, let's face the truth - state management is, and always will be a very complicated beast...

If you agree, as well as if you disagree with this - here is attempt to "document" all edge cases for different state management systems:

This repo is intention to describe and formalize state-management edge-cases.