Thank you to Elizabeth Mattijsen who helped to proofread and with advices.

In this first blog post in a serie of two, you will find a general introduction with some community insights and details about interpreter and VM (Rakudo and MoarVM).

In a second part you get a long description of the Raku features to discover why Raku is worth talking about and learning.

(Next blog post is about past implementations and history details)

Raku is a programming language powerful and mature that was difficult to implement (which will be described in the second part of this post).

Lately, Raku has become too different from Perl 5 that we can simply say "Perl" to designate Perl 5 (or Perl 7) and we would prefer "Raku" in any circumstances to talk about Perl 6. There was a time where Perl 6 community was slightly against this renaming, but the overall opinion changed and the renaming was done smoothly between 2018 and 2019 (see next blog post of the série for more details).

You can follow Raku news by subscribing to the newsletter Rakudo Weekly News.

Raku has a small community but some "killer apps":

Before going into details of renaming and Raku versions, let's hightlight some past and present big contributors to Raku:

Not all are still active and the list is not exhaustive!

The Raku community decided recently to setup a steering council.

The most advanced implementation of Raku is Rakudo (interpreter) with NQP (builtins) on MoarVM (virtual machine).

When Rakudo is released, the bundle Rakudo + MoarVM is called Rakudo Star (or Rakudo *) ⭐

Since 2015, the implementation of Raku is "features-complete" and the effort on the compiler and VM are more about fixing issues and improving performances.

Raku had multiple official releases (the most important being in 2015) :

From where comes this versioning scheme?

Simply from a recurring joke about the release date of Raku. It was common to answer "will be ready for christmas" 😀

Before going into language details, here are some books to help you learn more about Raku:

The technical details starts here, I hope you're ready 😀

The power of Raku

Raku features are impressive, I wanted to start by this :)

For more technical details, here is the Raku glossary and also a features comparison between the compilers (it gives a good overview of the language). In the coming paragraphs, the Raku features are explained more in detail.

Courses like courses.raku.org or raku.guide are probably good "showcases" of Raku features.

Constraints + coercion ("I want a string object and I cast into integer object"):

Or conditional constraints ("my argument should be an integer object or a string object"):

The dispatch is based on the number of arguments, their types, the constraints (we can even play with it with functions nextsame, nextwith, callsame, callwith).
See also "Proper narrowness analysis" for the best candidate resolution.

A full toolbox to handle asynchronous, parallelism and concurrency :

Ability to define our own operators (seen above) and features. The meta object programming is partially handled in the virtual machine:

Unicode processed at the grapheme level

Very high level of Unicode management, in particular thanks to primitives in the MoarVM virtual machine.

The language operators themselves can be UTF-8 (like the ones you create).

The first major version of Rakudo Star (or "Rakudo *") was based on Parrot (PCT + ParrotVM), but we will ignore this version to focus on the current implementation (Rakudo + MoarVM).

Rakudo is a compiler for Raku that implements the entire language and can target several different VMs (the main one being MoarVM). Most of Rakudo is written in "simplified Raku" (NQP). Rakudo also implements precompilation to optimize its performance. In addition to that, Rakudo improves the syntax tree using several optimization methods, here are some examples:

NQP is a compiler like MiniPerl for Perl 5. It is a bootstrapping tool which helps to compile the Raku parts of Rakudo and compile the libraries before running have compiled the libraries. Unlike MiniPerl for Perl 5 (which is an interpreter that can interpret all Perl syntax but miss some batteries: means without modules mixing Perl code and native code), NQP can only compile a "simplified Raku". NQP refers to both the compiler and the source code contained in files with the ".nqp" extension.

NQP is part of Rakudo and seems inspired from MiniPerl6/KindaPerl6.

MoarVM stands for Metamodel On A Runtime VM (official site). It's a registrers-based virtual machine like Parrot. Jonathan Worthington is the founder and architect of MoarVM.

Here are some features of MoarVM:

I also recommend reading this introduction to MoarVM.

Implementation based on Rakudo + MoarVM (since 2012)

MoarVM does not have an assembler.

Below is another architecture diagram taken from a presentation on Rakudo/MoarVM optimizations (2014): 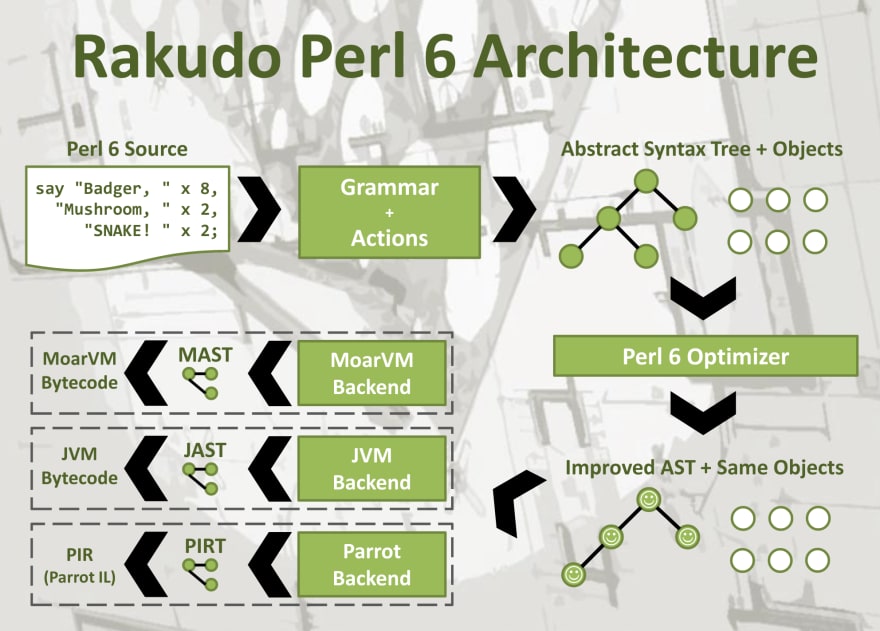 I hope it gave you the envy to try it 😘

It took me a lot of time to gather these traces of a dead world, but believe me it's very interesting so just let yourself be guided!

LOC is an important metric to measure developer productivity

🧵 Is Carbon really the next C++