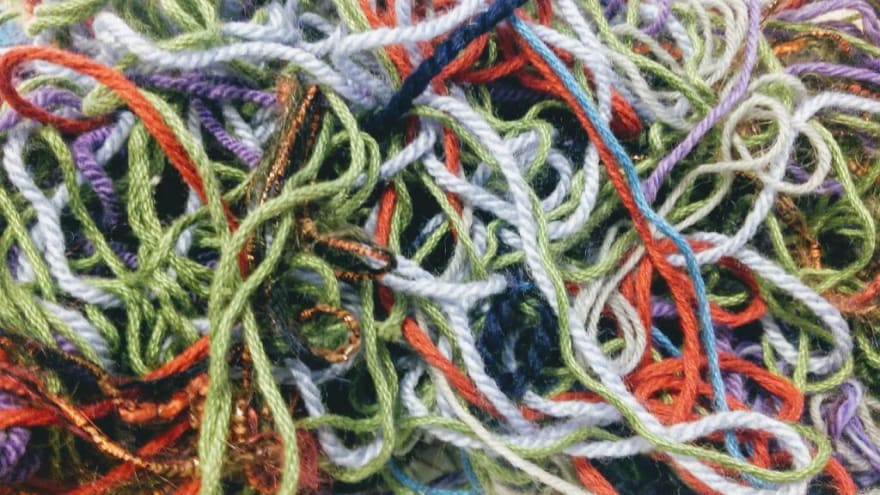 Thank you to Elizabeth Mattijsen who helped to proofread and with advices.

The history of Raku

The history of Raku interpreter and virtual machine is really not straightforward... If you've heard about "Parrot", "PIR", "PASM", "Pugs", "Rakudo", "MoarVM", "NQP", "Rakudo on JVM", "Rakudo on Parrot", "Mildew", "Ponie" but you're lost with all these implementations then this blog post is made for you!

I made researches 🔍 to clarify all historical and technical (!) details and gathered all the results here, with several homemade and original sketches to make it crystal clear for you. 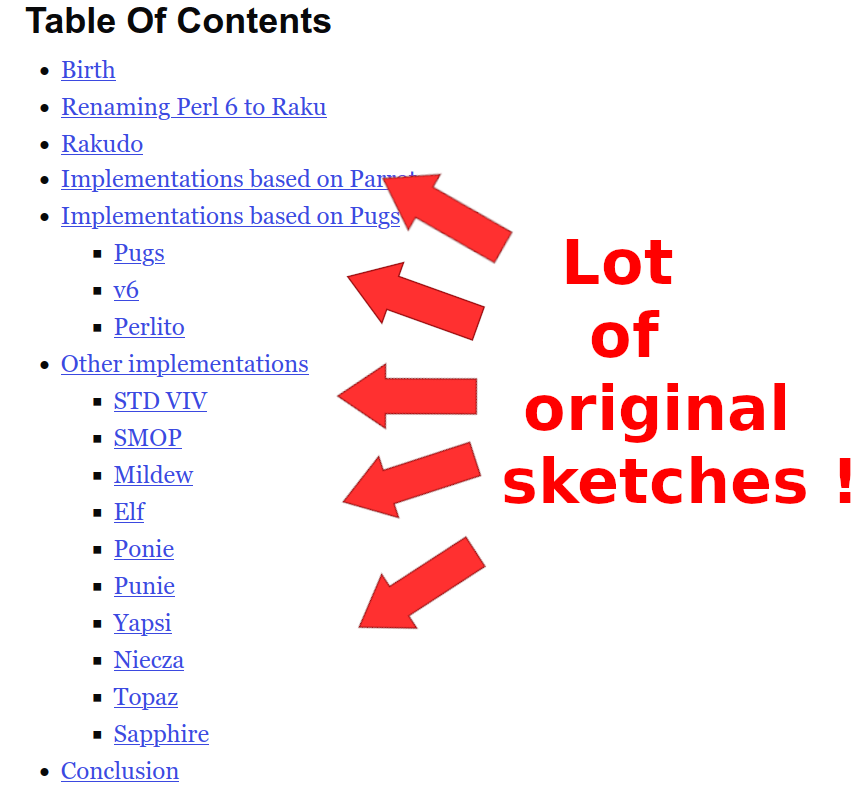 The birth of Raku

Raku is born on 18 July 2000 from a famous event where John Orwant threw coffee mugs against a wall during a meeting.

A programming language that changes its name... it does not happens often!

Recently, Raku celebrated its second year (or its 21 years). Here is how the renaming happened:

The renaming process in links:

In this second part, I will detail the past implementations of the Raku language. Get ready, acronyms are coming! 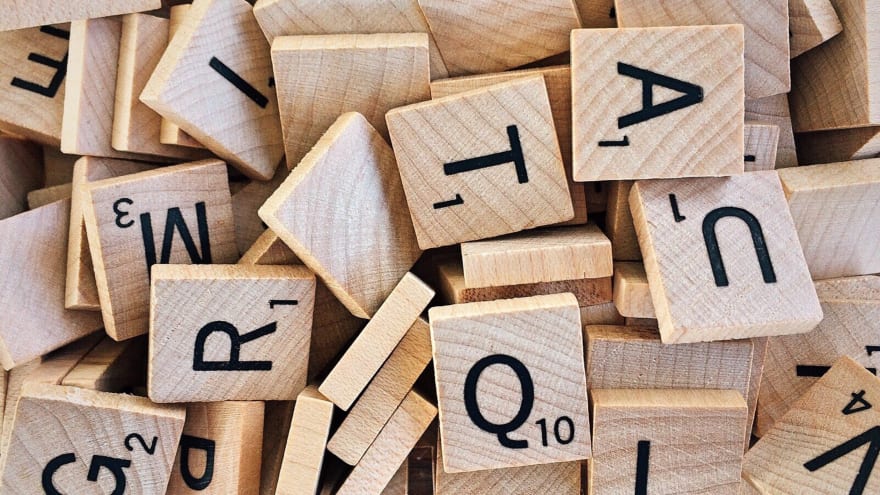 Initially it was decided that no implementation would be defined as "official" for Raku but rather that "Raku is something that passes the official test suite". In fact, since 2012 there is an official de facto implementation which is Rakudo + MoarVM.

Before that, there was the Parrot framework (2002-2012) as well as Pugs (2005-2007) and various other compilers and runtime environments (Mildew, Niecza, Yapsi…). This technical and historical part will be discussed at the end of this dispatch. But let's go back to talk about the beginnings.

The very first announcement of the creation of Raku dates back to July 19, 2000. Larry Wall's idea was to make it an ultra-community project right down to the language design, so he would start by asking to contribute to the specifications. It resulted in 361 RFCs, , from which Larry Wall produced apocalypses, which where then explained by Damian Conway in the exegesis , and then later further detailed in the synopses.

Links for historians or the curious:

Created in 2002, the framework and the Parrot virtual machine have long been central to Raku's implementation (this is no longer the case today). Parrot was born from an April Fool's Day announcing the unification of Perl and Python and even the upcoming release of a book on the subject:

Why build a new VM?

Parrot offers much more than a virtual machine, Parrot is a language creation, compilation and execution framework. This framework makes it possible to build high level languages ​​(HLL) easily and quickly. It has been put into practice by Rakudo for a long time.

PCT stands for Parrot Compiler Tools. Its purpose is to enable the creation of a compiler and a high level language execution environment (HLL).

PCT is written in PIR (see assembly section below).

PAST stands for Parrot Abstract Syntax Tree: internal representation of a syntax tree.

Originally called P6GE, PGE stands for Perl Grammar Engine. Based on HLLCompiler. A PGE rule looks like this:

PGE was used by Pugs, another Raku compiler (see below).

PACT stands for Parrot Alternate Compiler Toolkit. An alternative to PCT because PCT was considered too limited.

PASM stands for Parrot assembly language (PASM). The low level code ready to be converted and executed by Parrot VM. PASM code looks like this:

IMCC stands for Intermediate Code Compiler. It is an alternative tool for creating and running Parrot bytecode

IMCC brings its own language, commonly known as Parrot Intermediate Language (PIR). IMCC embeds the Parrot runtime environment, so IMCC can compile from PIR to PASM, then from PASM to PBC, then execute this bytecode. IMCC can also do optimizations, although it doesn't by default.

First called IMC, PIR is an overlay of PASM without being a language of high level. Files containing PIR code have the suffix ".imc"

You can learn more from this IMCC intro or this article on how to write PIR. See here PIR examples or even the detailed documentation of FR mongueurs on PIR.

PMC stands for PolyMorphic Container or Parrot Magic Cookies (the way of representing data in the virtual machine).

The Parrot VM is a registry-based virtual machine, which is not the "standard" (eg JVM).

Here are some features of the Parrot VM:

It's easy to include Parrot in C code or call C in Parrot (Native Call Interface).

Or with a merged IMCC and Parrot stage (later because IMCC contains Parrot):

Below is an even more detailed/technical diagram (taken from Parrot documentation): 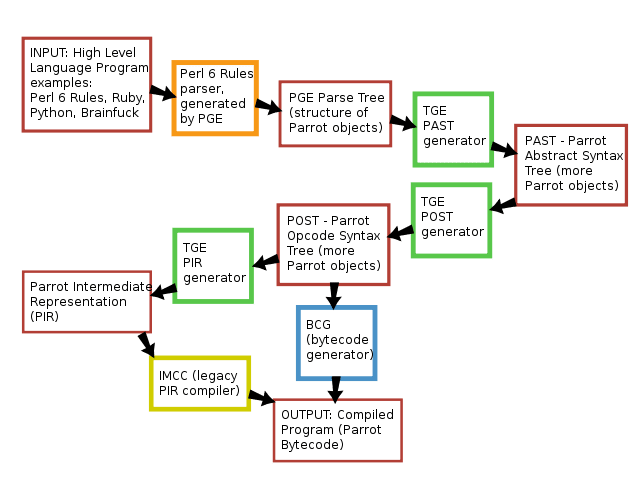 Many details are available in the Parrot Design Document

If Parrot was initially at the center of Raku, this has changed over time:

Little by little, the Rakudo compiler has freed itself from Parrot and is now targeting a new virtual machine.

From here we start archeology, the real one 🔍

In his short existence, Pugs explored many architectural choices. Pugs refers to the interpreter, compiler, runtime environment, and test suite. The compiler can compile to Haskell, JavaScript, Perl 5, or PIR (for Parrot, if you remember). 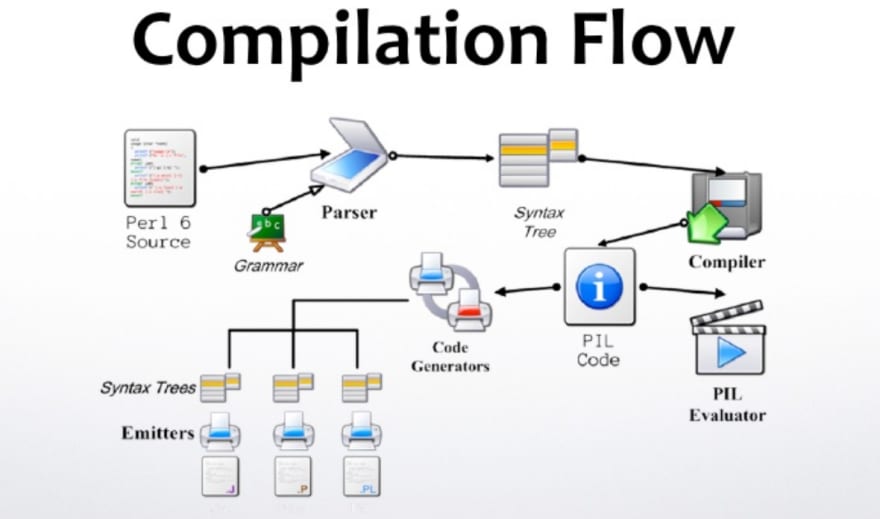 Pugs is written in Haskell and falls dormant after 2007.

Here are the concepts of builds around the Pugs implementation.

Pugs::Compiler is a set of Perl 5 modules for compiling Raku.

Was part of Pugs but in a separate directory. MiniPerl6 became KindaPerl6 then Perlito6.

KindaPerl6 or KP6 is a Raku implementation of the Raku grammar with a bootstrap in Perl 5. KindaPerl6 is built from MiniPerl6.

PIL stands for Pugs Intermediate Language. PIL is not a human readable format but rather an abstract syntax tree internal to Pugs.

PIL-Run was built on top of a set of Perl 5 modules that read and run PIL. PIL-Run was Pugs' back-end in Perl 5... at the start.

The compilation to PIR is done in two stages, small zoom on it:

v6-pugs then v6-alpha and now v6.pm is a complete rewrite of Pugs, using a mix of Raku (Pugs::Compiler and associated modules) and Perl 5. It reuses code from the runtime environment of PIL-Run and "half of the CPAN" 😀

Now v6 is released in Perlito6. v6.pm is the front-end for Perlito and Pugs in Perl 5.

One thing he can't do is translate from Perl 5 to Raku.

MiniPerl6 and KindaPerl6 form Perlito6. Perlito5 is a port of Perlito6 to Perl5. It is "Perl 5 implemented in Perl 5". Perlito5 itself is written in Perl. Perlito6, on the other hand, is written in Raku.

Perlito only implements a subset of Raku called the "useful subset" which:

This "useful subset" is kind of similar to NQP (see previous blog post for details about NQP).

In this part, I will continue my tour of initiatives around compilers, runtime environments, and legacy virtual machines.

STD and viv are works of Larry Wall.

We find in STD the grammar of Raku… written in Raku (which did not have a compiler at the time! 😏 It's the beginning of the bootstrapping problems 😀

VIV or literally in Roman numerals "VI → V" (and therefore "6 to 5") was a module capable of converting from Perl 6 to Perl 5.

SMOP is not a virtual machine but a runtime environment that resembles that of Perl 5, while having functionality to manage Raku.

Mildew was an STD to SMOP compiler.

It directly uses the STD grammar.

Elf was a compiler written in Raku with a Ruby grammar. It could issue Perl 5 or Lisp. It was never completed. It was expected that Elf could target SMOP.

Ponie stands for Perl On a New Internal Engine. This involved running Perl 5 in the Parrot virtual machine. Stopped in 2006.

Punie (direct reference to Ponie) was a Perl 1 compiler to Parrot.

Yapsi for Yet Another Perl Six Implementation is an implementation of the compiler and its Raku runtime environments and virtual machines in Raku.

Niecza is a Raku compiler written in C# that targets CLR (Mono).

Topaz was a Perl 5 core rewrite in C++ started before Perl 6, finally abandoned.

Sapphire was another rewrite of Perl 5 internals in September 2000, shortly after the announcement of Perl 6. More experimentation than something else.

There are many interesting concepts to be found in Raku as well as in its history and the history of its implementations (although most of them are part of a vanished world, they well deserved a little closer look).

I hope that this long blog post has been able to lift the fog around the twists and turns of Raku's implementations, its history and to highlight the concepts of the language.

You shouldn't need to watch videos or lessons to learn something

How do you test and find bugs in an application?

Prefixing variable names with 'is'