Welcome all readers, Nowadays everybody uses a Smartphone. A Smartphone not only encompass the hardware, that makes it superb but also, the mobile apps to most of the user spends time with. Earlier these apps were made with android, or Swift. Any application build with either of the Framework, is known as native apps that intends to be operate on the particular platform either android, or iPhone. So if any user intended to launch any app on number of platform, He had to create app with different language for different platform. But, this problem was eradicated by the Hybrid apps, that targets number of platform and consumer simultaneously without adding overhead to developer community of learning multiple Language. Mostly these apps were build with React JS which is a javascript. It's reduces a lot's of headache but one have to learn Javascript and will consume your precious time.

A person who is a Web backend developer who usually spends lot's of time doing and putting things in action with PHP have to follow the steep learning path, that is more brainstorming an mostly needs sleepless nights to do that. But there's a good news, You can build applications with the PHP also. You might be shocked. Yes, Now no more sleepless nights, Let me introduce your life saver.

KikApp is a framework that allows the creation of mobile applications on platforms including Android and iOS from a single PHP codebase. Kikapp is a framework to develop native mobile apps based on PHP. This tool interprets the language, translates the code and exports it to the market’s most popular platforms.

Who can use it?

Any developer who is interested in making apps in the most commonly used language for web development.

PHP is among the most popular language for corporate web development today, It is the most frequent choice for the back end of cloud applications. Now a days 8 out of 10 decision makers using PHP confirmed that it lets their teams develop faster compared to other languages, and that PHP provides the easiest choice for the development of cloud apps.

1.Simple: There is no need to learn new languages, like Java or Objective C to create native apps.

2.Powerful:Based on a simple and powerful language like PHP.

3.Support:You will use a Framework that offers a wiki with lots of documentation, examples, and tutorials.

KIK framework offers all you need to create native mobile apps—all from a single PHP code base.

Based on a simple and powerful language that you already know.
Apps Better, Faster

There is no need to learn new languages, like Java or Objective C to create your apps.

A native app has better performance because it takes into account the use of the device. It is not just a web which adapts to a mobile. Within a native app, the users’ experience is totally different. It relates to how the app interacts with the device. From a native app, the user has a different way to access the devices’ resources. If anything determines the success of e-commerce,job portals or you can make your own business product depends upon your idea. it’s the user’s experience and the evolution of its demands.

You can choose between command line tool and Eclipse-based plugin, publishing apps has never been simpler. 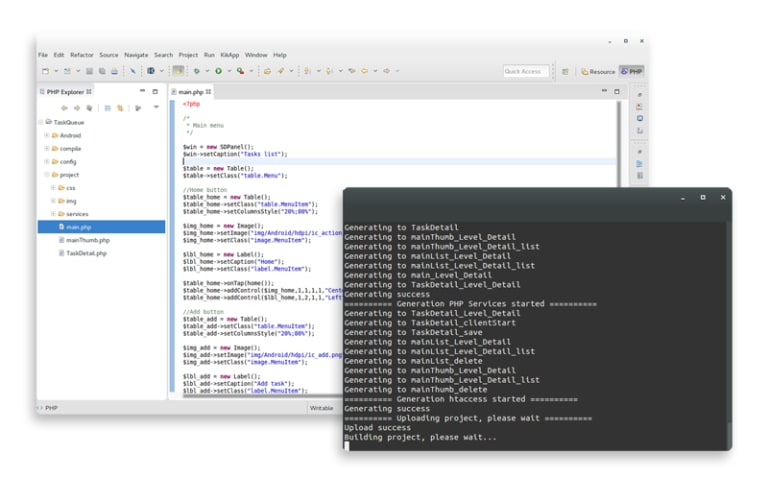 That provides a simple environment to rapidly build, run, and publish mobile apps across multiple devices and OSs.

CLI is a set of command line tools that provides many capabilities such as, create, analyze and run apps.

At last I would like to add that never constraint any language or frameworks in the path of Learning, due to its syntax or capability. It's the developer who raise above from the reason of counting number of zeroes in his bank balance and want to solve the problem which everybody is facing through his learning and innovate something new which enhance the capabilities of the language. Learn everything with love.

Adding config parsing to a ssg

Could not access to the React Bootcamp course (already paid)

Evolutionary from Batching to Streaming

Gaurav
Learner, Detective of my Own Crimes(Debugger), Web App Developer, as Well as Blogger @ https://tekraze.com
Please, comment your code...
#productivity #discuss #tutorial #vscode
Why "Do Your Own Research" is terrible advice
#career #money #healthydebate
Stop saying "Stop using Else" and other nonsense! ...
#beginners #career #codenewbie

Once suspended, thisisrgaurav will not be able to comment or publish posts until their suspension is removed.

Once unsuspended, thisisrgaurav will be able to comment and publish posts again.

Once unpublished, all posts by thisisrgaurav will become hidden and only accessible to themselves.

If thisisrgaurav is not suspended, they can still re-publish their posts from their dashboard.

Once unpublished, this post will become invisible to the public and only accessible to Gaurav.

Thanks for keeping DEV Community 👩‍💻👨‍💻 safe. Here is what you can do to flag thisisrgaurav:

Unflagging thisisrgaurav will restore default visibility to their posts.