When building a web application, there's something you absolutely need to take into account: performance. Your app may be greatly designed or have some killer features, nobody will use it if it's not performant. Users are not patient. But how can one make an app more performant? Well, the less your browser has stuff to do, the faster it will be, right? Then, a great strategy to boost your app performance is to give the browser less work, that is to say, reduce the amount of stuff to load. There are easy ways to do so, and we'll take a look at three of them today.

This is the easiest thing and one of the most common mistakes you can find out there. When integrating images on an app, you've been told to use the pictures with the highest resolution to have the best quality images. That's great. What you haven't been told is that the images you use from Unsplash or Pexels often have huge dimensions and are not meant to be displayed on smaller screens.

It's like watching a 10GB 4K movie on an old tiny computer. 4K or not, you won't see many differences. That's the same for images on a website. Thus, you must reduce the quality and resize the images to make them smaller.

There are plenty of apps that allow you to do so, like squoosh.app. For example, you can find below an example of an image whose size was reduced on squoosh: 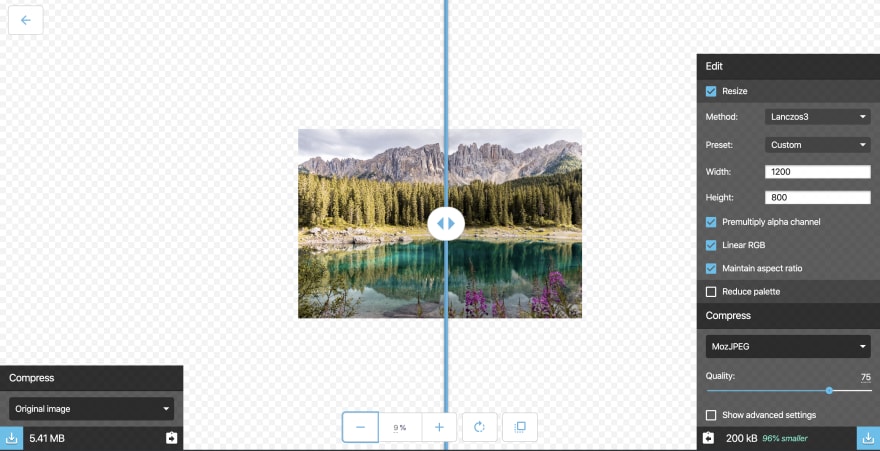 Sure the image on the right is a little bit blurry and less detailed than the one on the left, but at this zoom level, it's still looking good to me, and it's also 96% smaller, which means your browser loads 5.2MB less.

If you're building single-page applications (SPA) with client-side rendering (as with create-react-app or Vue CLI for example), this tip will also boost your app with little efforts.

In fact, client-side rendering means you are basically fetching on the server a bare bons HTML document with a JavaScript file (called a bundle) containing your whole application logic. This approach makes your app longer to load initially but richer in terms of interaction and route changes. It's a problem since a long initial load will be badly perceived by your users.

In fact, you will ship to the client this big JavaScript file even if your users don't need to use every features of the application (typically a settings page when you can change your name or modify your password).

To solve this problem, you can use code splitting: “lazy-load” just the things that are currently needed by the user (according to React's docs).

One common strategy is to split your code based on your different routes. Let's take the example of a fake store app:

With that approach, if the users want to browse your products, they won't need to load the code associated with the Cart or the Settings page.

It can make your initial load way faster by saving hundreds and hundreds of KB. Especially if your other pages use heavy third-party libraries, which brings us to the third and last point.

A few months ago, I worked on a side-project and tried to load my app in a slow 3G mode. I found it really slow, and I thought something must be going wrong with the bundle. I installed a tool to analyze the bundle (we'll see which tool later, don't worry 😉). I found a pretty big package in my bundle called moment-timezone though I never installed it. I didn't understand why since timezones were useless to my app. Turns out I was using a time picker that needed moment-timezone, making it included in the bundle! So, I chose another time picker, and my app was 2x faster if my memory doesn't play tricks on me.

I'm convinced every developer working on the front-end side already had or has this problem. Then I'll show you a method to make your bundle lighter.

A great tool to do so is webpack-bundle-analyzer or source-map-explorer for Create React App users. I'll show you an example with CRA here. There are few steps to follow:

This will run source-map-explorer on the JS files generated by npm run build.

Note: Alternatively, you can find all the steps on Create React App docs.

By running the script on one of your projects, you should get something similar to that: 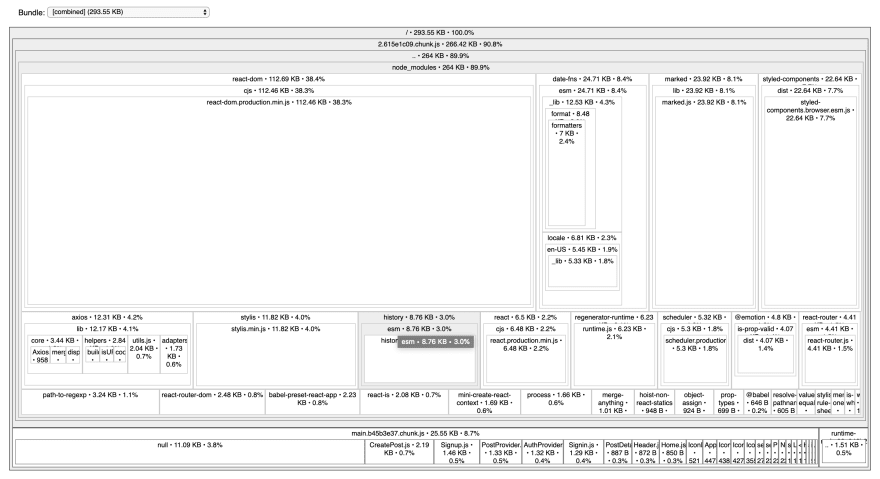 You can see in the results that the bigger a dependency is, the more it takes up place visually. That's a great way to spot the heaviest dependencies.

I ran source-map-explorer on a small project so you can see the bundle is not that big in my case. You'll likely get a heavier bundle and more dependencies on bigger projects.

Then, get rid of heavy dependencies

Once you have the results, it's up to you to see which dependencies are the heaviest and decide if you must find alternatives for them. To find the package's cost in your bundle, I recommend bundlephobia. It's great for comparing packages cost and making you wonder if you really need to install that dependency.

For example, I used to use moment.js for date manipulation. But it has a pretty high cost on your package: 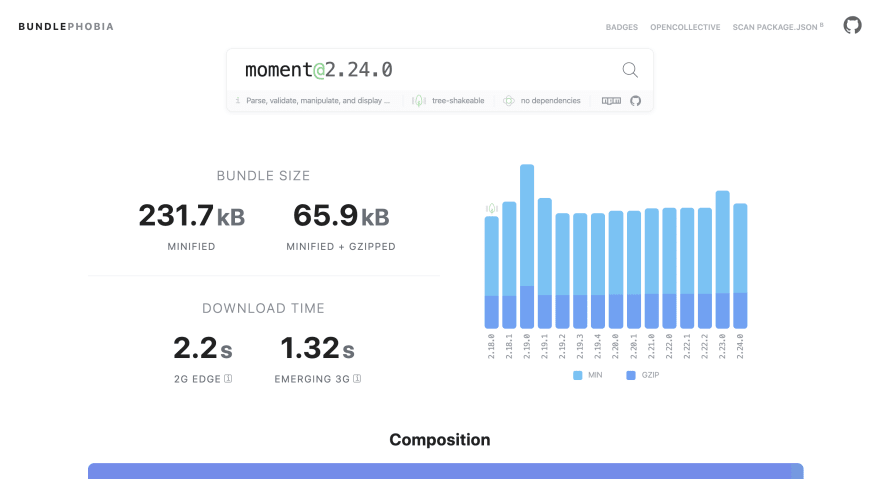 In fact, moment is not modular. If you need to manipulate dates, you need to create a Moment instance that gives you access to many methods even if you use just one or two of them.

Now, I use date-fns which is way more modular and lighter too: 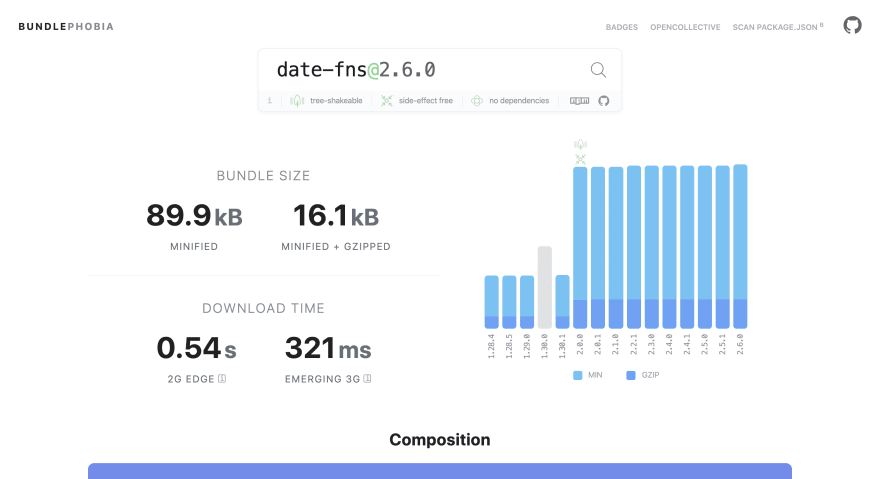 You can follow the same logic for a lot of dependencies. However, be pragmatic when making these choices:

I hope these three tips gave you the will to optimize your apps (and create more stellar experiences for your users!). Of course, there are plenty of other performance tips like:

I highly encourage you to explore all these options and see what they can bring to you performance-wise. However, don't be obsessed with that. When it comes to building apps, there are always trade-offs. Weigh the pros and cons of your choices 😉

Once suspended, thomaslombart will not be able to comment or publish posts until their suspension is removed.

Once unsuspended, thomaslombart will be able to comment and publish posts again.

Once unpublished, all posts by thomaslombart will become hidden and only accessible to themselves.

If thomaslombart is not suspended, they can still re-publish their posts from their dashboard.

Once unpublished, this post will become invisible to the public and only accessible to Thomas Lombart.

Thanks for keeping DEV Community 👩‍💻👨‍💻 safe. Here is what you can do to flag thomaslombart:

Unflagging thomaslombart will restore default visibility to their posts.