Although version 6 of Laravel was released in September 2019, there is still some confusion in the community about the new versioning standard and the feeling that things are going too fast.

Since I have been using Laravel for some time, I am used to the release cycle, and I would like to explain here what has changed, and why you should not be concerned.

Well, first, I will leave here the official statement of the change:

As I highlighted in bold, the versioning cycle has not been changed. New versions with potential breaking changes have always been released every six months and will continue to be released in that period. In practice, nothing has changed.

The only thing that has changed is the way the numbers are presented. Before, the “major” number (The first number) of the version was not changed even with “Breaking Changes”, as you can see in the image below: 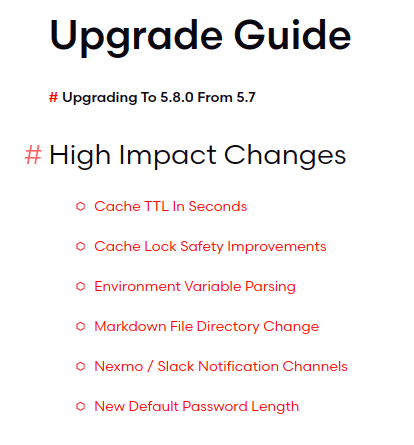 So, even if they had high impact changes, Laravel was still in version 5. See how many high-impact changes were made in the Upgrade from 5.7 to 5.8:

As seen in the official statement, the decision was taken to adopt semantic versioning so that there is consistency between Laravel and many of the packages used. In addition, semantic versioning demarcates version cycles well. With the previous model, you always seemed to be on Laravel 5, even if there were high impact changes.

That's basically it ... if you get the feeling that things are going too fast, just remember:

It is going at the same speed as always, with new versions being released every six months.

I hope I helped to clarify the matter. Cheers!

Did you like this post? Consider following me on Twitter to stay on top: @Tiago_Ferat (I will be writing constantly now, and I will also be launching tools for the community regularly)

8 Essential Questions to Ask Before Using a Laravel Package

Once suspended, tiagosilvapereira will not be able to comment or publish posts until their suspension is removed.

Once unsuspended, tiagosilvapereira will be able to comment and publish posts again.

Once unpublished, all posts by tiagosilvapereira will become hidden and only accessible to themselves.

If tiagosilvapereira is not suspended, they can still re-publish their posts from their dashboard.

Once unpublished, this post will become invisible to the public and only accessible to Tiago S. P Rodrigues.

Thanks for keeping DEV Community 👩‍💻👨‍💻 safe. Here is what you can do to flag tiagosilvapereira:

Unflagging tiagosilvapereira will restore default visibility to their posts.