Norbert’s mug starts overflowing with coffee. He rushes over to the sink to grab the Coffee Towel. Jenell watches him over her own cup of coffee, sipping gently.

“Ugh, this stupid machine! When are they gonna get this fixed?” After wiping down the machine and mug, Norbert carefully takes a sip, wincing.

“Let it cool down a bit, Norb,” Jenell suggests.

Norbert takes another sip, wincing again. “No, it’s just...they need to clean the lines. It’s nasty.” He gulps down a bit more, then reaches for the French vanilla creamer sitting nearby.

The office is quiet, except for a lone mechanical keyboard clicking away and the whirr of the HVAC, which building management allowed them to run for a bit longer than normal.

“Norbert, if it’s that bad, toss it and start over.” Jenell chugs the rest of her coffee without complaint. “Or, lower your coffee standards. Our servers need caffeine-fueled humans to ensure they’re configured correctly, and us devops folks can’t wait around for Cocoa Connection to open to get quad-shot skinny mochas.”

Norbert puts the creamer away. “Look, if I’m gonna get wired, I’m gonna do it right. Your little YAML configs can handle crappy coffee, Jenell. My code enjoys the finer things.” He grins.

This type of response used to bother Jenell a lot, but now she smiles and shakes her head. “Bad coffee or not, this feature needs to ship so we can all go home.”

Norbert and Jenell walk up to the clicking. Surrounded by cans of diet soda and packs of cheese crackers, headphones on and glowing green, Domencia is completely focused. She’s illuminated by the blue glow of her laptop screen and the rainbow backlight on her keyboard. Peeking at her screen, Jenell can see that Domencia has almost cycled through one of her “focused work” playlists

Norbert looks quizzically over Domencia’s shoulder, thinking. Jenell leans back against an opposing desk. “So, you learning a lot from Domencia?”

Norbert watches the code fly by. Code and tests. Norbert leans back next to Jenell. “She’s not even being sloppy about it. Well, not this time, at least. I think I learned more from reviewing one pull request from her than I did my entire first semester in college.”

Domencia stops typing suddenly, takes off her headphones, and stretches her arms up. “Well, that stupid feature request is done. Sorry, Norb, all you get tonight is a code review.” Domencia swivels and looks at Norbert. “Here’s another lesson—if a customer promises another customer that a third customer can do a thing with the project you’re working on, and they give you a week to do it, just, like, delete the whole thing. It’s idiots all the way down from that point.”

Norbert chuckles. “Yeah, that product meeting was rough. You could see ’em sweating when they asked if it could be done.”

Domencia stands, swiveling her neck around. It cracks a few times. “Well, the review is up. I found something else I think we can tackle tonight while our esteemed devops liaison is gracing us with her presence.”

Domencia sits back down and motions Norbert over. “Here, look,” she says, pointing to an open file on the screen.

“Whoa, the version of mochurl we’re using is ancient,” Norbert exclaims. The beeping of a snow plow and the flashing yellow light through the windows punctuate his statement. “I’m surprised this hunk of junk could even function.”

“Sounds like the snow’s starting,” Jenell says, looking into her mug. “Let’s get going soon, before we get stuck here.”

Domencia points at a few other lines. “We should be able to upgrade to the latest version and maybe drag along some other deps, too.” She taps at her keyboard and a browser appears. “Look, the mochurl API seems to be the same. Worst case scenario we tweak a few tests and we’re good.”

Jenell taps her mug. “Well, I’m all about reducing risk. I don’t want to sleep under my desk, though, so if it’s too big, delay it until Monday.”

Domencia salutes. “YES, SIR, I will execute to the best of my abilities.” Jenell rolls her eyes, shakes her head, then heads over to the coffee maker for her next cup.

Norbert pulls up a chair. “It’s been really interesting working on this legacy project. So many issues I never had to deal with at the last place.”

“Only working on greenfield projects makes you soft, Norb,” Domencia responds. “Real coders are forged in the hells of nine year old legacy apps, like this thing.” She types a little more, then purposely hits the Enter key on her keyboard just a little harder. “Looks like a few binaries need to be rebuilt. Time to relax a bit.”

Jenell returns with a fresh, steaming cup. “Yeah, you see all sorts of weirdness with legacy apps. I once worked on a project that had a very...peculiar...deploy process.” She sips. “I was nursing a Halloween candy hangover in 2015 when I got a page at 2 a.m. A developer decided to get his late night code on and did a deploy, and, like, everything exploded. Turns out we were using some tool in the chain that had no concept of Daylight Saving Time, and…”

Domencia pfffts. “DST is a jerk. I’d move to Arizona if it means never dealing with it—” She motions to the window, now full of white flakes. “—or with that.”

Domencia’s laptop beeps. She gives it a quizzical look. “Hrmm…”

“What is it, Domencia?” Norbert leans in closer.

“I can upgrade mochurl, but there’s a transitive dependency that I can’t upgrade due to conflicting requirements…” Domencia pokes at her keyboard. “There, we were using it, too, and now I’ve changed out requirements to match the dep’s. Again!” She slams the Enter key once more.

“Ugh, it’s etheda this time.” Domencia types some more. “OK, we’ll upgrade that to the latest version, too…” Another Enter key, another beep.

“etheda requires...a version of mochurl that’s lower than the latest. But I guess the new mochurl requires a version of globench that is higher...but…it’s like a big, nasty cycle of dependency requirement mess.”

Domencia cracks her knuckles. “I got this. You know how git bisect works, right, Norb?”

Jenell pulls back. “Domencia, the snow’s getting bad, let’s save this for Monday.”

“Nope, I can do this. Go indent some YAML or something and let me work.” Domencia puts her headphones on, starts a new album playing, and begins typing. Her headphones start glowing green.

Norbert looks at Domencia’s laptop, then outside at the increasing snowfall. “A John Carpenter anthology album seems like a bad choice right now…”

Domencia types furiously, changing version requirements in larger, then smaller, increments, backing out of changes, modifying tests, modifying code. Norbert and Jenell stand back, watching. The glow of Domencia’s rainbow keyboard starts to take on a red tint. The lights on Domencia’s headphones start to flicker, then turn from gamer green to solid red.

“I didn’t know they could do that…” Jenell remarks. The beeping of the plow starts moving past the window again—

And disappears. The yellow flashing light stops, too. The coffee machine starts brewing, unattended. “What the —” Norbert exclains. He starts to walk over and Jenell grabs his shoulder.

Domencia, chair, keyboard, and laptop are all hovering an inch off of the ground. Her screen has taken on the same red tinge as her keyboard and headphones. Domencia types furiously, muttering, “...bump this point release, reduce and narrow down minor version…”

“Norbert,” Jenell asks quietly, “does it look like Domencia’s laptop is...eating her?”

Domencia, chair, and laptop float away from the desk, and the bending becomes more prominent. The top of Domencia’s head is almost touching the top of her laptop, and her feet bend unnaturally toward the bottom of the computer.

Norbert gasps. “From both ends! She’s trying to fix this problem, and it’s just eating itself, and her!” 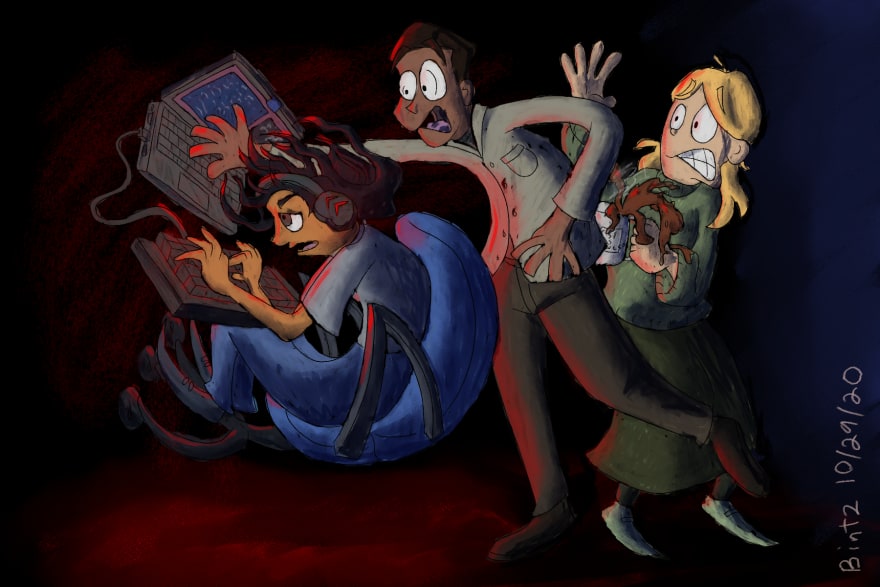 Just as Domencia’s forehead and toes are about to touch the laptop, Norbert rushes over, shoving Domencia’s hands aside. He quickly types and, as confidently as Domencia, slams the Enter key.

Immediately, all the lighting returns to normal. The plow, seemingly unstuck in time, continues its rounds. Domencia and her equipment fall to the floor.

“...dude...I was in the zone,” Domencia exclaims, breathless. She looks at the laptop, askew on the ground, and gets irate. “You deleted the whole directory?! But all the changes I made! I almost—”

She looks around. The HVAC system cuts off, and everything becomes silent. She stares up at Norbert and Jenell.

“Look, I was doing this for you, Jenell. I just wanted to make your deploys of ouroboros a lot easier.” She stands up. “But it’s snowy and I’m...really tired for some reason.” She closes up her laptop, unplugs her keyboard, and grabs her backpack from under the desk.

As Domencia slides the keyboard into her bag, Norbert notices, out of the corner of his eye, the backlights briefly flicker red.

Every developer gets dragged to dependency hell at some point in their career. It’s inevitable, especially since we’ve found that up to 20% of commonly used dependencies are unmaintained. Preventing this painful journey is one issue we hope a managed open source subscription like Tidelift  can help solve.

A one-day celebration of open source, the developers who use it, and the maintainers who make it.

Once suspended, tidelift will not be able to comment or publish posts until their suspension is removed.

Once unsuspended, tidelift will be able to comment and publish posts again.

Once unpublished, all posts by tidelift will become hidden and only accessible to themselves.

If tidelift is not suspended, they can still re-publish their posts from their dashboard.

Once unpublished, this post will become invisible to the public and only accessible to John Bintz.

Thanks for keeping DEV Community 👩‍💻👨‍💻 safe. Here is what you can do to flag tidelift:

Unflagging tidelift will restore default visibility to their posts.