Yesterday I kinda struck a nerve with my post Has Umbraco turned into the "tourist trap" of open source .net CMSs.

Seems altough the post is pretty negative a lot of folks feel the same. (if you check the feedback on linkedin/twitter/slack

Good news is the Umbraco CEO (Kim Sneum Madsen) has gotten in touch and wants to listen to the concerns. 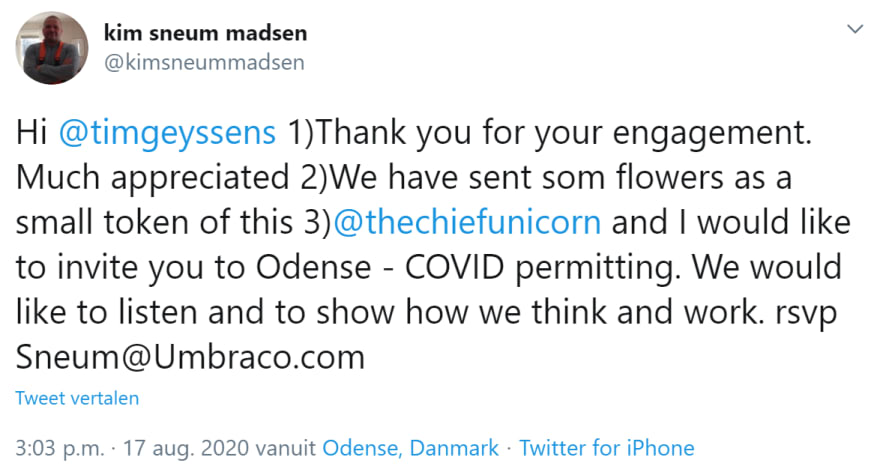 Instead of trying to play the CEO myself (I don't want to get into the business side of the umbraco HQ, yes money has to be made, otherwise the CMS will stop to exist). I thought I would just outline what it would take to keep me on board and keep loving and preaching Umbraco.

This has been a pain point since the first version of Umbraco and also one of the reason I started blogging to share my own knowledge over at http://www.nibble.be/ and now here on dev.to

Since then new version of Umbraco have come and gone and at times is hard to find the stuff you need (taking the correct version into account).

Since 2018 there has been a team: The Umbraco Documentation Curators but from what I can see they are kinda stalled in deciding the correct tool for the job...

The docs are stored on github and then with some webhook magic displayed on our.umbraco.org... this is ok but I do think currently there are better options that could use a look.

One thing I recently used was https://www.gitbook.com/... no more need for cloning down an entire doc repo to fix a typo... worry about linking saving/ images... all done in the browser.. with the concept of variants (so supports software versions)... so instead of worrying about also maintaining the tools for the docs the doc maintainers and contributers can focus on the things that matter, the documentation!

Besides a good platform I would also like to see docs as part of the checklist of a release... if you release a new feature but nobody knows how to use it...

Knowing umbraco has my back as a (web)developer

The web is constantly evolving and 1 of the things I find great about Umbraco is that it tries to use standards as much as possible (no custom templating engine, full control over markup/css/js,...).

So it's already a big task to create sites for clients, if Umbraco makes sure that it keeps up with proven web stuff and I have to worry less about which tools to choose for the job or what the new shiny new thing is in (web)dev that will be all the rage. That is awesome. So I do think stuff like graphql makes sense but as a lover of open source it would be nice if this could be included in the core CMS(I don't know the technicalities but that's the point in choosing an existing CMS, you don't need to worry about those).

Also it is nice to know that if you build a website with Umbraco your knowledge is still being grown and it's applicable outsite of the CMS. So as an Umbraco dev you are still a .net dev expanding knowledge and can move out of Umbraco without losing experience (you don't get that if you are only doing things specifically tied to a certain cms with a custom template engine/coding language)

Affordable learning options that are up to date

Especially with the global reach of the CMS and not everybody having sufficient funds to become certified I think this is an essential way to get new users the knowledge they need. https://umbraco.tv/ would pretty much be a no brainer for must of us if it had up to date details. In depth stuff (that isn't covered in the training) and you know that new items are released on it in a decent timeframe.

With the .net core version on the way imagine a person with a pi-top (raspberry pi powered laptop) in a less wealthy part of the world discovering the world of Umbraco cms, getting it running on his/hers laptop and being able to learn and start building sites.

At least some kind of forum participation from HQ

The forum is the easiest way to ask an Umbraco related question. In the early days you would even have the Umbraco founder himself answer your questions with detailed answers. But these last years that participation is getting lost. So would be ace if at least some member of the HQ staff would monitor the feed (it isn't that much) and try to reply with the info a new/existing users needs. If the answer would be, hey you need to get a support contract for that, that would also be perfectly fine...but now it feels the forum users are left in the cold.

A lifeline with the wider community

Of course now I got an invite to express my concerns but what would be good is if this was broadened up to the wider community. Partners/devs/package devs/content editors/... in order to pick the right direction I assume HQ would need to know what is an active topic amongst those folks...

I would say make up a small team the Umglourious Basterds
that collect the concerns and complains so that they don't get directed directly to HQ but are bundled, checked and validated before going that way (less frustrations).

And of course I want to walk the walk

So let's turn this negative vibe into a positive outcome. Since as an freelance Umbraco dev I'm kinda screwed if things go down.

Fetching and Rendering Sanity Posts on your Homepage

Once suspended, timgeyssens will not be able to comment or publish posts until their suspension is removed.

Once unsuspended, timgeyssens will be able to comment and publish posts again.

Once unpublished, all posts by timgeyssens will become hidden and only accessible to themselves.

If timgeyssens is not suspended, they can still re-publish their posts from their dashboard.

Once unpublished, this post will become invisible to the public and only accessible to Tim Geyssens.

Thanks for keeping DEV Community 👩‍💻👨‍💻 safe. Here is what you can do to flag timgeyssens:

Unflagging timgeyssens will restore default visibility to their posts.