During last year's Hacktoberfest, I decided to make a small, achievable extension for VS Code. It was a good way to learn TypeScript, work with people on Github projects, and most importantly: have fun!

The extension is called Light Switch — It is a time based, light/dark theme switcher. When I published my first series of commits to get started, I also wrote a post about it on DEV. I was sure this would help me get traction and a small following of people that would hopefully be willing to contribute in one way or another: 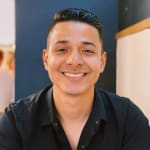 The post was well-received, and it got the traction I wanted. Once the rush came down, I still needed to figure out how to:

Here's how I achieved it.

If you're writing software, writing tests is an awesome way to ensure it will work. Since I did not have much time or experience with TypeScript, I made sure to focus my tests on the theme swapping logic:

Since my logic mainly involves time, I focused on time conversions. This is an example of the tests I added:

I'm sure many of you have a love/hate relationship with webpack. Yes, it's great, and also painful. Luckily, Microsoft has excellent documentation on how to bundle a VS Code extension - yay!

With this configuration, builds will be (by default) output into the dist/ folder at the root of the project. Nothing too fancy here!

Even though the webpack build points to the dist/ folder, tests are compiled to the out/ folder, which means we have to compile the app (Refer to the test-compile command of package.json. Luckily, this can be specified on the preLaunchTask, so I made sure it ran test-compile.

Getting this one right was a bit difficult, here's why:

You have to exclude node_modules. The caveat: If you have a dependency (not devDependency), you will have to include it. I had moment as a dependency, but was able to swap it for dayjs, even as a devDependency. Woosh!

As a general rule, ignore everything that is not the source of the app (including icons/images your app uses).

Making sure it runs!

The only dependency I needed was a global one: npm install -g vsce. vsce is a CLI for managing VS Code extensions.

Interestingly, this was the easiest part. I had to create an Azure DevOps organization, and I followed every step of this tutorial.

When creating the marketplace publisher, I was prompted for my Personal Access Token, which I generated following these steps.

My strategy for publishing would be:

Making sure it runs!

The command vsce package triggers the vscode:prepublish script from package.json configuration. A .vsix file will be created at the root directory. Install the extension by running code --install-extension extension-name.vsix. Replace extension-name for the file generated by vsce package, i.e. light-switch-0.1.0.vsix.

Once my extension was live, I had to implement the most important part: a CI pipeline. This is a great DevOps practice, as it automates all your builds, and runs your tests on new changes - This ensures new code won't break the app before being able to merge it into the master branch.

You can have a look at my pipeline build summary.

Here are some key takeaways I learned:

And here we have it! 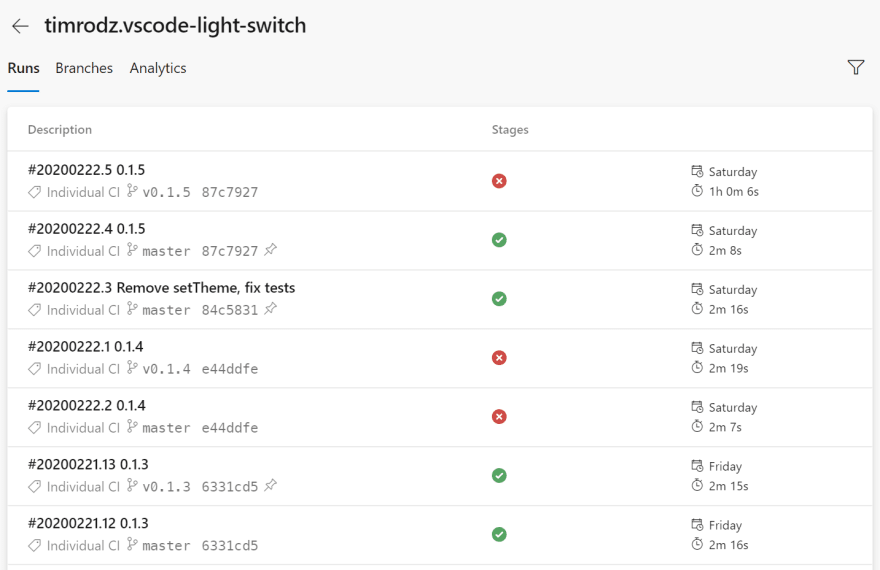 The last build had an error while building with Windows, but it was able to deploy the latest changes using the Linux image. See the build output.

A YAML configuration can run as many commands as you want. Think of every - bash: | entry as a set of new commands that will run in a specified batch. It can execute bash commands i.e. ls, pwd, echo, etc.

The last step, which publishes the extension, passes in a $(VSCODE_MARKETPLACE_TOKEN) variable. This is the Personal Access Token (PAT) we defined earlier on the Publishing section. If my variable was named secret, then the script would run yarn deploy -p $(secret).

The last build step has a condition: and(succeeded(), startsWith(variables['Build.SourceBranch'], 'refs/tags/'), eq(variables['Agent.OS'], 'Linux')). This conditrion tells our pipeline to deploy with builds that meet the following requirements:

The entire process did not take long, but figuring out the CI pipeline was the most complex part by far. Thanks to Microsoft's well-written documentation, I was able to put the pieces together.

Check out the official guide.

Have you published a VS Code extension? If so, how was your process? I'd love to learn about your experience!

Photo by Pierre Châtel-Innocenti on Unsplash.

How to generate a TypeScript client from a Swagger documented API

[ReactJS] From Javascript to Typescript

Tools to Make React Documentation a Piece of Cake! 👨‍💻