As I refine my stack more and more, one of the values I look for is simplicity.
Simplicity allows me to move quick and iterate much faster. Jotai provides that for me.

With so many state management libraries out there, why should Jotai even be considered?

Jotai structures state in a bottom-up approach which consists of atoms.
This is contrary to the way redux/zustand structures their state (a top-down approach).
Your preference may vary, but the way Jotai does it is more straightforward to me. 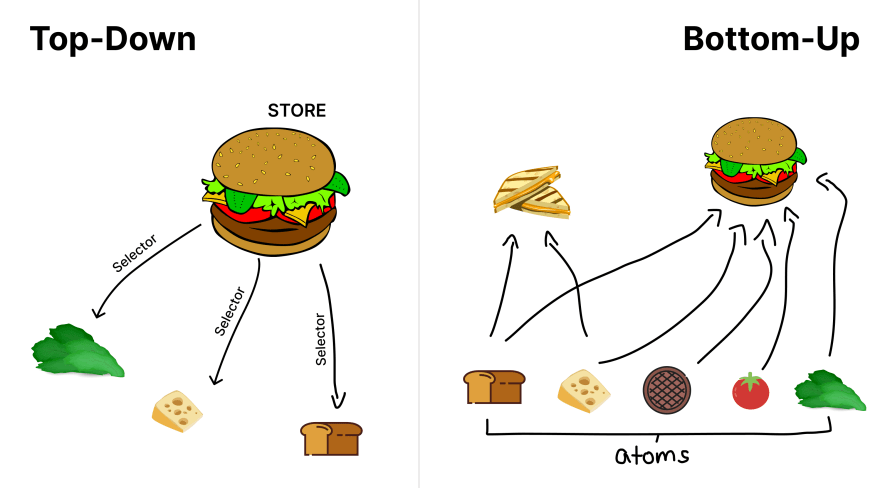 Using Jotai for the first time is quick --- very quick. Actually, let me show you.

Then use that atom anywhere in your component

It works as you would expect useState to work.

Jotai was born to solve the extra re-render issue in React.
Though most of the time this won't be an issue when using any popular state management libraries, it's still good.

This benchmark ran my machine with Ryzen 5 2600, Windows 11 Insiders Preview inside WSL2.
The write scores are low compared to the original benchmarks.
Most likely it's either because I'm running it inside WSL2, or its a machine difference.
To see the benchmarks ran on another machine go to this pull request.

There are a few more things as to why you should consider Jotai.

Atoms are at the core of Jotai, the building blocks to create your state.
I think the docs says it best.

State in Jotai is a set of atoms. An atom is a piece of state. Unlike useState in React, atoms are not tied to specific components.

These atoms are as simple as it gets. Just pass an initial value.

Derived atoms are atoms that depend on other atoms.
Whenever the atoms they depend on changes the value of these atoms also update.

There are three types of derived atoms:

To create a derived atom we must pass a read function and an optional write function.

The get is used to read other atom values. It reacts to changes of its dependencies.

The set is used to write to write an atom value.
It will invoke the write function of the target atom.

The value returned by the atom function doesn't hold any state.
It creates an atom config. We call these atoms, but it's important to know that these do not hold any state.
We'll see why in our next point.

Provider is used to provide state for a component subtree.
This means that we can use atoms in different locations, and they can have different values.
Providers can be used for multiple subtrees, even nested. It works just like the React Context would.

A Provider is not needed though, without it the atom will use default state it was defined with.

Jotai's minimalistic core API allows various utils to be built based on it.
My favorite is atomWithStorage.
It allows you to persist values in localStorage, sessionStorage, or for React Native AsyncStorage.
I find it to be perfect for theming.

The first parameter is the key within your chosen storage.

The second parameter is the initial value

Jotai can integrate with other popular libraries.
Here are some notable ones:

Jotai has first-class support for async. It fully leverages React Suspense.
They have fantastic docs. Check it out!

Jotai is my choice for global state management. Pair it with react-query, and boom!
You have straightforward state management all throughout. Don't be fooled though, simple does not mean powerful.

How about you? What's your state management solution?
You can contact me any time if you have questions or just wanna chat!

For more tips and tricks you can follow me on twitter. I also have a newsletter if you're into that.

Once suspended, tiu will not be able to comment or publish posts until their suspension is removed.

Once unsuspended, tiu will be able to comment and publish posts again.

Once unpublished, all posts by tiu will become hidden and only accessible to themselves.

If tiu is not suspended, they can still re-publish their posts from their dashboard.

Once unpublished, this post will become invisible to the public and only accessible to paolotiu.

Thanks for keeping DEV Community 👩‍💻👨‍💻 safe. Here is what you can do to flag tiu:

Unflagging tiu will restore default visibility to their posts.