This blog post is a summary of what I could understand from the first 2 chapters of this book.

Scope refers to a part of the program where variables/data declared in that part of the program are accessible to the program based on where they were declared. Confusing? Let's try one more time. A variable in any part of a program can be accessed by the program in other parts based on where the variable was declared/exists. This is where the term scope comes in to simplify things and make our understanding better by actually having some rules that help to predict/understand and access variables/functions easier.

What does compiling code mean?

What's the target/source? How does someone identify them?

Scope is defined during compilation phase, so you can't really change it during runtime. But JS also has ways do this through

So following way, you could still change scope during runtime but Kyle suggested avoiding this at all costs and they're not available in strict mode anyways.

Let's have a look at the code snippet that we used in the last section.

Now I am gonna explain/write what I understood through his metaphor and explanations. For an accurate mental model, I suggest reading this section.

So we have 3 different scopes we would say

How does scoping work in their bubble?

A scope can only access its outer scope and can not access scopes that are nested inside them.

⇒ So expressions inside BUBBLE1 can access marbles of BUBBLE1, not BUBBLE2, not BUBBLE3.

A conversation among friends

In this section, Kyle wrote about how these variables are put into respective bubble and scope buckets during compilation and how does the lookup happen for the marbles aka variables/identifiers during code execution based on bubbles.

Whenever JS engines would start processing code, it would happen in 2 phases

what does happen in the compilation phase?

what does happen in the execution phase?

We saw if the current scope doesn't have a variable/identifier then engine goes to next outer scope and asks respective scope manager. This stops once the engine reaches global scope. If engine doesn't find the variable in global scope as well then it results in an error. These errors are handled differently based on if they're target/source. Usually, a reference error is thrown.

In non-strict mode, when a program tries to assign a target reference a value and if value was never declared either in current scope or in next outer scope then scope manager(global) goes ahead and creates a new variable but this look should've resulted in failure. 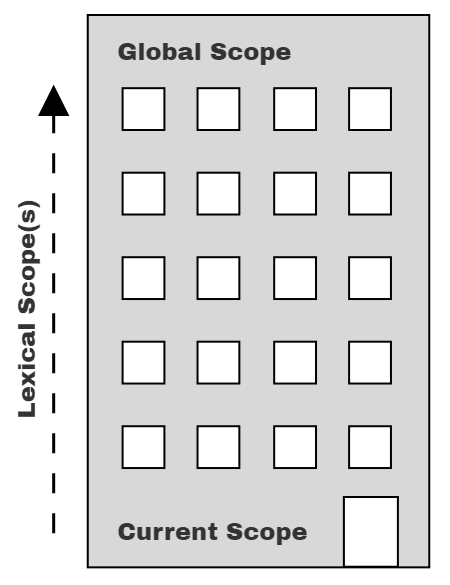 Kyle came up with one more metaphor is an office building. So if you're trying to resolve a target/source reference so you first start by searching the first floor and when you don't find that you proceed to search on the next floor and you do this until you reach last floor in building and you have no more floor to go.

Once suspended, tiwariaditya will not be able to comment or publish posts until their suspension is removed.

Once unsuspended, tiwariaditya will be able to comment and publish posts again.

Once unpublished, all posts by tiwariaditya will become hidden and only accessible to themselves.

If tiwariaditya is not suspended, they can still re-publish their posts from their dashboard.

Once unpublished, this post will become invisible to the public and only accessible to Aditya Tiwari.

Thanks for keeping DEV Community 👩‍💻👨‍💻 safe. Here is what you can do to flag tiwariaditya:

Unflagging tiwariaditya will restore default visibility to their posts.