Imagine the following scenario. You have a customer object in memory that has an Orders property that contains an array of Order objects. If a user never asks to display the Orders or use the data in it, then there is no particular reason to use system memory to create it. To avoid wasting system resources when the object is not used you can declare Orders object for lazy initialization.

By default Lazy objects are thread-safe. In multi-threaded scenarios the first thread to access the Value property of a thread-safe Lazy object initializes it for all subsequent access on all thread and all threads share the same data.

To define a lazy initialized type use Lazy. If no delegate is passed in the Lazy constructor the wrapped type is created by using Activator.CreateInstance when the value property is first accessed. If the type does not have a parameterless constructor, a run-time exception is thrown. In the following example we are going to create a Customer object containing an Orders property using Lazy initialization.

We are going to run the above in a console app and add a break point on line 12 before assign value on the orders variable.

If we now look at the Debug Output we can observe that orderList in customerOrders contains no Value. That is because of lazy loading orderList not yet been called.

If we step over the break point and continue we can see some interesting things. 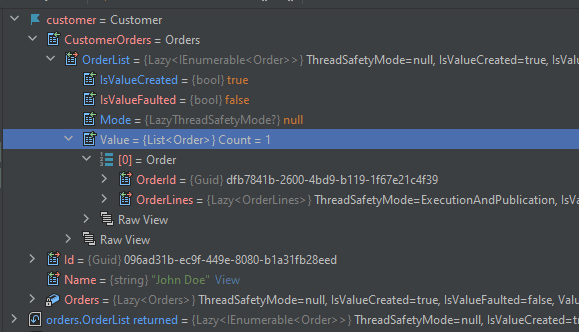 First of all the Value of orderList is now containing a list of orders and expanding that list we can see the populated properties of that value. Second we can see that now the isValueCreated is equal to true, this means that the instance has been created.

To sum things up, lazy loading is a great optimization technique that can improve performance of our application and save memory resources.

Why Data structures and Algorithm Interview Questions on Leetcode

Once suspended, tkarropoulos will not be able to comment or publish posts until their suspension is removed.

Once unsuspended, tkarropoulos will be able to comment and publish posts again.

Once unpublished, all posts by tkarropoulos will become hidden and only accessible to themselves.

If tkarropoulos is not suspended, they can still re-publish their posts from their dashboard.

Once unpublished, this post will become invisible to the public and only accessible to Theodore Karropoulos.

Thanks for keeping DEV Community 👩‍💻👨‍💻 safe. Here is what you can do to flag tkarropoulos:

Unflagging tkarropoulos will restore default visibility to their posts.